KAOS is a large, jet-propelled robot and the apparent Master of the Kremling Krew; he is a boss encountered during the events of Donkey Kong Country 3: Dixie Kong's Double Trouble! and Donkey Kong Land III.

KAOS is a large green jet-propelled robot with two square holes in corners, three lights, reel-to-reel and hazard stripes. KAOS has three heads: the first head is the helmet, second is alike the human head with sunglasses and last head is a cylinder with red eyes.

Months ago when the Crocodile Isle was destroyed, KAOS was being built by Baron K. Roolenstein (with the pots and pans of his wife) with the intentions to restore the Kremling Krew, revenge against the Kong Family and rule the world. But he needed a brain, so K. Rool captured Donkey Kong and Diddy to use the cerebral energy of both.

First is used for imprisoning Banana Bird Queen in a barrier with a crystal key and crystallize the Banana Birds. In Mekanos where Kremling remnants stay, KAOS (under control of K. Rool) is sent from there to lead starting with Banana Bird's imprisonment and conquer lands naming them the Northern Kremisphere.

He meets with Dixie and Kiddy for first time in Mekanos where battle begins. KAOS tried to roast the Kongs with rocket fire in soil and firing lasers with the first head, but is stomped in the head by the Kongs numerous times when he tried to push them with his boxing gloves to avoid which same climb in his blades. Defeated, he runs away from the factory and the first head is destroyed taking off the second ski.

His last meeting with the pair was in KAOS Kore, he try uses rocket fire again and launch missles by his true head, but is completely destroyed with barrels falling on the ground and taken him into the air by a crane hook. After this battle, it was discovered by the pair that KAOS was controlled by K. Rool.

After his creator is defeated, DK and Diddy appear and climb out of KAOS's shell revealing that were used as power sources. 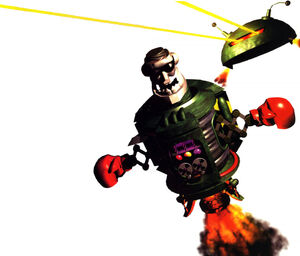 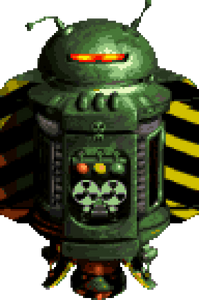 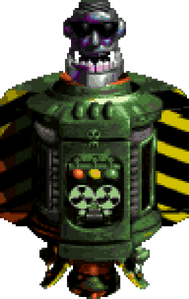 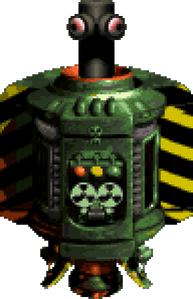 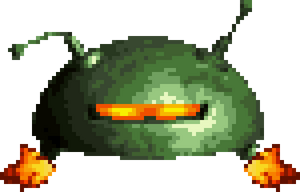 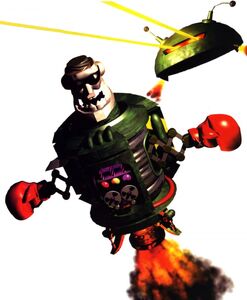 Retrieved from "https://villains.fandom.com/wiki/KAOS_(Donkey_Kong_Country)?oldid=3407366"
Community content is available under CC-BY-SA unless otherwise noted.