Usage of militaristic weaponry and equipment

The KGB (Russian: Комитет государственной безопасности), translated in English as the Committee for State Security are a major antagonist faction in the 2012 video game Call of Duty: Black Ops: Declassified, and a hostile faction in the campaign and multiplayer of the 2020 video game Call of Duty: Black Ops Cold War. The KGB were a secret police that acted as the main agency for the Soviet Union and the Soviet Armed Forces during the Cold War, and would send in operatives and spies to gather information for their country.

In Call of Duty: Black Ops Declassified, the KGB act as a hostile faction against the Central Intelligence Agency, attempting to stop Alex Mason from gathering intel from East Berlin in 1976. After the operation, CIA analyst Ryan Jackson reveals that the intel Mason recovered shows that the KGB have a spy ring running in West Berlin which is lead by Soviet Colonel and KGB spy Mikhail Belov. The colonel was tasked by the agency to run a front company in Berlin, and to gather intel for the Soviet human intelligence to one side of the Berlin Wall to the other.

The CIA tasked Mason with capturing Belov for interrogation, but the mission went south and the former killed Belov in self-defense. In 1979, the KGB later supported the Sandista National Liberational Front when they entered Managua, Nicaragua as they wanted to abduct an operative that the the KGB's counterintelligence burned. Mason was sent by Jackson and Jason Hudson to give sniper support for the operative, and successfully have him be secured.

When the CIA were hunting the Soviet spy "Perseus" and his spy network, their trail lead them to the KGB headquarters in the Lubyanka Building. The CIA use their double agent Dimitri Belikov to help Russell Adler and his team enter the building and collect the sleeper agents that Nikita Dragovich programmed during the 1960s. Belikov succeeded in having Adler and "Bell" enter the building disguised as Soviet agents, and they managed to gather the files on the sleeper agents from the archives while fighting KGB and Spetsnaz soldiers.

The CIA and MI6 were also tracking to eliminate KGB officer Vadim Rudnik, who was an associate of "Perseus" who helped him install sleeper agents in European governments. The player has the option to find evidence in missions and solving it by picking the correct suspects, who are under the code names the "Bearded Leady", the "Strong Man", and the "Juggler". Mason and Frank Woods are sent into a Soviet communications base in Uzbek to eliminate Rudnik, and can succeed before time runs out. If the player succeeds in eliminating Rudnik and correctly picking the right suspects who are sleeper agents, "Perseus" and his spy network will be crippled. 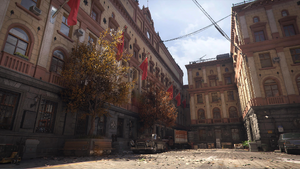 The KGB headquarters, the Lubyanka Building. 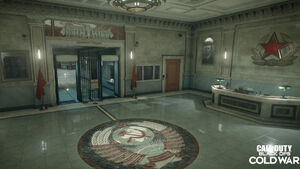 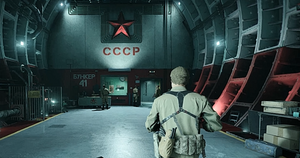 The command bunker for the archives in the Lubyanka building.