In the aftermath of the Battle of Chicago and the subsequent cleanup efforts, robotics conglomerate Kinetic Solutions Incorporated (abbreviated as KSI) stands poised to dominate the world's technological marketplace with cutting edge technology aimed at the consumer market. Headed by Joshua Joyce, many of the company's innovations are reverse-engineered from Cybertronian sources because that has worked out so well before.

Joshua Joyce began KSI as a boy, with a dream to make the world a better place. After the Decepticon invasion of Chicago, KSI began reverse engineering Cybertronian corpses in an attempt to create man-made Transformers for the U.S. military use. Joyce eventually came into contact with Harold Attinger who promised him the "Seed" with which he could make more "Transformium", the metal which all Transformers came from, in exchange for 500 million shares of the company. KSI built as many as 50 Transformers, all under remote control, including Stinger, Junkheap, KSI Sentries, "Two Heads", "KSI Bosses" and the Oreo Transformer. The pride of their CEO was Galvatron, a drone created using data from Megatron's severed head. Brains was forced to work for them and was tortured whenever he spoke. Because of this, he decided not to tell them that Megatron was still alive and manipulating KSI, more specifically the "Galvatron" prototype he wanted to use as his new body, resulting in it always looking like him instead of Optimus Prime.

Megatron's mind equally made Galvatron capable of acting on his own and able to override the other drones. Attinger informed Joyce that a civilian had hacked their tech and knew of KSI's involvement in the Transformer hunts. Fortunately for Joyce, the civilian came to him, who he happily turned over to Attinger. However, KSI would soon suffer a crippling blow to their operations.

The Autobots eventually learned of what KSI was doing and were very ticked. Optimus Prime was enraged to the point that he ordered his men to storm KSI's Chicago headquarters and he did not care if humans were caught in the crossfire. When the Autobots arrived, they made a point to cause as much damage as possible. They destroyed most of the inactive prototypes and the Oreo Transformer along with the laboratory before Joyce convinced them that KSI was defending Earth from attacks just like the one they were committing and that humanity did not need the Autobots. Visibly disgusted by Joyce, Optimus ordered his men to retreat. Before they left, they freed Cade and Brains.

When the Autobots left, Attinger forces Joyce to deploy the only two drones that were spared: Galvatron and Stinger against them.

Unknown to KSI, Megatron managed to transfer his mind to Galvatron, eager for revenge on Optimus. When the drones were deployed, Galvatron killed civilians freely and even spoke. When they were recalled, Joyce had all the prototypes moved to a Chinese facility and expressed his fury that Galvatron had malfunctioned. Joyce's confidence turned shaky after Attinger revealed that he had been backing KSI's Transformers project alone, not the CIA as he had been led to believe, effectively making Joyce an unwitting war criminal. After a call from Cade Yeager alerting him of Galvatron's true nature, Joyce placed Galvatron under tight security. Regardless, Galvatron activated himself, announced to the humans that he was his own being and took control over all of their drones. He had them destroy the facility and find the "Seed". All the prototypes were destroyed in the subsequent battle with the Autobots and Galvatron fled. In the aftermath, Joyce seemed to have renounced building new Transformers.

"KSI Bosses" are man-made Transformers manufactured by (believe it or not) KSI.

Several KSI Bosses were built by Galvatron to capture the Seed in Hong Kong with the goal of cyberforming the Earth. Hound killed one of KSI Boss soon afterwards. Another was set getting crushed by Scorn, and burned and bitten by Grimlock. The remaining KSI Bosses were killed when Optimus Prime set off Lockdown's grenade to force Galvatron's army into retreat. 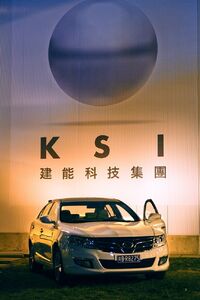 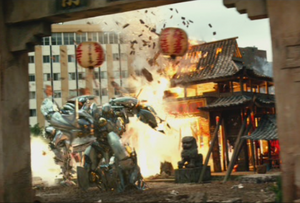