NOTE: This article is about the incarnation of Kaa from the 2016 movie. The mainstream version can be found here: Kaa (Disney)

Kaa is a supporting antagonist in the 2016 Disney live action film The Jungle Book, a remake of the 1967 animated classic film of the same name.

She is an enormous anthropomorphic Indian python who tries to eat the man-cub Mowgli. She is also based off her original incarnation with the same name.

She was voiced by Scarlett Johansson in motion capture in her first villainous role.

Kaa first appears when Mowgli stumbles upon her territory deep in the forest after he is separated from Bagheera by the villainous tiger named Shere Khan, where he discovers her shed snakeskin. After climbing into the trees and chasing animals that stole his food, Kaa begins to speak to him from above the trees before revealing herself to him.

Luring him in by promising to keep him safe, Kaa hypnotizes him and reveals that Mowgli came to live in the jungle because Shere Khan killed his father as they were traveling between villages, and that Bagheera later found Mowgli and brought him over to the wolves for protection.

She also reveals to him the power of the "Red Flower" (also known as fire) and its dangers in her vision. During her storytelling, she attempts to devour him, but a passing sloth bear named Baloo attacks Kaa and successfully rescues Mowgli, freeing him in the process.

Kaa is not seen again for the rest of the film; it is unknown if Baloo infrequently killed her or she went away and never came back. However, during the end credits, she is still alive and heard singing her song "Trust in Me", though this could simply be the music of the ending credits.

In this incarnation, Kaa is far more menacing and intelligent than her cartoon counterpart. She is extremely manipulative, duplicitous and persuasive, using her hypnotic eyes and compellingly seductive voice to lull her prey into a false sense of security incredibly effectively.

She is shown to be very knowledgeable and intellectual, being precisely aware of how Shere Khan came to hate Man and how Mowgli even came to be an adopted cub with the wolves. She is also terrifyingly calm and composed, never raising her voice, so as not to draw away her prey. She is also shown to be very imaginative, cunning and smart, able to feign a compassionate and empathetic personality to pull Mowgli into her trap.

Obviously, her immense size makes her extremely powerful, and she is unafraid to grapple with a bear the size and weight of Baloo. However, she was unable to defeat him, while Baloo is stronger than her. Despite her conniving and treacherous nature, she is shown to be harmonious and tuneful when she sings her song "Trust in Me". 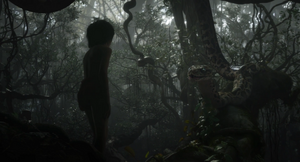 Kaa introducing herself to Mowgli. 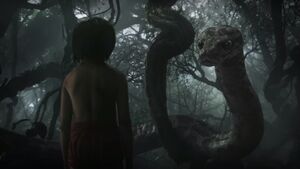 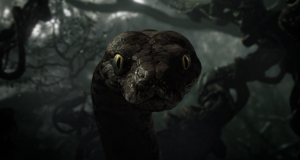 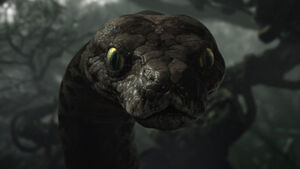 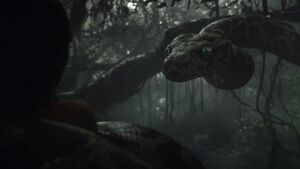 Kaa coiling Mowgli as she tells him about how he came to the jungle. 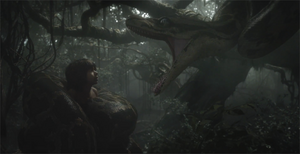 Kaa attempting to devour Mowgli before she was attacked by Baloo. 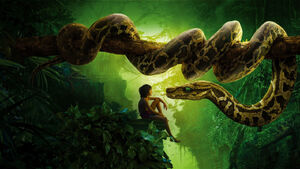 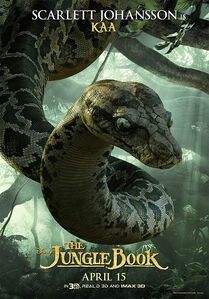 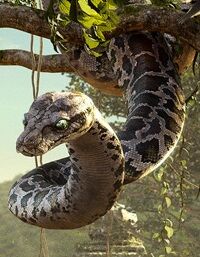 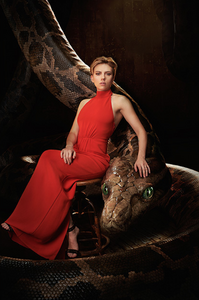 Scarlett Johansson with her character. 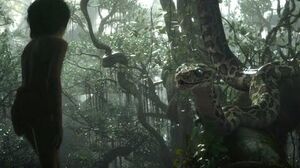 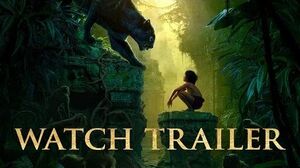 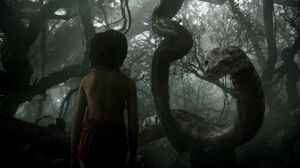 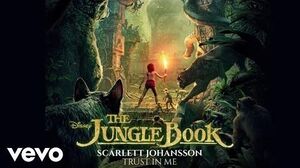 Scarlett Johansson - Trust in Me (From "The Jungle Book" (Audio Only))