The Exploding Man
The Unpoppable

Can inflate himself until he combusts

Destroying everything just to show to everyone his superpower.

Joe Blow, better known as Kablamus, is a mutant antagonist of The Mask The Animated Series. After falling into chemicals, he gained the special ability to inflate his body like a balloon, explode without dying, and even return back to his normal size.

The mutation gives him an indestructible, and also pale skin. He only wants revenge over the kids who didn't buy his balloons, and destroy the entire city with a plutonium primer explosion to show everyone that popping is what makes balloons so great.

He was voiced by Jim Cummings, using the "Sterling Holloway" lisp.

Prior to his mutation, Joe Blow was an inventor obsessed with balloons, who was trying to understand why kids didn't appreciate his inventions. At the time, he was also reading the same book the Mask had by Dr. Neumann, so it would give him a muse at the psychology of why kids love balloons.

His big goal at the time was to create the Holy Grail of balloons: one that never pops.

But eventually, Joe's trial run of his creation malfunctioned as the inflating balloon tipped him over into the experimental latex rubber, before it blew up the whole factory into ashes. By chance, we found out that Joe had miraculously survived from the destruction of his factory, without a single scratch.

Without understanding what happened after the balloon explosion, Joe started to feel weird, feeling his skin become tingly. Somehow, Joe's body started to inflate with air like a balloon, staying absolutely still. Unable to do something, the scared Joe began to accept the inevitable- he was going to blow. The tiny man was now a giant human balloon, and after reached an amazing size, finally, Joe exploded in pieces.

Ironically, defying all of the laws of nature, Joe somehow had his body reformed immediately after the explosion. Seeing how he has become a freak of nature, he thanks reverse psychology for understanding this 'unique' ability he was given and dubbed himself: KABLAMUS, THE EXPLODING MAN.

After discovery what he became, now Kablamus, Joe started a master plan of taking revenge on the kids who didn't like his balloons. But first, he wanted to show to the city who is he, and what could he do.

His first strike was a fight against a Bomb Squad, who couldn't do anything to beat Kablamus.

As he learns to control his powers, every time he inflates and explodes, he gets bigger and bigger. This was proven when he used the Plutonium Primer, he gets to the size of a skyscraper. He can also inflate other parts of his body other than his torso, such as exploding his legs to jump from high places. In the episode "The Power of Suggestion", he can inflate himself as a method to float up in the air.

Presumably of celtic descent, his overall bodily hue became a slight greener color including his split styled red hair and his large nose (for the latex rubber he fell in was green). Also being very overweight, Kablamus's body shape is typical of short-tempered villains with the Napoleon complex: his normal height is smaller than the average male.

He wears a blue body suit with orange highlights, black gloves and boots. He also has a belt that holds his primer blaster caps, and a chest-plate to which he inserts a primer charge to modify his explosion attacks (eg. tear gas). 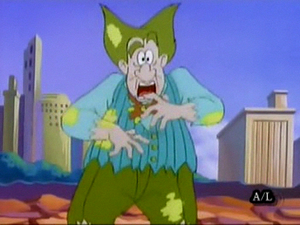 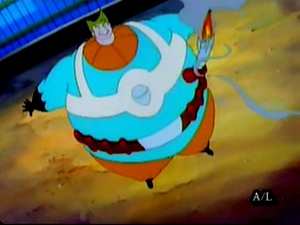 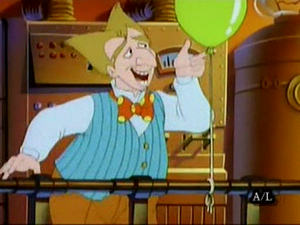 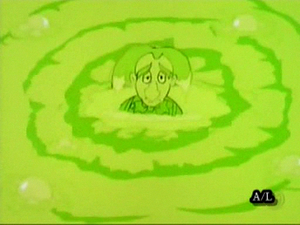 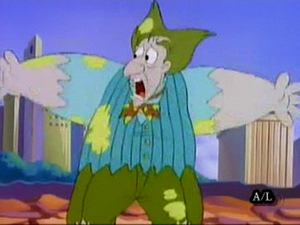 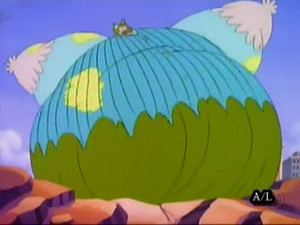 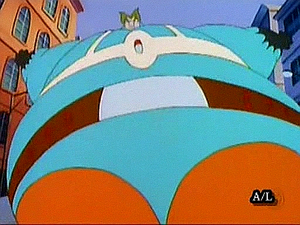 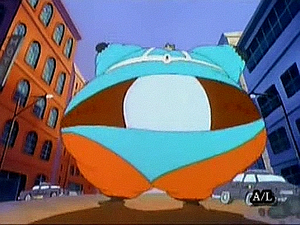 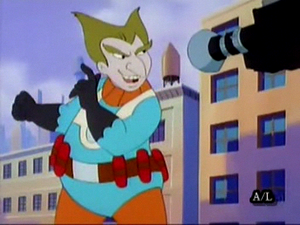