Be crowned "king of all drift racers" (failed).

Kabuto is the main antagonist of Pixar's Cars Toon Tokyo Mater and a cameo character in Cars 2.

Kabuto is a spoiled and obnoxious drifter, that resides in Tokyo. He somewhat resembles Boost, due to being highly modified and having a similar make model.

After losing a race against Mater, he was stripped of any and all modifications, thus turning him into "stock". However, he is seen with his modifications in all of his future appearances. Kabuto is a Kyoku Jitsu and is designed to resemble Boost. He is also modeled after a 1994 Mitsubishi Eclipse.

He is painted gray, with black lining and rims. His rims are outlined in red, and red lining elsewhere on his body. He has three spoilers mounted on his back and a gigantic yellow modification on his roof. On his doors, he has long rectangles with red dots and white squares.

Kabuto's grudge against Mater started when Mater accidentally ran into him after towing Ito-San to Tokyo. After becoming extremely angry with Mater, Kabuto challenged the tow truck to a drift race. He tells Mater that he must race him to the top of Tokyo Tower, and whoever reaches there first will be crowned "King of all Drift Racers", and that the loser will be stripped of all modifications and become "stock." When the race begins, Kabuto tries to cheat his way to victory by constantly pushing Mater off the road, and later by summoning his ninjas to attack him.

Fortunately, the ninjas are all defeated by Dragon McQueen, but it turns out to be a distraction so that Kabuto will reach the tower first. When Mater is launched into the air by McQueen and lands on the very road leading up the tower, Kabuto becomes furious and pushes Mater off the balcony, but Mater uses his winch to get back up and reaches the finish line at the top of the tower. In the end, Kabuto loses, and as a result, he is stripped of his modifications, and is last seen being laughed at by his own ninjas and crying in humiliation.

In Cars: Race-O-Rama, Mater must compete in a drift race that is very heavily based on the events of Tokyo Mater. Kabuto appears as the only opponent during the race, with the exception of VS mode, where he is replaced by Dragon Lightning McQueen. The race goes around the streets, through a traffic jam, into a construction site, through a pipe, and finally up Tokyo Tower.

In Cars Toons: Mater's Tall Tales: The Video Game, Kabuto makes an appearance as a supporting character in the Tokyo Mater set of minigames.

In Cars 2, Kabuto makes two quick cameos as a background car, first when Lightning McQueen is driving through Tokyo with Mater and his team, and then at the welcome party for the World Grand Prix. Kabuto is seen with all his known modifications, despite Tokyo Mater ended with him losing all of them. This may be seen as a proof that the events of Mater's tale were made-up and never happened. It can be noted that the Cars Toons episode in question is the only in which Mater fails to prove efficiently the reality of his story. However, other suggestions include that it could be another car that looks like Kabuto or that he got his modifications back after the story if it did happen. 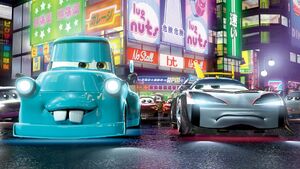 Kabuto in the videogame