One of the Crypters
A-Team Member (formerly)

Defeat Ritsuka to prove himself.

Save the world with his Lostbelt.
Make Anastasia an Empress of Russia Lostbelt.

Participation in the Attack on Chaledea

Participation in the Crypter's plans

Kadoc Zemlupus is a major antagonist in Fate/Grand Order: Cosmos in the Lostbelts. He first appears as the secondary antagonist of its prologue, before appearing as the main antagonist of its first chapter, Anastasia: The Permafrost Empire.

Residing in Russia Lostbelt, a Lostbelt formed 450 years ago and based on Tsardom of Russia, Kadoc is the Master of his Lostbelt Caster, Anastasia Romanova. He was formerly one of 48 Chaldea Master Candidates and a former member of A-Team. He secretly plans to take over the Lostbelt from Ivan the Terrible by manipulating Anastasia into ursurping his position as the Lostbelt's Tsar, in order to expand the Lostbelt and plant down its Fantasy Tree.

He is voiced by Kenji Akabane.

An average mage but he had high Rayshift compatibility, Kadoc doesn't stand out among Team A but has a nice, though self-deprecating at times and pessimistic, personality. He was going to get Caster, as he had little mana capacity and needed a Servant who would use mana efficiently, and ended up summoning the last Russian princess Anastasia Nikolaevna Romanova.

Before the start of the story, Olga Marie Animusphere orders A-Team to participate "Singularity Point F". With Lev Lainur's betrayal, Kadoc was amongst the casualties to be put into cryofreeze in their coffins

During the prologue of Cosmos in the Lostbelt, Kadoc is revived by the Alien God and betrayed Chaledea, freezing it with Anastastia's Noble Phantasm during Kirei Kotomine's attack. Later, after the formation of the Crypters, Kadoc is sent to a Lostbelt in Russia. This Lostbelt diverged in 1570 AD when an asteroid hit Earth during Ivan the Terrible's rule and caused an unending ice age. His Difference Depth is rank D.

Kadoc appears as a minor character in the second chapter. Due to the death of Anastatsia, he has lost his Command Spell. During the Chaleda crew's travel towards Norse Lostbelt, they discussed about every methods of interrogating Kadoc since he refused to speak, before Goldolf brought up the idea to feed Kadoc with delicate foods to lure informations.

However, soon afterwards. the Shadow Boarder was attacked by Kirei Kotomine/Rasputin and Sigurd (later revealed to be possessed by Surtr) together. Kadoc seized the chance and escaped from the Shadow Boarder, as Sigurd attacked the Chaledea crew and heavily injuring Holmes in the process, while Kirei/Rasputin recapturing Kadoc and forcing Goldolf to give in Paper Moon. Goldolf had to comply as a strategy in order to save the crew. Kirei/Rasputin then left with Kadoc and Sigurd, before stating to Kadoc that he had more plans planning upon him.

After the death of Ophelia Phamrsolone, Kadoc was successfully escorted back to Kirshtaria's Lostbelt and soon afterwards, he participated a meeting with the other five surviving Crypters. 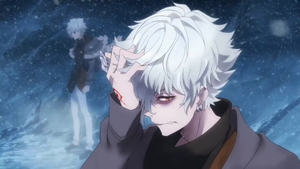 Kadoc in the animated Preview