Spreading the Bugster virus to trap people in Hurricane Ninja.

Create an "eternal heaven" for his daughter to live and play in.

Kagenari Nagumo is a former Machina Vision employee with the power to transform into the ninja-like Kamen Rider Fuma and the secondary antagonist of the 2017 film Kamen Rider Ex-Aid the Movie: True Ending.

He was portrayed by Yoshikuni Dōchin.

Kagenari Nagumo was absent from his daughter Madoka's life as she grew up as he was often away at work and she barely even knew what he looked like. When his daughter became terminally ill, Kagenari began seeking to make it up to her by working with Machina Vision's CEO Johnny Maxima to create the virtual reality game Hurricane Ninja, which Kagenari intended to use to give his daughter an "eternal heaven" without despair to play in. When Kagenari was ordered by Maxima to start another Bugster virus to obtain players for the game, Kagenari made sure to select his daughter as one of the players. Maxima expressed suspicion at the choice but Kagenari assured him that she would be a perfect choice for their experiment.

As Kiriya Kujo questions Johnny Maxima, Kagenari attempts to usurp the CEO by trapping both him and Kiriya in the Game World. As Fuma, Kagenari leads his Ninja-Players to attack a car that he suspects is carrying Emu Hojo. Kuroto Dan transforms into Kamen Rider Genm Zombie Gamer Level X-0 and attempts to fend them off, but is unable to keep them away from the car. However, Fuma discovers that the car is not carrying Emu but in fact Parado and that the whole thing was a distraction to keep him away from Genm Corp. Parado transforms into Kamen Rider Para-DX Perfect Knock-Out to do battle with Fuma but Fuma flees using Stage Select and leaves behind his Ninja-Players to fight the two Kamen Riders.

Kagenari then enters the game world and tries to attack Emu Hojo, angered that he is intruding in his "eternal heaven". Shifting into Kamen Rider Ex-Aid Creator Gamer with the Mighty Creator VCX Gashat, Emu fends off Fuma's attacks and traps him on a bridge platform before defeating him with a Mighty Critical Strike. Emu then uses the Mighty Creator VCX Gashat to create a portal back to the real world which sucks all of the trapped players out of the game, save for Madoka who chose to stay in it.

Captured by the Riders, Kagenari confesses to them that he only wanted to create a virtual world for Madoka to be happy in as her life in the real world was full of sickness and pain. Emu responds to this by telling Kagenari that if he cared he should not have given up on her life when she needed him most. Kagenari attempts to defend himself but Emu does not buy it. Their conversation is interrupted when Johnny Maxima appears and tells Kagenari that he "saved" Madoka. Maxima then reveals himself to be another red-and-gold version of Gamedeus called Gamedeus Machina and forces Kagenari back in line under him. After overpowering the Riders, Gamedeus Machina exits with Kagenari.

Back at Machina Vision Johnny Maxima and Kagenari Nagumo prepare to execute the final stages of their plan. Kagenari is hesitant to go through with it but assures himself by believing that there is nothing in the real world Madoka will miss. As Kiriya and Taiga arrive at the Machina Vision headquarters, Kagenari goes out to confront them and transforms into Kamen Rider Fuma. Transforming into Kamen Rider Lazer, Kiriya fights Kagenari and calls him a lousy dad for not being at the hospital during his daughter's operation but the thought of his daughter being operated only makes Fuma angry at Lazer. Eventually, Fuma is defeated by a combination of Snipe's Bang Bang Critical Fire and Lazer's Shakariki Critical Strike. Gamedeus then shows up and beats back the two Riders while Emu goes to talk to Kagenari. Emu tells Kagenari that the only thing Madoka needs is for her father to be there for her to give her the willpower to live on, causing Kagenari to realize the error of his actions. Lazer then offers to take Kagenari to see Madoka and Kagenari accepts.

Arriving at Seito University Hospital, Kagenari heads to his daughter's room and rushes to her side. Apologizing for not being there for her, Kagenari starts to cry and promises that when Madoka wakes up he'll always be there for her when she needs him. Hearing her father, Madoka wakes up and father and daughter are reunited at last.

Some time after the defeat of Gamedeus Machina, Kagenari and his wife Akemi go to check up on Madoka at the hospital. Madoka asks her parents if they can bring her to a real athletic meet some time to which they agree.

Kamen Rider Fuma was summoned by Another Decade to fight Zi-O and Geiz. This version of Fuma originated from an alternate world where he succeeded in his goal of trapping everyone on Earth in his "Eternal Paradise". 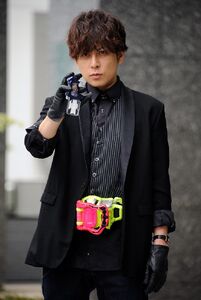 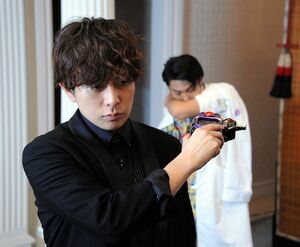 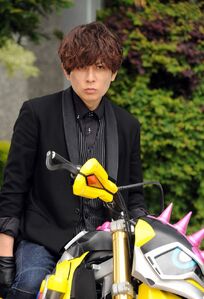 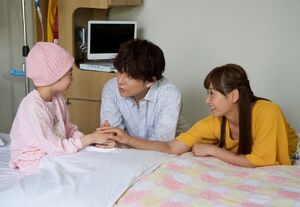 Kagenari reconciles with his wife and daughter. 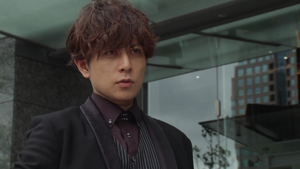 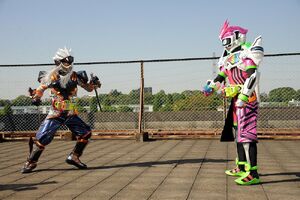 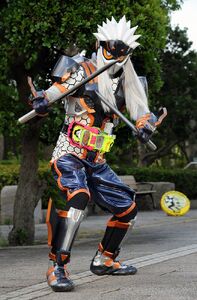 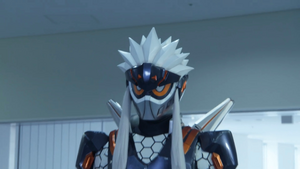