Kagerou Imaizumi is a werewolf and one of the youkai that joined the Youkai Rebellion when the magic burst side-effects of the Lucky Mallet gave them more power. She's the third boss of Touhou: Double Dealing Character, since she went berserk due to her new capabilities. Kagerou, like Wakasagihime and Sekibanki are recurring characters now.

Like all werewolves, she is able to transform into a wolf during the full moon and is able to change between forms during battle if she uses a spellcard. According to her profile, she is a Were Honshu Wolf and her species is extinct in the outside world. She hangs around the Bamboo Forest of the Lost because the youkai of the moon built a mansion there, and because that's probably the place closest to the moon and its effects.

In her wolf form, Kagerou has dark brown hair and red eyes. She has two wolf ears, long red nails; and wears a long, blue-white and red dress, ending in a black trim with a cobweb pattern. At the neck of her dress is a red amulet. 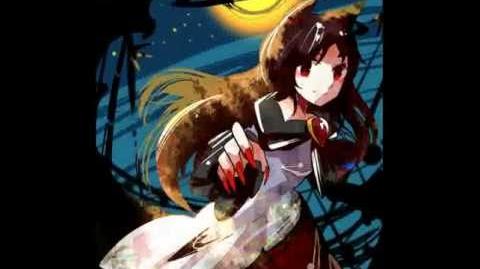