Inuyasha: The Castle Beyond the Looking Glass

Princess of the Heavens

Freeze time and rule over a world of Eternal Night.

Kaguya is the main antagonist of the second Inuyasha movie Inuyasha: The Castle Beyond the Looking Glass. Her character is known from the popular Japanese classic The Tale of the Bamboo Cutter. In the Inuyasha adaptation, Kaguya is a youkai who absorbed the powers of a celestial being, thus gaining her powers. She even started referring to herself as a celestial being, even though she was technically still a demon. After Naraku's apparent death, she plotted to free herself from the mirror she had been sealed in by Miroku's grandfather, Miyatsu, which she had been hiding in for fifty years, waiting for Naraku to die. She then attempts to freeze time forever and rule over a world of 'Eternal Night', but was defeated by Inuyasha and Kagome and killed by Miroku.

She was voiced Mieko Hirada in the Japanese version and Nicole Oliver in the English version, who also voiced Henna in Barbie: Mariposa series, and Dame Devin in Barbie: Princess Charm School.

Kaguya absorbed a celestial maiden, taking her appearance, name, and immortality, calling herself the Princess of the Heavens. She intended to use the Celestial Robe to stop time in order to bring eternal night, and rule the world as its queen. She would stop time without remorse and destroy all living things in her wake, and when she was active, there would always be a full moon, which would change color. However, she eventually encountered a monk named Miyatsu. Unable to bring himself to kill a beautiful woman, Miyatsu sealed Kaguya inside a mirror, which he hid at a shrine in the Forest of Illusion. The only way to release her was to gather the five items told in the fairy tale of Kaguya and drop them each in one of the five lakes around Mount Fuji.

She was eventually discovered and awakened by Kagura and Kanna following the supposed death of Naraku, whom she feared, having apparently encountered him. Promising to give Kagura freedom if she and Kanna released her, Kaguya raised her Dream Castle from Lake Motosu, going forward with her plan to exterminate all life. Kagura and Kanna collected the items and released Kaguya, who fought Inuyasha. When Kaguya reflected one of Kagome's Sacred Arrows at Inuyasha, Kagome took the hit for him, pinning the Celestial Robe to her back when Akitoki Hojo threw it to try to protect her. Kaguya offered to turn Inuyasha into a full demon if he became her servant, but he told her to go to hell, so she took Kagome to her Dream Castle, telling Inuyasha to meet her there.

Kagome's wound was healed by the Celestial Robe, which Kaguya reclaimed. Kagura and Kanna turned on Kaguya when they realized she wasn't going to keep her word, so she paralyzed them and sent them to the bottom of the lake. Then she froze time, but Kagome, being from the future, was unaffected, as was the rest of her team due to being protected by items she brought from the future. Kaguya decided to eat Kagome for her power, and when Inuyasha faced her, she turned him into a vicious full-demon, but Kagome was able to return him to his senses through her love for him, and they shared their first kiss.

In the middle of Inuyasha's fight with Kaguya, Naraku revealed himself to still be alive, having faked his death in order to draw Kaguya out and absorb her, which would make him immortal. Kaguya overpowered Naraku, and while Inuyasha fought her, Kagome shot her mirror with a Sacred Arrow, allowing Inuyasha to destroy her body with Wind Scar.

However, Kaguya survived in a disembodied form resembling a cloud of darkness and continued to try to absorb Kagome. Naraku attempted to absorb her but was temporarily defeated by Inuyasha, and Miyatsu's grandson, Miroku, absorbed Kaguya with Wind Tunnel, destroying her once and for all.

Kaguya is widely recognized for her beauty. In fact, it was her attractive features that saved her from being sucked into the monk Miyatsu's Kazaana and led to her being sealed inside the Mirror of Life instead. As Princess of the Heavens, Kaguya has long black hair, with a slight blueish tint, that reaches down to just above her knees. Her hair is parted down the middle and two, long strands of hair that pass in front of her hair reached down to her chest. Both her eyes and eyelids are turquoise, framed by very long eyelashes and dark eyebrows. Her lips are colored a light purple. Kaguya also has very pale, delicate skin, which contrasts greatly with her dark hair.

As the Queen of Eternal Night, her true form, her features change only slightly, as her eyelids shift to magenta and her lips become blue. Her eyelashes become much longer and thicker, the lower lashes gathering together into jutting points, giving her a menacing appearance.

As Princess of the Heavens, Kaguya wears a very intricate kimono, befitting a woman of her stature. The colors of her multiple layers are from innermost to outermost: khaki, dark green, off-white, and purple. The only layers exposed at her feet beside her purple outer-kimono is the topmost, off-white inner-kimono. As is the custom with such clothing, Kaguya's sleeves are very long. Curiously, unlike most kimonos worn by women, Kaguya has no obi sash that ties her kimono together. As such, her robes flow loosely when she floats or flies, billowing in some places rather unflatteringly, similar to Miroku. Kaguya also wears pearls around her neck; this piece resembles Inuyasha's Beads of Subjugation, due to the turquoise, tooth-like beads that separate every third pearl from the next three pearls. However, the color scheme is different (Kaguya having turquoise beads with pearls, while Inuyasha has grey fangs with black beads) and numbering as well, as Inuyasha's beads are grouped into fives, not threes. Kaguya also adorns her hair with two fin-like kanzashi hair-ornaments, both a light purple. It is not clear what sort of footwear Kaguya employs with her kimono, but in keeping with the fashion she wears, it can be assumed that she wears bamboo sandals with tabi socks.

As the Queen of Eternal Night, Kaguya's style of dress becomes far more macabre and menacing. Discarding her kimono, Kaguya wears a very distinct set of armor. It is comprised of shell-like pauldrons with red edges on her shoulders and a double-breasted plate on her chest that wraps around her back as well. This central plate connects in the middle of her chest with a large red coil. Similar coils wrap around the vambraces on her forearms (made of the same material as her other armor pieces) as well as the forearms themselves. These can be used as weapons to ensnare or impale her enemies. The center coil that runs from her breastplate almost resembles a segmented worm of some kind with tendril-like pieces jutting out above her collar bone. A coiled circle in the middle forms the centerpiece of her armor and is located just above her heart.

From her pauldrons drapes a large, red, floor-length cape. Kaguya also wears a black, floor-length skirt, and tied around her waist by a red, floor-length sash. She replaces her earlier fin-like ornaments with three hairpins (two on one side of her head, one on the other), which she can enlarge at will and use as swords. Contrasted with her kimono, Kaguya's armor is far from conservative and is very revealing and provocative. Kaguya also wears a peculiar type of armored legwear that protects her shins and feet but leaves her toes uncovered. While it is in her possession, the Celestial Robe floats around Kaguya's waist, tied in two knots at the front. The Robe circles her back in a loop and connect to the first knot. Below is another, smaller loop, that connects, by way of the second knot, with the rest of the Robe, which is tied in a bow, with two large loops that hang about Kaguya's legs.

In her guise as "Princess of the Heavens", Kaguya acts in a very refined manner, like any high-born member of the nobility, as her title would suggest. She is almost always smiling and seems to keep herself in a good mood at all times. She often recites poetry from the original. 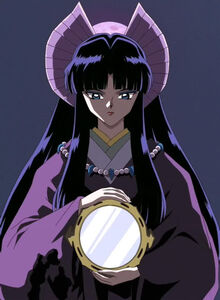 Kaguya as the Princess of the Heavens. 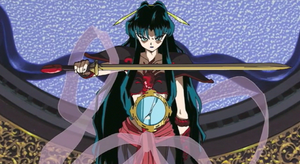 Kaguya as the Queen of the Eternal Night. 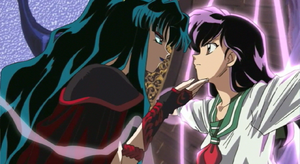 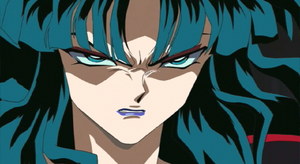 In her demon form, Kaguya is prone to violent outbursts of anger. 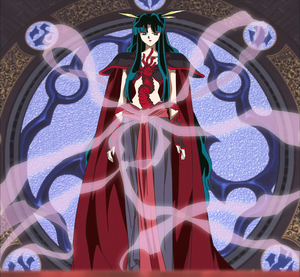