The Kahgarak are the elite breed of the Visorak, spider-like Rahi that served as the minions of the Brotherhood of Makuta in the BIONICLE series.

Unlike the Visorak that came in six different breeds, the Kahgarak themselves came into two different types: blue and gold.

Kahgarak, like the all the other Visorak, were once created by Makuta Chirox on the island of Destral prior of the main event.

Being part of the Brotherhood of Makuta's armies, they were led by Sidorak and Roodaka, king and viceroy of the Visorak Horde, after they were trained by the another Makuta, Gorast. The hordes then invaded a number of islands, mutating native Rahi creatures in the process.

After the takeover of the island of Metru Nui, the Kahgarak often led the smaller Visorak groups on the hunts and served as the guards for the Coliseum and other strategic sites during the invasion. When Sidorak and Roodaka

Kahgarak have a natural Rhotuka launchers which can fire the spinner that can be used in battles as well as opening a portal to the Field of Shadows. 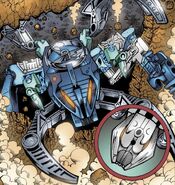 Kahgarak as seen in the comics.

A gold-shelled Kahgarak that appeared in the 2005 Battle for Metru Nui BIONICLE playset. 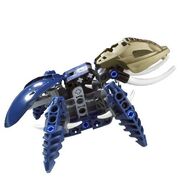 The Kahgarak as it appears in the 2005 Tower of Toa BIONICLE playset. 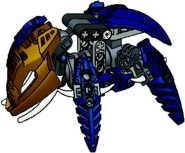 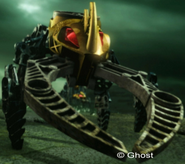 The Kahgarak in the commercials for the playsets.

Roodaka rides on the back of the Kahgarak.
Add a photo to this gallery

Retrieved from "https://villains.fandom.com/wiki/Kahgarak?oldid=3414481"
Community content is available under CC-BY-SA unless otherwise noted.