Over 10,000 years ago since the death of Outworld's original ruler known as the Dragon King.

Serve Shao Kahn and conquer all the realms in their emperor's name (failed).

The Kahn Guards were an army of ruthless human-looking soldiers from Outworld that served Shao Kahn the Konqueror only and they primarily comprised his own evil empire and his Extermination Squads and they donned skull-like masks which are designed just like their Emperor with his iconic helmet-like crown. This vicious military legion was formed after the death of Outworld's first leader known as Onaga the Dragon King.

Reiko while still a high ranking member of the Brotherhood of Shadow which worshiped the fallen Elder God Shinnok, was originally among those same soldiers and was notorious for his fighting skills and his ruthlessness. Shao Kahn likes that in his soldiers, he sees such ruthlessness in Reiko and even promoted him as a general of his army. Each of the Extermination Squads which are formed entirely by the Kahn Guards, were trained to not only exterminate Shao Kahn's enemies that opposes him, but also, as warned by the citizens of Outworld, to eliminate every would-be rulers and usurpers before they could rise to power.

These war-like soldiers invaded, attacked and conquered other realms including Edenia, Vaeternus, and Zaterra under orders from their mighty Emperor Shao Kahn himself for millennia.

The ruthless Kahn Guards and their emperor were later stopped by the god of thunder Raiden and his chosen defenders of Earthrealm when they first invaded their homeworld.

The Kahn Guards appeared in Rain's Mortal Kombat (2011) ending alongside the Tormentor monsters as well as the Shokan laying siege to Earthrealm after comfirmation of the Edenian "prince"'s divinity as the lost son of the god Argus.

Executioners are a vicious faction in Mortal Kombat 2011. They can be seen in the game's cut scenes and the background of certain arenas. The head Executioner wears a black mask to represent his authority. Everyone else wears black bands around their eyes. All of the executioners have open stomachs.

The Executioners' main role is to end the lives of victims through slow and painful death. One method involves lowering a victim into a pool of green acid until the body completely dissolves. They will sometimes extend a victim's fate. This can include tying a victim to a pole and waiting for the execution to begin.

They can also fight. All of them are able to wield cudgels. Despite their ability, they are not very skilled. The leader seems to be very inept as he lost during the first round in a fight.

When not killing victims or fighting opponents, the executioners like to gamble. They play a game where eight-sided dice is thrown onto the ground. Scoring is determined by the amount of numbers shown on the dice. Their bets are never revealed.

Executioners live only in Outworld. They follow orders directly from Emperor Shao Kahn and Sheeva.

During Kahn's invasion of Earthrealm, countless pterodactyls are brought and unleashed upon a city. Many of the citizens are terrorized and/or killed by the winged creatures. Kurtis Stryker and a police force struggle to stop the pterodactyls. They disappear, along with other monsters, after Shao Kahn's defeat.

Appearance in other media

The Kahn Guards appeared throughout the entire film Mortal Kombat: Annihilation including the beginning, but without their iconic skull masks and as all black-clad ninjas, sometimes armored & still carried savage weapons and banners of their master's empire. The Kahn Guards first arrived when their legions (also called Extermination Squads) came from Outworld through the portals and began attacking Earthrealm in order to conquer it for their master Shao Kahn who has broken the sacred rules of Mortal Kombat in his plot to claim Earthrealm, but his entire army were ultimately stopped and the merging of the realms was halted by Raiden and his warriors.

The Kahn Guards later reappeared alongside the Shadow Priests in the television series Mortal Kombat: Conquest and they still serve their emperor Shao Kahn. General Reiko who leads the Kahn Guards into battle, is second in power only to Shao Kahn. In the beginning of the series, the Kahn Guards were also present at the battle between the sorcerer Shang Tsung representing Outworld and the Great Kung Lao, a warrior representing Earthrealm within the throne room of Shao Kahn's Palace.

The Kahn Guards made another appearance in Mortal Kombat: Defenders of the Realm, still under the command of Shao Kahn and these fanatic masked soldiers are aided by the cyborgs that are programmed to serve their master. In the episode "Sting of the Scorpion", skeletial undead warriors bearing the peticular armor of Shao Kahn's soldiers, were in fact, These Kahn Guards, men from Outworld with blind loyalty to the Konqueror died long ago before they were revived and controlled by the ninja spectre Scorpion before he was defeated by both Liu Kang and Sub-Zero, and these dead Kahn Guards along with other undead corpses resurrected by Scorpion were no more. 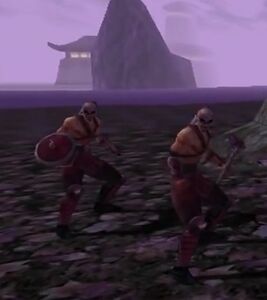 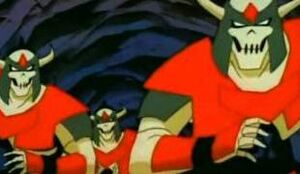 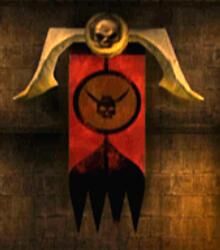 The symbolic banner of the Kahn Guard, Shao Kahn's own royal empire. 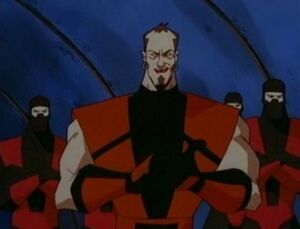 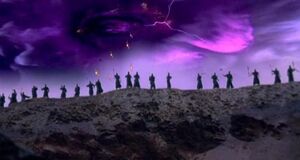 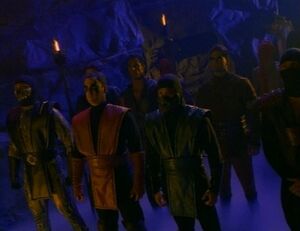 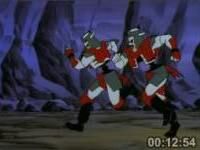 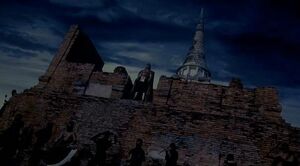 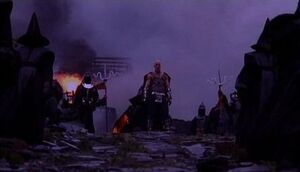 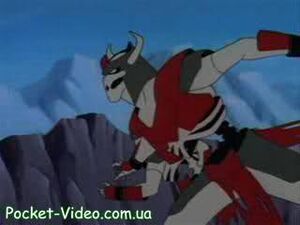 The Executioner from Mortal Kombat: Armageddon. 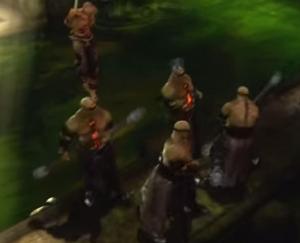 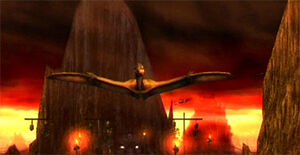