Interrogate Bates into learning what happened on Eden Prime for Cerberus (succeeded).

Leng is a Cerberus assassin and a former Lieutenant and N7 operative of the Alliance military, as well as an archenemy of Shepard. Like the vast majority of Cerberus, he is incredibly racist towards aliens.

He is voiced by Troy Baker, who also voices Joel, Schneizel el Britannia and Pagan Min.

While little is known about Kai Leng's early life, Alliance records show that he enlisted into the Alliance military on November 14th, 2172 at the age of 16, although his credentials were faked at the time. Leng's prowess in combat and xenophobic nature brought the attention of the Illusive Man, and Cerberus helped liberate Leng from prison after he was incarcerated for murder. Leng subsequently joined the organization and soon became one of the Illusive Man's best agents, working as an infiltrator and assassin for over a decade, as well as realizing that Leng is not only ruthless but discreet and methodical. He received cybernetic modifications in terms of Phantom-class implants.

Kai Leng worked with agent Rasa on a job that entailed subverting a Shadow Broker agent for Cerberus. Leng contacted Rasa through video communications in lieu of the Illusive Man, and informed her of a complication to Cerberus' plans. A bounty hunter named Urdnot Wrex has been hired to take out Rasa's target Fist, and the agent assured him she can handle it. Leng held little confidence in Rasa's plans, claiming that if he took care of someone they stay "taken care" of, and Rasa countered that it's precisely the reason she was on the mission, not him.

Repeatedly asking Rasa how she's going to deal with the complication, Leng then commend her Fist was on the move and with guards, making Rasa realize Leng had been shadowing Fist from afar. Rasa was annoyed at Leng's intrusion, but the assassin countered that there were few opportunities to turn someone working for the Shadow Broker. Leng was there for backup, and Rasa made her resentment at his involvement clear.

An explosion near Fist's residence grabbed both Leng's and Rasa's attention, and the assassin began to get impressed with Rasa's scheming. Rasa unexpectedly cursed and Leng remarked it's not the reaction he was expecting, though Rasa clarified it's because of the discovery from Fist's files: he was bought off by Saren Arterius.

Leng warned her there's no time left when Rasa decided to ask Fist for details herself, but Fist arrived earlier than she expected, sending her hiding. Rasa admonished Leng for not telling her Fist was already in the building, and Leng smugly reminded her that she said she could handle it.

A day after Saren Arterius' attack on Eden Prime, Leng captured and interrogated a runaway Alliance soldier regarding what caused the attack. As soon as he was done, he contacted Rasa, who was on the Citadel. The traitorous captive produced nothing they didn't know, and without other leads, Leng brainstorms with Rasa for ideas.

Comparing Leng's findings with hers, Rasa noted that a female Alliance soldier named Gunnery Chief Ashley Williams was involved in the fighting. Leng assumed that Williams was killed-in-action along with the rest of her squad, only for Rasa to inform him that Williams was alive and on the Citadel. She then asked him what he intended to do with his captive, and Leng answered that he was going to dispose of him. He also warned Rasa to be cautious in interviewing Williams.

At the end of the interview, Rasa informed Leng that geth attacked the colony, though Captain David Anderson failed to report that. Apparently, Saren and the geth were after a Prothean Beacon, which came into contact with Commander Shepard. Leng stated that he will report back to the Illusive Man and advised that Rasa do so as well. Rasa insisted that she stay a little while longer to find what happened to Shepard and the beacon, but Leng refused her request.

Leng visited Rasa in her quarters when the agent failed to appear for her debrief. While Rasa resented his presence as usual, he took a glance at the dossiers the woman had been researching for the Illusive Man, and listened to her grumble about wasted time on Shepard's SSV Normandy companions. Rasa reasoned Cerberus should've focused more on learning about the Commander, not on people with issues, and Leng replied she could've told the Illusive Man so if she hadn't missed the debrief. Leng added he wouldn't recommend it, however, and before leaving reminded her not to miss the next debrief.

The assassin chanced upon Rasa concluding her discussion with the Illusive Man and inquired about her new orders. She was told to stay put for the moment and he brought up the subject of Shepard's demise, callously opining everyone's got to die sometime. He figured that if the Commander wasn't strong enough then maybe someone else should take the lead for humanity. Rasa asked if Leng thought he was the one, though he dismissed the idea for the moment as he had a mission to attend to.

It wasn't about the investigation into Shepard's death, as he told Rasa when she asked. Leng got touchy when Rasa determined he was as dark on the matter as she was, bragging about his seniority over her in terms of years in the group. Rasa was uninterested and wondered out loud who the people assigned to Shepard's case were, assuming they must be important enough to replace Leng, though Leng rhetorically questioned who could ever do such a thing.

Kai Leng met up with Rasa and informed her of a mission she was to take with him. Still disliking their forced partnership, Leng filled her in on the details. Someone blew up a Cerberus training facility, and the Illusive Man dispatched them to catch the perpetrator. Leng declared he won't be taking any chances with the job, and told Rasa she's only there to piece together things when he's done.

Leng listened to Rasa prattle on about her thoughts on the target's nature once they were at the training facility. He surmised that the Blue Suns contingent also in the base must be there for containment in case of the agents' failure, and with Rasa's suspicions in mind he urged her to keep up the pace. They must find Jack before the mercenaries do.

Rasa and Leng found Jack after she finished dealing with some Blue Suns mercenaries. Leng issued threats against the biotic, waving his sword, only to be knocked over by Jack's immense biotic energy. He tried another tactic and came at Jack from above and behind, but she sensed his presence and threw him off farther away.

By the time Leng recovered, Jack was already taken unconscious by the mercenaries. He remarked the Illusive Man won't be happy with the developments as he pried his stuck sword loose, and declared the whole fiasco to be a colossal waste of time.

Leng rounded on Rasa in the aftermath of their failed mission to capture Jack. He claimed the Illusive Man wasn't done with them yet: if they're lucky they'll have new assignments waiting when they got back. Rasa tried to reason with him aboard their shuttle, but Leng just blamed her presence for Jack's absence and even accused her of gloating at the beating he received from the biotic. Message beeps interrupted their exchange, and Leng grumbled that Cerberus didn't even wait for them to land.

He later received orders to return to the shuttle mere moments after their landing at the Minuteman Station, with Miranda Lawson claiming that the Illusive Man wanted to see him in person immediately. Rasa tried to apologize, but Leng threatened her instead: assuming he got another chance, she better hope they never go on missions together ever again. Not one to keep the Illusive Man waiting, he hurried along his assigned driver as he went back inside the shuttle.

Kai Leng is sent to capture a former member of Cerberus called Paul Grayson and later murders him when Reaper tech indoctrinates him and makes him too dangerous to live.

In Deception, Leng is tasked by the Illusive Man with retrieving Paul Grayson's body from the Citadel and monitoring the activities of David Edward Anderson and his colleague, Kahlee Sanders.

He is among the Cerberus forces attacking the Citadel during the attempted coup. He encounters Commander Shepard whilst attempting to assassinate the salarian councilor, but is stopped by Thane Krios or Major Kirrahe; if neither are alive at this point, Leng succeeds in his assassination. He pursues the rest of the Council, who are being lead into a trap by the traitorous Councillor Udina. However, when Shepard makes it to the councilors ahead of him, Leng decides that the coup has failed and abandons Udina, who is subsequently killed either by Shepard or the Virmire survivor. He reports the failure to the Illusive Man, who writes Udina off as "expendable" and orders him to return to be briefed regarding the other plans he has set in motion.

Leng next appears on Thessia where he takes the Prothean VI containing data on the Catalyst from Shepard. Following the mission, Shepard receives a message from Asari Military Command regarding the evacuation of Thessia; upon opening the message, it is revealed to have actually been sent by Leng, who taunts the commander over their failure to stop him.

Specialist Samantha Traynor manages to trace Leng to Sanctuary, a refugee center on Horizon, which turns out to be a Cerberus facility used to study Reaper indoctrination. The Illusive Man had ordered Leng to Sanctuary in order to retrieve the research data from the facility, but by the time Shepard arrives, he has already left. During his mission, Leng encounters Miranda Lawson, who is at Sanctuary to rescue her sister Oriana from their father Henry, who is the head of operations at the facility. Depending on how Shepard handled their interactions with Miranda, she will either succumb to her injuries from her encounter with Leng, or survive. Regardless of her fate, she manages to plant a tracking device on Leng without his knowledge, giving Shepard the location of the Illusive Man's headquarters, Cronos Station.

Leng makes his final appearance at Cronos Station, where he faced off Shepard and the squad in the Illusive Man's office during the Alliance Navy's assault. Leng is defeated and killed by Shepard and the VI is recovered. Shepard can either dedicate the kill to whoever dies by Leng's hand during the game or deliver a taunt on Leng over his gloating victory on Thessia. 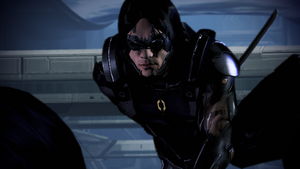