Villains Wiki
Register
Don't have an account?
Sign In
Advertisement
in: Spoilers, Mature, Kimetsu No Yaiba Villains,
and 53 more

Member of the Twelve Kizuki

Become the Thunder Pillar of the Demon Slayer Corps (abandoned).

Kaigaku (獪岳，かいがく) is a minor antagonist in the Demon Slayer: Kimetsu no Yaiba manga and anime. He was a member of the Twelve Kizuki, holding the position of Upper Rank Six after the deaths of Daki and Gyutaro. He serves as a supporting antagonist in the Infinity Castle Arc.

He was originally a Demon Hunter and member of the Demon Killing Corps as well as Zenitsu Agatsuma's senior student when they were being taught by Jigoro Kuwajima. After his treachery, Kaigaku later becomes Zenitsu's archenemy. His cowardice would later lead him to his downfall when Zenitsu overcomes his insecurities as Kaigaku mocks Jigoro. Kaigaku's Thunder Breathing training would lead to his Blood Demon Arts being related to lightning.

He is voiced by Yoshimasa Hosoya in the Japanese version of the anime and by Alejandro Saab in the English version, the former of which also voiced Wave from Akame Ga Kill! and Reiner Braun from Attack on Titan.

Although diligent, Kaigaku is an arrogant opportunist who follows strong and despises the weakness, especially when it obstructs something he wants, as seen with his bullying words against Zenitsu.

Deep down, Kaigaku is also a coward, who cowered in fear at Kokushibou and knelt in front of him, willingly accepting Muzan Kibutsuji's blood and became a demon as a result. Kaigaku also shows no remorse for his own treachery and cowardice, even teasing his master, Jigoro Kuwajima, as a worthless weakling just like Zenitsu after discovering the latter committed suicide out of shame.

Kaigaku was an orphan and a thief, who had to eat scraps and steal to survive. This established a certain belief in his head, he started to believe that strength was the only thing worth respecting, and those who can‘t see true strength or are too weak aren’t worth respect.

When he was a child, Kaigaku was one of the orphans Gyomei Himejima cared for at his temple, and had rely on theft and eating scrap to survive. However, he had developed a self-serving view upon survival. After he was caught by the other children for stealing temple money, he was chased out at night. After that, Kaigaku encountered a Demon, which he then let into the temple in exchange for having his life spared, in order to seek revenge against Gyomei and other children. It eventually caused Gyomei to be wronged and sent into prison, until he had been rescued and joined the Demon Slayer Corps.

After acknowledging the Demons' existence, Kaigaku decided to become a Demon Slayer in order to become strong. During his career as a Demon Slayer, Kaigaku was taken in by Jigoro Kuwajima, the Thunder Pillar, along with Zenitsu, and taught the Breath of Thunder style. Kaigaku became determined to become Jigoro Kuwajima’s successor and the new Thunder Pillar. However, Kuwajima revealed that Zenitsu would become his successor, since Zenitsu had potential to master the First Form of Thunder Breathing, while Kaigaku had never mastered it even after mastering the other Forms from the Second to the Sixth.

Later on, Kaigaku went on a solo mission to hunt down Kokushibou, the Upper Moon One, but was overpowered. After the defeat, Kaigaku kneeled before Kokushibo and begged for his life. Kokushibo offered Muzan's blood to turn Kaigaku into a demon, which Kaikagu accepted, causing his transformation into a man-eating savage. After finding out that his student betrayed him and renounced humanity, Kuwajima committed seppuku out of shame.

After the deaths of Daki and Gyutaro, Kaigaku was promoted to become Upper Moon Six of the Twelve Demon Moons due to his power and confronted Zenitsu as a rematch he always desired. Zenitsu revealed his master's demise to his teacher's classmate, accusing Kaigaku for the one to blame, but Kaigaku nonchalantly disagreed with his former classmate, believing that those who praise him were good and those who don't were evil. To make matters worse, Kaigaku didn't care about his master's death for ignoring him. Disgusted, Zenitsu called Kaigaku a piece of trash who can never master Thunder Breathing - First Form, and decided to part ways with his former prefect.

Since Kaikagu had yet to master his Demon Skills fully, Zenitsu ultimately won the duel with his newest technique, Thunder Breathing: Seventh Form: Flaming Thunder God. Kaigaku mockingly commented that their master does favor Zenitsu more for teaching him that style, until Zenitsu revealed that Flaming Thunder God was his own making, in order to fight alongside Kaigaku as equals.

Hearing this, Kaigaku watched in shock and anger as his old classmate was saved by Yushiro. Eventually, Kaigaku's head screamed in anger as he disintegrated. Yushiro scornfully declared that Kaigaku will be given nothing since he never learned how to give, and Kaigaku's die-alone fate was sealed once he decided to let his desire inflate and take him over.

Kaigaku was taught by a former Hashira, Jigorō Kuwajima in the usage of this Breathing Style and immediately stuck out as a natural prodigy due to having mastered it easily. But despite his natural talent, Kaigaku was was unable to learn the first form of the Breathing Style despite learning the other styles of the Thunder Breathing. 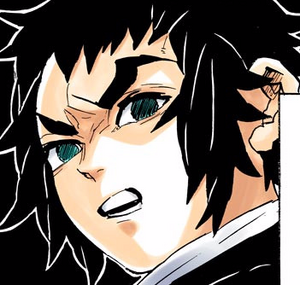 Kaigaku (as a human) in the manga. 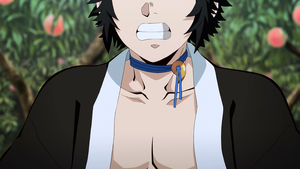 Kaigaku (as a human) in the anime. 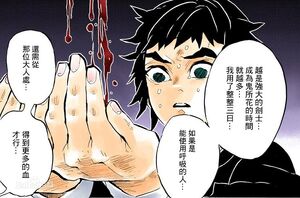 Kaigaku surrenders himself to Kokushibou upon losing to him. 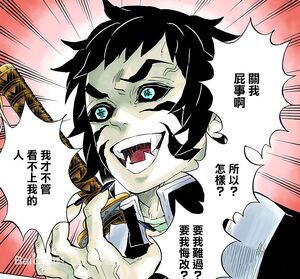 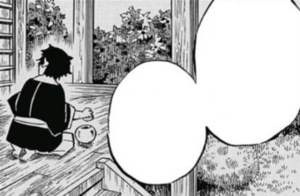 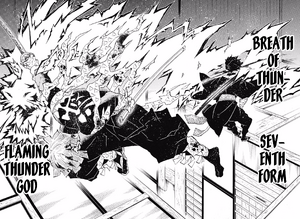