Rule and later restore Nosgoth, destroy its manipulators and bring about the return of the vampires.

He was voiced by Simon Templeman in all of his appearances.

Kain is initially introduced in Blood Omen as a human who's killed by a band of brigands. Upon his resurrection, Kain becomes a vampire and, initially seeking revenge on his killers, is eventually entangled on a plot to defeat the Circle of Nine, the corrupted guardians of the land, while seeking for a cure for his vampiric curse. As the game progresses, however, Kain starts to embrace his vampirism, eventually coming to terms with his current existence upon learning of his role as the last member of the Circle and shifting his goals into becoming ruler of the now corrupted land of Nosgoth. In this game Kain is seen as a middle-aged man, with pale skin and wearing a black set of armour and red leather.

In Blood Omen 2, Kain is once again set on revenge, this time against the Hylden Lord, while seeking to regain his rule upon Nosgoth. His appearance is mostly similar to the first game, initially wearing less armor with his torso exposed before changing into a hooded robe and a golden set of armor with spiked shoulders by the end of the game. In the two Soul Reaver titles and Defiance Kain is seen with a more mutated appearance, with three-fingered claws in place of his hands and pointed protusions on his face. Having spent millenia uncovering the secrets of Nosgoth and his own existence, Kain has shifted his motivations towards restoring Nosgoth and destroy those who would manipulate him to further their own agendas or prevent him from fulfilling his role as the Scion of Balance.

The character of Kain grew significantly throughout the games. He is initially seen as a petty nobleman who blindly seeks revenge for his death, showing cynism and a misanthropic disdain for humanity, with little to no concern for the fate of both Nosgoth and those who lived there, something which allowed him to easily become a unwilling pawn for the machinations of both Moebius and the Hylden Lord. After embracing his vampiric powers Kain begins to lust for power, while striving to escape other's manipulations and forging his own destiny.

On subsequent games Kain, feeling the weight of his actions and of his destined role, becomes a more fatalist and cunning individual, though he values loyalty and sincerity above all else, despising traitors and cowards. Though he realizes his ultimate goal of restoring Nosgoth may be beyond his reach, he still takes careful steps to ensure his plans will go smoothly and as to not fall into traps laid by others. Despite his often violent temperament, he shows true compassion for his sons and those loyal to him.

Kain has demonstrated a vast array of abilities throughout the series, both related and unrelated to his vampiric state. In the first game Kain is capable of shapeshifting, being able to turn into a swarm of bats for fast travel, a wolf form which allowed him to jump high ledges and move faster, a mist form which renders him invulnerable and allows him to phase through obstacles, and a human disguise. Later games would only retain the bat swarm and mist transformations.

In Blood Omen Kain is capable of using various form of magic, which include shooting homing bolts, creating a protective barrier around himself, instantly removing his opponent's souls from their bodies and even raining down lightning. Most of these abilities are dropped in subsequent games, however. In Blood Omen 2 Kain gains most of the abilities he would carry on into the Soul Reaver and Defiance games, like leaping high distances, gliding, telekinesis and mental manipulation.

Besides his magical and vampiric abilities, Kain is also a skilled fighter and swordsman. His original weapon is a regular iron sword, which is later upgraded into a flaming sword, though he can also use other weapons such as a spiked mace and a pair of axes. His final weapon is the Soul Reaver, which would become his signature weapon, a powerful living sword with a sinusoidal blade which feeds on the souls of those killed by it. In Blood Omen 2 Kain temporarily loses the sword, relying on his claws and various pickup weapons before recovering it. 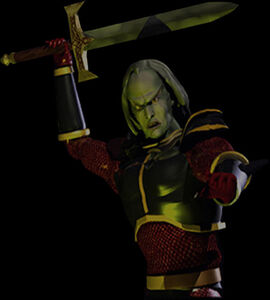 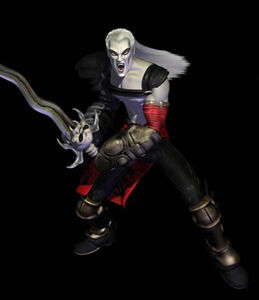 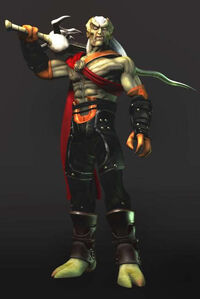 Kain in Legacy of Kain: Defiance. 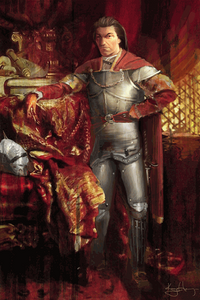 Kain's human appearance, as it appears in a mural on Soul Reaver 2. 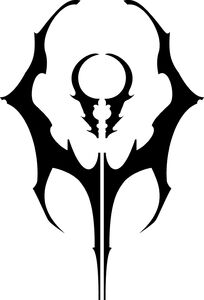 Kain's sigil.
Add a photo to this gallery 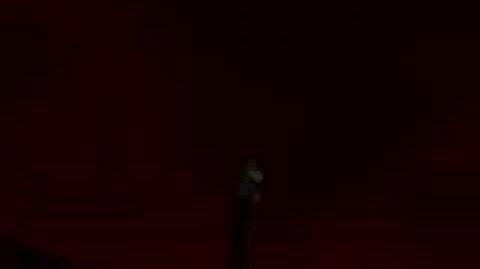 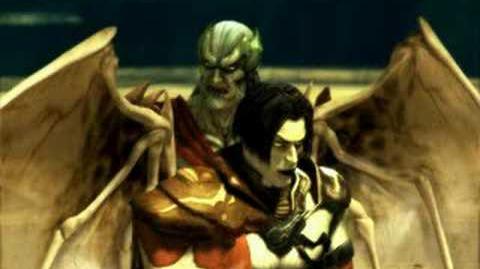 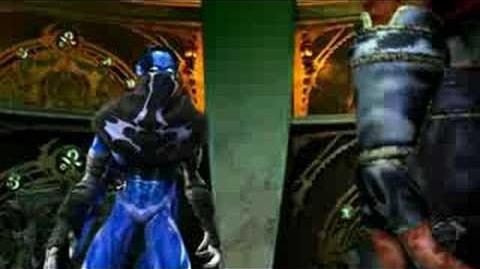 Retrieved from "https://villains.fandom.com/wiki/Kain_(Legacy_of_Kain)?oldid=3368651"
Community content is available under CC-BY-SA unless otherwise noted.