Make a state of constant oppression.

Kain R. Heinlein is the main antagonist and final boss of Garou: Mark of the Wolves.

Kain is the brother of Marie Heinlein, who got married with Geese Howard. While his sister lived in luxury, Kain faced poverty in the slums of Southtown, being watched over by his friend Abel Cameron. One day, Kain witnessed a child being brutally murdered in the streets, deciding from this point on to seek power to rule the city. After beating up a person in the street, Kain was spotted by a wealthy kingpin and adopted into his family, but within time Kain overthrew him and became the leader of his gang.

Kain heard news that his sister died of sadness, since she was neglected by her husband, but shortly after Geese was killed by Terry Bogard, who adopted Geese and Marie's son Rock. Upon watching the denizen's everyday life Kain got disgusted by the mediocrity of people, deciding to take upon Geese's legacy and become the ruler of Second Southtown. As he believed people only learn to value their lives when they are oppressed, he sought to turn Second Southtown into a city-state independent from USA. Also seeking for Rock to join him, Kain hosted the King of Fighters Maximum Mayhem tournament to attract Rock.

Kain's exact fate is unknown, as each ending depicts a different outcome. On Terry and Rock's ending Kain convinces Rock to join him, telling Rock that his mother is actually alive. The other character's endings show Kain's mansion crumbling behind him, after which Kain is nowhere to be seen. On Gato's ending Kain tells Gato to finish him off, but he is suddenly rescued by a mysterious person, whom Gato seems to recognize. 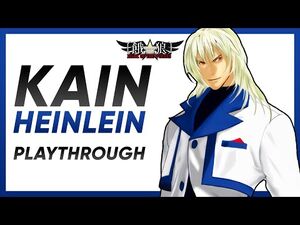