Live up to the heroic legacy of Spider-Man (Ongoing)

Kaine, now known as Kaine Parker, is a former supervillain turned hero and ally from Marvel Comics. He is the first clone of Spider-Man created by the mad scientist, the Jackal. First thought as a success, Kaine eventually became deformed and degenerate as he slowly dead and was left mentally unstable due to a flaw in the cloning process. He would become the arch nemesis of the original Scarlet Spider and later an opponent to Spider-Man. After helping stopped the Jackal and Spider Queen during the events of Spider-Island, Kaine became a local vigilante during his stay in Houston, Texas as he eventually became a reluctant superhero while trying to make amends for his past.

Kaine is the name of Spider-Man's clone created by Professor Miles Warren aka the Jackal in an attempt to frame him for crimes, however things didn't go according to plan and he began to degenerate so he throws him out, he feels rejected, some time after his creation he figures that he has all of Spider-Man's powers and more one of which is glimpses into the future and one he calls "The Mark of Kaine" in which he burns away hand prints on his victim's faces, after a time he begins stalking Ben Reilly a perfect clone of Spider-Man and believes he is the real thing because the Green Goblin told him so and also because he thinks he's his father's favorite. Some time later he falls in love with and dates a female police officer named Louise Kennedy, he later finds out she's working for criminals and he kills her and frames Ben Reilly for the murder because they had identical fingerprints

One day he has a vision of Mary Jane being murdered by an unknown villain (he loves her because he has Peter Parker's memories) so he decides to prevent this from happening, he hunts down and murders several villains including Doctor Octopus and the Grim Hunter. Several surviving villains go into hiding because they believe Spider-Man has gone mad, and Mysterio forms together the Sinister Seven to defend against Kaine. Kaine also kidnaps Reilly's girlfriend Elizabeth Tyne and seemingly kills her in order to torment him.

Eventually Peter Parker is arrested for the murders because he Kaine and Riley have identical fingerprints and they are clones of him, Reilly switches places with Parker because they are in good terms and look enough alike, Parker is captured by his rouges gallery and a mock trial is arranged, during the trial Kaine goes mad and admits he is behind the murders he and Spider-Man fight and he has him arrested, of course he doesn't stay in jail long and went after Relly. Some time later they encounter his creator The Jackal and his latest clone Spidercide and do battle with them Spidercide impales Kaine with a spike and he falls from the building seemingly to his death.

He is later revealed to have survived by climbing inside one of Jackal's regeneration pods, he later reveals that Elizabeth isn't dead but he had her flee the country and she reunites with Reilly, Kaine chooses this time to attack he eventually beats him unconscious in a flaming building he tells him that neither of them deserves to live and that Elizabeth will die with them, Ben tells him to spare her because she's innocent, he then decides to spare them and tries to kill himself by police fire but Ben stops him he then decides to make peace with him and turn himself in to the police.

He spent some time in prison until it was destroyed and he fled the scene, he later learned that Ben Reilly the man who had come to accept him as his brother was dead the Green Goblin had murdered him so he became dedicated into hunting him down, he also learned that Peter and Mary Jane's daughter was alive so he attempted to save her, he killed many Scriers to retrieve a parcel which he thought contained baby May but didn't, he was later captured by Norman Osborn (The Green Goblin) and imprisoned.

He did not resurface until years later where it revealed at some point he encountered Kraven the Hunter, killed his butler, and buried Kraven alive whom later dug himself out three days later, he is later seen hunting down Raptor because he had told him he would cure his degeneration, Raptor reveals that he lied about curing him and in response Kaine kills him, he is later attacked by Kraven's family in revenge for what he did earlier barely escaping with his life he later teams up with Spider-Man in order to defeat them, they are separated and Kaine is captured and beaten within an inch of his life, he is then killed as a sacrifice to resurrect the original Kraven, after the events Spider-Man buries him and marks his grave with "Kaine Parker", he later rises from his grave having mutated with extra appendages. 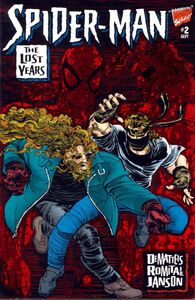 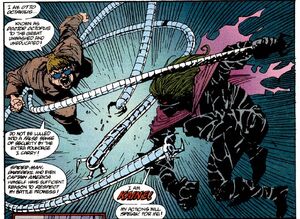 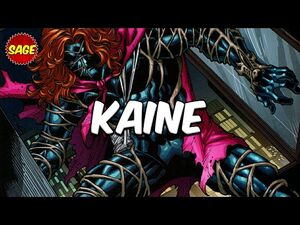 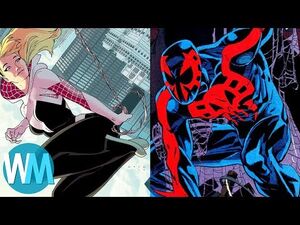