Villains Wiki
Register
Don't have an account?
Sign In
Advertisement
in: Mature, Tyrants, Fist of the North Star Villains,
and 49 more

Creator of the New Century

Exterminate Hokuto Soke along with Hokuto Shinken to pave the way for the era of Hokuto Ryuken.

Years ago, Kaioh once trained with his little brother, Raoh and didn't wish to die for a cause he didn't believe in. Suddenly, when a palace caught fire, the two brothers found their mother cradling their unconscious brother Toki in her arms. She soaked herself with water and sacrificed herself to save the infant Hyo and Kenshiro. At the funeral ceremony, Kaioh melted down as the ceremony could not bring his mother back. After the two buried their mother at Lake Masho, Kaioh decided to give up on love, and evil began to fill his mind. He killed his dog, Ryu, as the first step in his path to power.

In the years that followed, Kaioh began to win against many sparring opponents with Jukei thinking of his student's strength, only for Kaioh to walk out on the other students. For the sparring matches against Hyo, Kaioh was ordered by Jukei to throw the fight just to encourage him. From that point on, the students of Jukei began to sham Kaioh. He eventually wiped Hyo's memories of his brother, Kenshiro. Over time, Kaioh eventually began to rule the country of Asura with an iron fist. When he encountered his brother, Kaioh learned that when he conquered the world, the Land of Asura would be next.

In the present, Kaioh is first seen riding his horse, glowing with matoki and scaring a few Asuran soldiers. Kaioh then kidnaps Lin who is being sheltered by Leia and Tao. He then shows to his prisoner all the horror and pain he's had to endure. Kaioh also tells Lin of the Hokuto Shinken successor being the messiah who would liberate Asura. When Kenshiro arrives, Kaioh gladly greets him.

Kaioh then engages Kenshiro declaring that Hokuto Ryuken would bring about the new age. He first begins with the Anryu Hiha beam attack. Kaioh then gets his first glimpse of the Musou Tensei and at first seemed to be in trouble, until he uses his power to spot the Hokuto Shinken master. Kaioh then gloats about how Kenshiro can't truly be the messiah of Asura. Despite Kenshiro's efforts, he can't lay a single blow to the dictator and loses heavily to Kaioh. The Rashō then brings Kenshiro outside, tied to a cross resembling the Big Dipper.

With the Big Dipper shining, Kaioh then begins to administer Kenshiro's execution, striking him with powerful blasts until Shachi comes to the rescue. Then, the pirate Akashachi arrives with his crew to fight the Asuran forces. The pirate's equipment such as sulfuric acid and spears seemed effective, until Kaioh shot a bow gun into the pirate captain. The Hokuto Ryuken master then began slaughtering the pirates while Shachi carries Kenshiro away.

Kaioh then tries to stop Shachi from escaping and seems to hold the advantage showing his disgust for justice, faith and loyalty. Just then, the comatose Kenshiro seemingly stands and shows an image of himself that knocks the villain down. As his enemies flee, Kaioh vows to exterminate all of Hokuto Shinken.

After his matoki subsides, he learns Hyo is riding to the castle to meet Sayaka. Kaioh then kills his sister to turn Hyo into a bloodthirsty-demon bent of killing his brother. The Rashō then lies to Hyo that Kenshiro had killed Sayaka. Kaioh really intends to let the brothers kill each other, so there would be no one to stand in his way.

Kaioh then reveals his face to Lin as it is similar to Raoh's except with scars. He then tells her he really hated Raoh because of his emotions. If the world found out about the heritage, Raoh's Legend would crumble. He then announces to Lin he would give him a child. If she did not comply, then Lin would have to commit suicide, but is then informed that Hyo's memories are restored, melting Kaioh down further.

Kaioh then follows Shachi to the Taisenden to stop him from learning the secret that would put him down. Upon knocking his enemy down, they find themselves in a chamber with a statue of a goddess. Touching the statue made Kaioh hurt himself and he blasts at it, but Shachi gets up empowered by the statue. As Shachi continues to pummel Kaioh, the Rashō then says love would be poison to his ears. As soon as Kaioh begins to dominate, he learns Shachi was being possessed by the spirit of Hokuto.

He then confronts Kenshiro at Lake Masho with Lin at his side. Before the fight begins, Kaioh hits the Shikanhaku pressure point on Lin to knock her out. He points out when she wakes up, she'll fall in love with the first person she sees regardless if they are good or bad. Kenshiro reveals his strength has been increased from the Hokuto seal, thus finally being able to strike Kaioh. The two then clash with their strength now even. Kaioh then reveals all the scars he had given himself. Kenshiro then attack again, with no effect. Kaioh then pierces his fingers into the Hokuot Shinken successor with the latter piercing his own in as well. Kaioh then traps Kenshiro in a small cave that emits gas to hinder him but it won't harm the Hokuto Ryuken user. Just as Kaioh announces victory, the Man with the Seven Scars breaks a knife, cutting the villain badly. He also finds Kenshiro used hair like a needle to let the gas into Kaioh's body forcing him to escape.

Kaioh then shows his Hokuto Soke stance hoping to gain total victory. He then demoralized Kenshiro with the Anryu Tenha and pummels him with the Seimyo Danretsu but Kenshiro survives. He then uses the Kento Shadan to break down the Rashō's defenses. With Kaioh's arms at the point of being crippled, he pleads with his mother to give him the strength for one final strike, but Kenshiro lands a final punch and defeats him.

The defeated Rashō then knew if he had Hokuto Shinken, he would've been the victor but realized he would still lose. He felt his dreams were all just a dream. an agonizing Hyo then comes to encounter him and Kenshiro, Kaioh expecting Hyo's desire for revenge prepares himself for the final blow, but is shocked to see that instead Hyou cried in tears for forgiveness, blaming himself for not being strong enough to prevent Kaioh to become evil, this breaks Kaioh into tears, he then states that he wishes they and Sayaka can meet in heaven and play like normal children, Hyo perishes in the arms of Kaioh who then carries the dead Hyo to where his mother lied and makes the lava erupt. Bidding Kenshiro farewell, he is buried alive in the lava, making a statue of himself and Hyo. 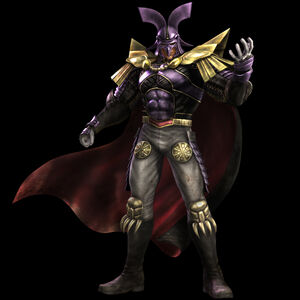 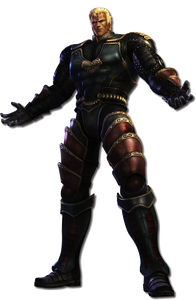 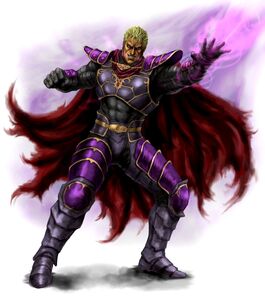 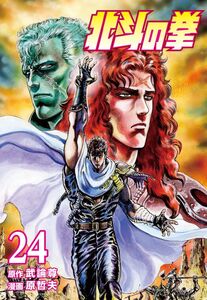