Create a world where the strong do not oppress the weak.

Kaito Kumon is the original leader of Team Baron and the deuteragonist of Kamen Rider Gaim. He possesses a Sengoku Driver which allows him to become Kamen Rider Baron, though he later trades for a Genesis Driver he receives from Ryoma Sengoku.

Throughout the series, Kaito serves as an anti-heroic rival and occasional ally to Kouta Kazuraba, with the two sometimes clashing and at other times assisting each other against a greater threat, such as the Yggdrasill Corporation or Overlord Inves.

In the final arc, however, Kaito eats a fruit of Helheim and transforms into an Overlord Inves known as Lord Baron to accomplish his goal of creating a world where the strong do not oppress the weak, becoming the final antagonist of the Gaim's main story.

He was portrayed by Yutaka Kobayashi.

Kaito was originally the son of a construction worker up until the Yggdrasill Corporation drove his father's company out of business, causing Kaito and his family to become poor and his father to become drunk and abusive towards his family as a result. Both his parents would later commit suicide, and Kaito was placed in an orphanage for the remainder of his childhood. Because of this, he swore to destroy Yggdrasill Corporation.

After Team Gaim's Kouta Kazuraba obtained a Sengoku Driver, Kaito received his own Sengoku Driver along with the Banana Lockseed from Lock Dealer Sid. Along with the Sengoku Driver and Lockseed, Kaito also obtains the Lock Vehicle: Rose Attacker. Kaito later forges an alliance with Hideyasu Jonouchi and Ryoji Hase, the leaders of two other Beat Rider teams and provides them with Lockseeds of his own. However, after Kaito is almost defeated by Gaim and Ryugen Jonouchi and Hase transform into Gridon and Kurokage and betray him. The two new Armored Riders beat him back but Gaim and Ryugen defeat both of them before they can continue fighting.

After the Beat Riders became unpopular in the eyes of Zawame City thanks in part to Oren Pierre Alfonzo blaming them for the Inves attacks, Kaito challenged Oren to a duel. However, after Peko is injured by a falling set piece, Kaito resolves to finish the fight another day so he can take his comrade to safety.

Kaito and Kouta were both taken to Yggdrasill Tower where Kaito met with Yggdrasill's lead scientist Ryoma Sengoku, who explained the truth about the Inves and the Helheim Forest to him. After hearing Kaito's Darwinist ideals, Ryoma invites him to join his secret circle, who were secretly plotting to use the Helheim invasion to seize power.

Kaito later allies with Ryoma Sengoku's sub-faction within Yggdrasill to locate the Red Overlord Inves. Kaito succeeds in tracking him down, but soon finds himself outclassed due to his outdated Sengoku Driver. He is saved by Yoko Minato and later given a Genesis Driver by Ryoma after Yoko convinces him to give Kaito one more chance. He goes to confront Demushu again but is stopped by Kamen Rider Gaim. Mitsuzane as Kamen Rider Zangetsu Shin then sneaks up on Gaim from behind and attacks him. Kaito soon deduces that Zangetsu Shin is Mitsuzane in disguise but is unable to convince Kouta of it. Kaito and the other Armored Riders later face off against Demushu as he is rampaging through Zawame City. Despite outnumbering him they are all beaten back by the Overlord until Kouta arrives with the Kiwami Arms. With his new powers, Kouta destroys Demushu.

Kaito later had his left arm infected from an attack by Redyue while trying to save Kouta and Takatora from an attack by the Overlord Inves. Kaito and the other Beat Riders later form a temporary alliance with Ryoma Sengoku to infiltrate Yggdrasill Tower, which the Overlord Inves were using to store the civilians they kidnapped from Zawame. After freeing the civilians, Kaito is confronted by Mitsuzane Kureshima, who had sided with the Overlord Inves. Kaito fights Mitsuzane for a bit before leaving Oren and Jonouchi to handle Mitsuzane while he goes to assist Kouta in his confrontation with Rosyuo. However, Kaito soon found himself incapacitated as the infection on his arm grew worse. During the confrontation, both Rosyuo and Redyue were killed.

Following the demise of Rosyuo, Kaito and Yoko find that Mai had vanished. The two arrive soon discover Mai's lifeless body and learn that Ryoma had operated on her to extract the Golden Fruit, seemingly killing her in the process. Kaito and Yoko attempt to assume their Rider forms to fight Ryoma and avenge Mai, but Ryoma disables their Genesis Drivers, forcing them to use their Sengoku Drivers instead. Because the Sengoku Drivers are outdated, Ryoma easily manages to beat them down. Forced out of his transformation, Kaito eats a Helheim Fruit and manages to resist its infection, transforming him into the Overlord Inves Lord Baron. With his new powers, Kaito beats down and defeats Ryoma, causing him to commit suicide by throwing himself over a ledge rather than lose to Kaito.

Kaito and Yoko later find Mitsuzane standing over a disappearing Mai. Mitsuzane believes she has died but DJ Sagara appears to tell them she hasn't and that she's only lost in time. Sagara goes on to say that the only way to revive her is by selecting a Man of the Beginning whom she will claim as King. Now seeking to obtain the Forbidden Fruit to remake the world in his own image, Kaito decides to have a final confrontation with Kouta, the only person possible of challenging him for the fruit.

After destroying the drivers of Kamen Riders Bravo and Gridon, Kaito persuades Zack to join forces with him and Marika. However, Zack was only pretending to be swayed and attempts to kill Kaito with a bomb. However, Yoko jumps in the way of the explosive, sacrificing herself to protect Kaito. Kaito then destroys Zack's driver but leaves him alive out of respect for his determination and for being his former friend.

Summoning an army of Inves, Kaito goes to confront Kouta, who is leading his own Inves army, while the citizens of Zawame are evacuated. As their armies clash, Kaito becomes Lord Baron and fights Kouta in a final battle. Kouta ultimately triumphs over Kaito, fatally wounding him by stabbing him with the tip of his sword. As he dies, Kaito compliments Kouta as having found "true strength" before passing away.

Kaito outwardly projects a very cold and aloof demeanor. He is very charismatic, though his harsh adherence to his mindset occasionally costs him allies and is one of the factors that leads to his alliance with the other Beat Rider teams collapsing early on. He also possesses a strong sense of determination, refusing to give up in the face of an adversary more powerful than himself and being so mentally strong he was able to overpower Helheim's effects and become an Over Lord through sheer willpower after consuming a Helheim fruit. Holding a somewhat Darwinist worldview, Kaito sees the world as divided between the strong and the weak and ruthlessly seeks to acquire more power to become one of the strong. Despite his "survival of the fittest" mentality, Kaito seems to lament society being organized the way it is and often encourages others, including his enemies, to obtain more power so they will not be one of the weak. Though he does not show it, Kaito also deeply cares for his teammates on Team Baron, though paradoxically he also expresses the belief that compassion is a weakness.

Despite these beliefs, Kaito despises those who would use their strength to target the weak and innocent, which is one of the reasons why he quickly develops a rivalry with the sadistic Over Lord Demushu. His primary goal in acquiring power is to create a more equal world where the strong do not oppress the weak, though in his pursuit of this goal Kaito is very ruthless, to the point where he was willing to become an Over Lord and amass an army of Inves to conquer the world. This ironically caused his rival Kouta to draw comparisons between him and Demushu.

Kaito enjoys competitions and proving his superiority over others, though he despises cheating especially when it is done by members of his own team, desiring to win competitions fairly without any underhanded tactics. Despite his competitiveness, Kaito is able to accept defeat gracefully. After being defeated in his final battle against Kouta, Kaito accepts Kouta as being the one to claim the mantle of Helheim's chosen and the world he wishes to create. Even when brought back by Megahex, Kaito honors Kouta victory and assists him in fighting against the mechanical invader to preserve the world Kouta fought for. 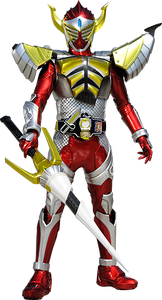 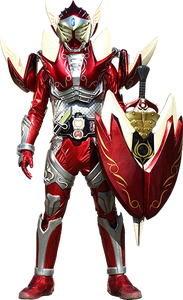