Choking his victims to death and consuming their hearts for himself.
Murdering his own partners the moment he gets angry at them.
Trading insults with Hidan.

Help Hidan kill Asuma (succeeded until he crossed the line).

Help Hidan to kill Naruto and his friends.
Make a lot of money (both failed).

Kakuzu (in Japanese: 角都, Kakuzu) is a rogue ninja from the Village Hidden in the Waterfall who became a member of the Akatsuki, serving as their treasurer, and an antagonist in the manga/anime series Naruto. He steals hearts from his victims in order to remain alive and achieve a near-immortal lifespan. He is motivated by greed and hate, which can both be bought. He serves as one of the two main antagonists in the Akatsuki Suppression arc, along with Hidan.

He was voiced by Takaya Hashi in the Japanese subbed version of the anime, and Fred Tatasciore in the English dubbed version.

Kakuzu is a 91-year-old man, who is very tall (easily standing as the second tallest member of Akatsuki), tan-skinned man with long dark brown hair. His eyes had an unusual coloring: green pupils and red eyes. Noticeably, despite his advanced age, he still appears as a man well within his prime, retaining a very muscular build. Before joining the Akatsuki, he let his hair hang loose, his sweatband covering his forehead, and a black mask covering his lower face (only revealing his eyes), where underneath it his mouth was stitched together at the edges (giving him a Glasgow smile). He wears no shirt (revealing all the stitches on his torso), dark green, ruffed up pants and black shinobi sandals. After joining the Akatsuki, he retained the black mask over his lower face but had several changes. He donned a white hood which covered his hair. His clothing included the traditional Akatsuki cloak, the Takigakure forehead protector with a scratch in the middle which symbolized that he was no longer loyal to it, and grey pants with matching shinobi sandals. He also wore brown nail polish and a dark green Akatsuki ring with the kanji for "north" (北, Hoku) was placed on his left middle finger. The various stitches on his body were the result of the unique technique that he possessed — the Earth Grudge Fear.

After being reincarnated by Kabuto Yakushi and restored by a talisman, Kakuzu gains dark gray sclera but retained his green, pupil-less irides. He no longer wears his forehead protector, hood or mask, causing his hair to be visible as it had been at the time of his death. He also no longer wears his vest, instead of wearing a maroon cloak with white lining, but still wore four masks on his back. In the anime, during the Power arc, Kakuzu wears a black cloak with red lining in place of the cloak he would later wear.

Kakuzu is a possessive, greedy, and materialistic individual, arranging goals in terms of the highest profit he could gain from them, and was often unwilling to involve himself in something if there was nothing to gain from it, as well as claiming that he tended to forget opponents who were not worth any money after he was done with them. He even remarked that money is the only dependable thing in the world. Due to this end, he referred to himself as the "Treasurer of Akatsuki". Given his friendly relationship with Zangei, his bounty officer, it would seem he collected bounties rather frequently to earn cash, and did so (or at least tried) during his missions on several occasions. The frequent side-tasks and devotion to money were both major points of contention between Hidan and Kakuzu. He also seems to respect an opponent who thinks well, as shown with his reaction to Kakashi's counters to Kakuzu's masks, and Shikamaru's quick analysis of Hidan's curse, even mentioning Shikamaru would have been a good bounty in the future.

Out of all of the Akatsuki members, Hidan and Kakuzu displayed the most spiteful animosity towards each other, since neither of them were very fond of each other's interests. The two often traded barbs with one another, Kakuzu's usually having better timing than Hidan's. Hidan had shown great annoyance with Kakuzu's greed and occasional habit of doing or saying blasphemous things, such as attacking a temple and killing the head monk for the bounty on the monk's head. Kakuzu (in turn) dislikes Hidan's religion, believing the rituals associated with it to be a waste of time. Kakuzu is also rather impatient and cantankerous with Hidan's drawn-out speeches and battle style. Despite their mutual dislike of each other, their teamwork is almost flawless, because they complemented each other's abilities extremely well. Kakuzu also seems to care to an extent about Hidan, as he picked up and gave back his partner's forehead protector after he lost it during his fight with Asuma, a feat that made Hidan admit that Kakuzu is not as hostile as he appeared to be, although Kakuzu did note that he only did so because he could not stand the sight of the scar on Hidan's neck.

The only reason that Kakuzu put up with Hidan was that he couldn't get rid of him. Due to his obstreperous temper, Kakuzu often killed anyone close by when enraged, having killed his previous partners and even took their hearts to extend his own life. Therefore, Hidan was the perfect partner for Kakuzu, because of Hidan's inability to die. Kakuzu's somewhat indiscriminate attack style also made Hidan an ideal partner, since Kakuzu didn't need to worry about catching his partner in the crossfire.

Despite his obsessive personality and violent rages, Kakuzu is much more cautious and circumspect than his partner, and is not as arrogant, never mindlessly rushing into battle like Hidan. Kakuzu frequently warned Hidan not to let his guard down and then teased Hidan when he inevitably did. Kakuzu also seemed quite willing to follow orders. When ordered to retreat by the Akatsuki leader, Kakuzu complied immediately (while Hidan attempted to argue), despite the rather large bounty he could have received by taking Asuma. He seemed to forget the greater goals of the organization when enraged, as he attempted to kill Naruto, in spite of Akatsuki's need to capture all the jinchūriki alive.

Kakuzu holds a violent hatred for his village, as, despite his loyalty and willingness to risk life and limb on a dangerous mission, his failure was repaid with uncharacteristically harsh punishment. He responded in kind by brutally betraying Takigakure — committing jailbreak, taking knowledge of their most valuable kinjutsu and killing all of the elders before departing.

Kakuzu has strong steel threads running throughout his body. He can use them to throw people and dig into their organs to capture their heart. He can also harden his body at will and the hearts can separate from his body to form bipedal creatures that can attack his opponents with various elemental techniques. Kakuzu is also biologically immortal and can only be killed if all five of his hearts are destroyed.

Kakuzu originated from Takigakure, the Village Hidden in Waterfalls. He served his village loyally until he failed a mission to assassinate the First Hokage Hashirama Senju. Despite the extreme risk involved in such a mission, Kakuzu was forced to endure painful punishment for his failure. Kakuzu thus began to loathe his village for punishing him for failing to kill an impossible foe, which would eventually lead him to steal the village's forbidden jutsu Earth Grudge Fear and kill the village elders to obtain their hearts, which he consumed using the forbidden jutsu. Kakuzu then became a bounty hunter on the black market and kept himself alive for three generations by harvesting the organs of various ninjas.

At some point, Kakuzu joined Akatsuki and became the organization's treasurer. During his time in the organization he had many partners but killed them due becoming annoyed with them. He was eventually partnered with Hidan, who was also immortal.

Alongside Hidan, Kakuzu captured the Two-Tails Jinchuruuki Yugito Nii, before going to the Land of Fire to obtain the Nine-Tails Jinchuruuki. Along the way, Kakuzu attacked the Fire Temple to collect the bounty on the head monk, Chiriku. He and Hidan slaughtered most of the other monks save one who informed the Konoha ninja of the two Akatsuki. After Kakuzu collecting the bounty on Chiriku, he and Hidan were ambushed by a ninja team led by Asuma and his student Shikamaru Nara. Kakuzu was asked to stay back by Hidan who fought and killed Asuma. Bbefore the duo could kill the other Konoha ninja, they were called to extract the Two-Tails and left.

After sealing the Two-Tails, Kakazu and Hidan were confronted by Team Asama led by Kakashi, who were looking to get revenge. Kakuzu initially overwhelms Team Asama and Kakashi with his multiple hearts and ability to create constructs with the extra ones until Shikamaru tricks Hidan into using some of Kakuzu's blood in his curse ritual, which Kakashi had collected for him when he pierced Kakuzu earlier and destroyed one of his hearts. Naruto then arrives and uses his Rasenshuriken to take out all but one of Kakuzu's hearts. Kakashi then finished him off with a Lightning Cutter. When Kakuzu's corpse was later taken back to Konoha to be autopsied by Tsunade, she learned that Rasenshuriken damaged him at a cellular level.

Kakuzu was later reanimated by Kabuto Yakushi for the Fourth Great Ninja War. He fought the opposing First Division on the shores of the Land of Lighting while harvesting new organs. He is confronted by Team Asuma again after consuming his fifth heart. In the ensuing fight, Kakuzu's arms are sliced off by Izumo and Kotetsu before being bound in their chains.

Kakuzu manages to escape and flee, but the team pursues him. His lightning heart is later destroyed by Tenten using the Bashōsen before he is finally defeated by Choji.

Kakuzu appeared in the chibi spin-off Rock Lee & His Ninja Pals. He is first seen in Episode 38, alongside with his partner Hidan, wherein they arrive at the hideout, telling Deidara and Sasori that art is a waste of time since there is no profit on it. Upon seeing Lee, Kakuzu asks who he is. Before Deidara could say anything, Sasori explains that he is the newbie recruited by Zetsu. Upon hearing this, he told him that he has never seen him before and says that if his name is in the Bingo book, he will hunt him down and then shows his threads from his arm. Upon seeing this, Lee mistook that Kakuzu has long armpit hair, much to his anger. He then began to see that everyone in Akatsuki are all freaks while Kakuzu says that his partner is the biggest freak of all and explains all of his useless ceremonies and rituals, much to the latter's anger. Later, after Deidara unintentionally bombs Sasori in the face, Sasori tries to payback him by summoning his Third Kazekage but accidentally drags him, as well as Konan and Kisame, much to their anger. Kakuzu tries to payback him but accidentally punches Hidan and Pain, thus starting a fight which destroys the entire hideout. Later, upon learning the truth from Tobi, Kakuzu, alongside with the rest of Akatsuki beats up Deidara for not revealing Lee was a spy. In Episode 51, Sasuke teams up with Akatsuki to destroy Konoha. Kakuzu, alongside with Pain and Konan are seen fighting Team Asuma. He is later shown to be defeated. 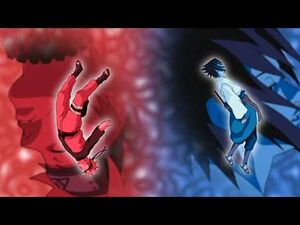