Kalifa is a villainess from the manga and anime series One Piece. She is one of the major antagonists of Water 7 Saga. Kalifa is first seen as Iceburg's secretary. She seemed to be a serious, businesslike woman with a hot temper. She is known for her trademark phrase "That's sexual harassment". She is loyal to Iceburg at first and is always seen walking around with him.

She is voiced by Shelley Calene-Black.

After she revealed her true identity as an agent of the CP9, Kalifa's personality becomes sly, crafty, designing, and manipulative, as she enjoys embarrassing her superior, Spandam by accusing him of harassing her, again with her trademark phrase. Despite her initial impression of being completely serious and professional, she became easily flustered during her fight against Nami. She is not too bright, mistaking Monster Chopper for Nami. She also says that she doesn't need to make her skin smooth with her Devil Fruit power.

During the attack on the tower she fought against Sanji after he came to his senses (he was struck by her looks and they were drinking tea). Sanji almost won against Kalifa but withdrew since he would never strike a woman. She turned him into a soap doll and threw him down the stairs. Nami later arrived to confront her but she had set a bubble trap on the floor, draining Nami's power. Kafila sits in a bubble bath as she looks at the powerless Nami. When Kalifa finishes her bath she starts the fight. In the beginning, Nami cant even damage her, but then she uses hur Clima-Tact to make mirages of herself, and then strike with Thunder Charge. After some more fighting, she is defeated by Nami's Thunder Lance Tempo straight through her chest. Afterward, Nami rips Kalifa's outfit apart till she finds one of the keys to Robin's handcuffs. 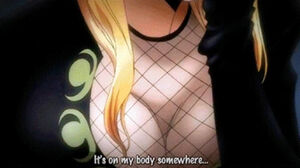 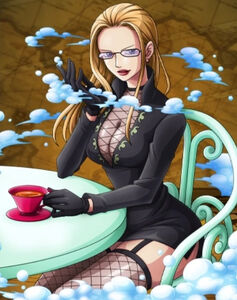 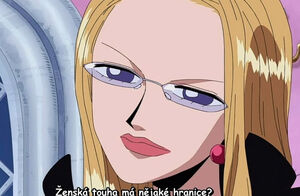 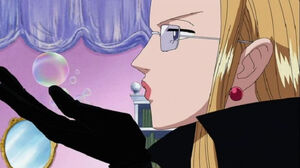 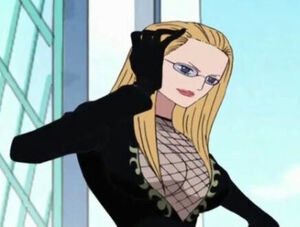 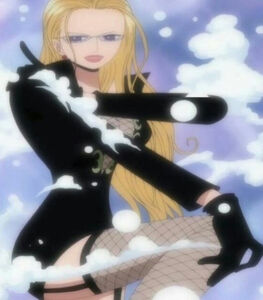 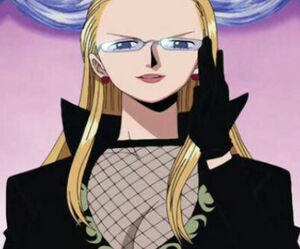 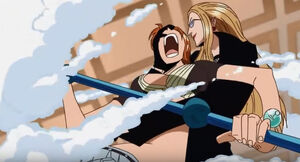 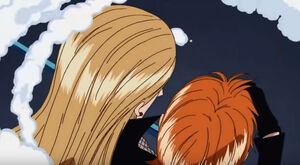 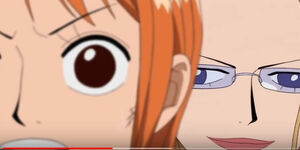 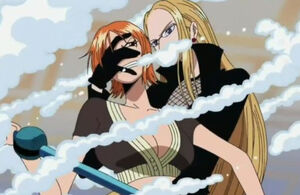 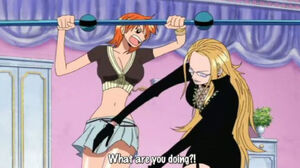 Retrieved from "https://villains.fandom.com/wiki/Kalifa?oldid=3314474"
Community content is available under CC-BY-SA unless otherwise noted.