Help Cyrus in making Arthur sacrifice himself to trigger the machine and open the Ocularis Infernum. (failed; betrayed by Cyrus)

Kalina Oretzia is the secondary antagonist in Thir13en Ghosts. She was a spirit liberator who became Cyrus Kriticos' secret lover and servant. She was killed by her lover for balking at his orders to put Bobby and Kathy, children of his nephew Arthur, in jeopardy.

She was portrayed by Embeth Davidtz.

Kalina was the spirit reclamation business, a form of ghost hunting which one can called ghost protection or ghost protecting, and was engaged to fellow ghost liberator Damon Quinteros, but was having an affair with Cyrus Kriticos. At an unknown point, Cyrus and Kalina discovered the Arcanum and created the Basileus Machine in the form of a mansion from the blueprints in the Arcanum.

With a team of ghost hunters under Cyrus Kriticos' command which included young psychic Dennis Rafkin, Cyrus captured 12 earth-bound souls and had them moved to the basement of the house to become twelve of the thirteen ghosts in the Black Zodiac. Meanwhile, Kalina remained in the spirit reclamation Business to try and get spells needed to activate the machine from Damon.

During the capture of the 12th ghost, in the ensuing chaos, Cyrus and Kalina killed Damon for the tape-recorded Latin chant (needed to cause the captive ghosts to use their life force to power up the machine) and faked Cyrus's death via decapitation.

When Arthur, Cyrus's nephew, inherits the machine disguised as a mansion and moves in with his family, Kalina travels to there with the Arcanum, the stolen spells, explosives and quicksilver flares.

Kalina meets up with Arthur in the house in time to save his daughter, Kathy from The Jackal and escape with them, Dennis Rafkin and Maggie Bess to the protected library. There, as Dennis and Kalina argue over the situation, Kalina reveals to Arthur that the 4th ghost, the Withered Lover, is his deceased wife, both devastating and infuriating the man. After explaining the function of the machine and the ghosts, Kalina tries to convince Arthur to become the 13th ghost, lying to him that the thirteenth ghost is a failsafe that will shut off the machine.

When Dennis half-convinces Arthur otherwise, Kalina and Maggie go to the core of the machine, where Kalina knocks Maggie out with the Arcanum and reunites with Cyrus. When Kalina balks at Cyrus's orders to put Katy and Bobby in danger (so as to force Arthur to become the thirteenth ghost), Cyrus traps Kalina in a chamber which crushes her to death between 2 glass walls. 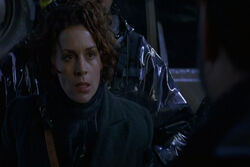 Kalina's Demise
Add a photo to this gallery

Retrieved from "https://villains.fandom.com/wiki/Kalina_Oretzia?oldid=4021640"
Community content is available under CC-BY-SA unless otherwise noted.