Kalinda is a Foutunata Seer within Arachnos in City of Heroes. For a long time Kalinda was one of the two starting contacts for villains starting in the Rogue Isles, but in the most recent issues Kalinda and her rival contact Matthew Burke were both replaced by Operative Kuzmin.

Kalinda is noted as the most important seer in Arachnos with the possible exception of Ghost Widow because of her prediction of “the Destined Ones” as she has dubbed them. Destined Ones are Villains of world changing potential. Unlike the less than ambitious or accomplished Hellions, Skulls and other NPC villains the player-villains have real potential to shape and change events in the world. Kalinda predicted them and informed Ghost Widow who in turn informed Lord Recluse. Kalinda was asked to prepare a list of all the newest “Destined Ones” just prior to their arrival in the Rogue Isles. In response to the newest names on the list Arachnos broke various criminals out of the Ziggursky Prison, a prison complex specifically designed to hold super-villain level threats. The newest villains flown in from the Zig were encouraged by the Arachnos pilot that flew them out to meet with Kalinda, though villains could express distrust of Arachnos and simply go to Matthew Burke instead to work for their own interests instead of repaying Arachnos. Both Matthew and Kalinda gave similar missions that broke in new to the Rogue Isles villains as they rose from mere criminals to super-villains.

Though Kalinda's role as a contact was retired with the newer issues of City of Heroes she is still considered one of the most important Seers in Arachnos for her prediction of the “Destined Ones” which Arachnos uses to keep track of potential assets and rivals. Lord Recluse had two plans which to date have been his largest scale plans. The first was to have Doctor Aeon construct a device known as “the Web Device” to give him every super-power in the world at once. The second was the defeat of the Freedom-Phalanx and his arch-enemy Statesman with a strike-force of super-villains less reputable than himself or his four patrons. The super-villains chosen though were all Destined Ones that Lord Recluse intended to use to humiliate Statesman with defeat against the so called no name villains. With their potential at his disposal Lord Recluse and all the Arachnos officials on the way up to him will be wary of the player character's power because of their status as Destined Ones on Kalinda's list. Kalinda still makes her post on Mercy Isle and watches all potential talent that enters Mercy Island. Though she does not confer with the newly arriving Destined Ones directly anymore she still reports who to look out for to Arachnos.

In the Mender Silos Task Force and the tie-in-comic's number two issue, Trading Places, Kalinda has an auspicious role to play. The back-story centered around the hero Manticore, being put on leave from the Freedom Phalanx for using lethal force. After the falling out with his fellow supers he goes to Arachnos instead. Kalinda is asked to read Manticore's mind to make sure his intent is genuine as she is Lord Recluse's most accurate living seer. Kalinda notes Manticore appears to be telling the truth and he is given a chance to be of use to Lord Recluse. However behind closed doors Kalinda states there is some emotional back-ground noise to Manticore's mind that has her believe he is in-fact up to something. Lord Recluse states he has plans for if Manticore proves to be untruest-worthy after all and if so Kalinda can have the honor of killing him. As it would turn out the Freedom Phalanx's signature psychic - Sister Psyche', had created a "mental mask" to fool other psychics into believing Manticore's intent and he had been trying to go undercover as a double agent. Manticore has to bring in Sister Psyche' to power a device, that would later be The Jade Spider, a giant mechanical spider, powered by a psychic, however the Arachnos Seers previously used to power it had died, so to prove his loyalty Manticore was asked to bring in Sister Psyche' to complete the Jade Spider. Sister Psyche' plays along and Manticore brings her to Lord Recluse, however when Sister Psyche's life looks to be in danger from the expirement Manticore strikes, Kalinda is Manircore's primary security concern but she is overcome, leading the two heroes to get away. Though Sister Psyche' managed to get out before her life was in-danger the Jade Spider was still successfully activated with the high-functioning psychic brain-waves set as a base operating algorithm.

Manticore, Sister Psyche' and the rest of the Freedom Phalanx would later be introduced to the true purpose of Lord Recluse putting up with the farce, the Jade Spider it-self. The titanic machine had Kalinda inside. Though the machine was capable of mass destruction on it's own destroying it is exactly what Lord Recluse wanted. The massive amount of psychic energy was being used, among other things, as a mental bomb, if the Jade Spider was destroyed or Kalinda killed the excess psionics would give-off a massive psychic wave that would render all of Paragon City brain-dead. Kalinda volunteered for the potential suicide mission powering the Jade Spider in order to make-up for not being able to read Manticore's mind correctly. Though eventually the Jade Spider would be disarmed without killing Kalinda, she was still rewarded for her willingness to give her life for the operation and was made Lord Recluse's most prestigious living seer for years.

Kalinda predicts the "Destined Ones".

Kalinda without her helmet 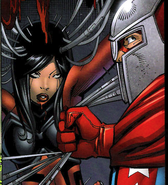 Kalinda being used as the psychic power-regulator/suicide-bomb for The Jade Spider.
Add a photo to this gallery
Retrieved from "https://villains.fandom.com/wiki/Kalinda?oldid=3575892"
Community content is available under CC-BY-SA unless otherwise noted.