King of Merlopia
Ruler of the Endless Sea

Overthrow his father to become king of Merlopia and ruler of the Endless Sea (succeeded).
Awaken Wojira (succeeded).
Exterminate the human race (failed).

Kalmaar is the main antagonist of Season 14: Seabound of LEGO Ninjago: Masters of Spinjitzu. He was the prince turned king of Merlopia (upon killing his own father, Trimaar) and adoptive brother of Benthomaar who sought to wipe out all life on the surface world. He is Nya and Benthomaar's archenemy.

He was voiced by Giles Panton.

Kalmaar was riding with his father, when Trimaar saw eels attempting to attack young Benthomaar. Kalmaar tried to tell Trimaar that Benthomaar was "none of their concern," however Trimaar still rescued Benthomaar. A short while after that, Benthomaar kept trying to please Kalmaar and be accepted as a brother. However, nothing Benthomaar could do would make Kalmaar accept him as his brother. At some point, Kalmaar went to the Tartarus Trench and found a scroll regarding the Temple of Wojira in the trench. He shows it to Trimaar, only to get reprimanded that the Tartarus Trench is dangerous and that he should not go down there. However, Kalmaar ignores Trimaar and gets Benthomaar to come with him by fraud attempts to convince Benthomaar that he realized the error of his ways and wants to make a fresh start. However, once they get to the Temple of Wojira, Kalmaar reveals that he still shows no love for Benthomaar, causing Benthomaar to swim away in sadness.

Kalmaar made futile attempts to awaken Wojira with faux amulets along with some of his guards. One of his scientists, Glutinous, explained that he needed more time, but Kalmaar yelled at him to try again. However, it failed causing the following energy pulse to reveal Nya and Maya's location by making the former glow. Then, Kalmaar saw Nya and Maya, and began to shoot at them by using his trident. He was able to resist a water blast and power down the APS suits. He then takes interest in Nya when he realizes that she is the Master of Water.

Kalmaar was listening to Nya and Maya tell each other about the Keepers and the Storm Amulet. He then asks for the Uncharted islands' location and asks Nya one more time but is interrupted by Gripe. Gripe lets Kalmaar know that King Trimaar is asking for him. He and Gripe then leave. He then arrives at the throne room and Trimaar asks Kalmaar if he is sinking ships. Kalmaar then declines and his adoptive brother, Benthomaar agrees. Trimaar says the if he finds out Kalmaar is lying he will be mad. He then tells Gripe to make them talk.

Glutionus finds Kalmaar and tells him that the Hydro Bounty was working and didn't get destroyed. Kalmaar then starts to think that surface dwellers are not weak. After the ninja tell Trimaar of Wojira but Kalmaar crashes in. He then argues with Trimaar and says that with Wojira they can correct the wrong of land. Trimaar then tells Kalmaar he is the king and his father and Kalmaar then fires a trident blast at Trimaar and injures him. He then cries for help and frames the ninja of attacking him. Benthomaar runs in and asks Kalmaar if it is true but Kalmaar tells him it is true. Kalmaar says that Benthomaar should comfort Trimaar and Kalmaar then says that he will honor his legacy. He orders Gripe to release the Ripper Sharks on the ninja. Gripe then comes and sees Kalmaar who now declares himself as "King Kalmaar".

Kalmaar strikes a trident that glows blue on the floor, making it now go red. Gripe talks to Kalmaar from behind, unnerving Kalmaar and making him blast the trident at his throne. Gripe informs Kalmaar that the Ripper Sharks were released, however they did not catch the Ninja, much to the dismay and anger of Kalmaar. After that, a few Merlopians came, thinking that Kalmaar sent for them. That lead directly to Kalmaar realizing that Benthomaar was helping the Ninja. Later, Kalmaar comes out of the throne room, only to see Lloyd in an APS suit, taking down all the Merlopians. Kalmaar tells Lloyd he'll "rue the day he ever set foot in the sea," only for Lloyd to throw a giant sword at Kalmaar, who ducks and barely misses it. When Lloyd escapes, Kalmaar, along with Gripe and a few other Merlopians go after the Ninja. Gripe continuously shoots at the Ninja, but then gets worried that he'll destroy Merlopia and it's inhabitants. However, Kalmaar shows himself not to care, by telling Gripe to shoot anyway. When the Ninja escape to a blocked-off cave, Kalmaar screams in anger.

Glutinous comes and tells Kalmaar that he may have discovered the location of the Storm Amulet and says that the island is in the storm belt. Gripe says nothing is there but Kalmaar corrects him. Kalmaar, Gripe, and other Merlopians travel to the Island of the Keepers and see the Hydro Bounty. When the ninja return with the fake Storm Amulet from Mammatus, Kalmaar, Gripe, and the Merlopians ambush them in the Hydro Bounty. They ask for the Storm Amulet and Nya tells Jay to give it to them but Kalmaar knows it's fake. He then destroys the Hydro Bounty and heads to the Explorers Club.

Riddle of the Sphinx

After the Trial by Sphinx, Kai, Ray, Wu, Cole, and Misako go a room where they meet Clutch Powers. Kalmaar and Merlopians break down the wall demands the Storm Amulet from Clutch. Clutch gives it to Wu and him and Kalmaar fight. Kalmaar and Wu push each other back and continue fighting.

All the action of the fighting goes out of the Explorers Club, and into the streets. Once Kalmaar sees that Antonia has the Storm Amulet, he starts going after Antonia and Nelson, continuously shooting at them and jumping on cars. After a while, Kai breaks into Kalmaar's hijacked truck, and they start fighting. Both Kai and Kalmaar scream when their truck plunges into a canal. Kalmaar jumps out of the canal and confronts Antonia. Realizing that she is just a papergirl, and yet had come closer to defeating him than anyone else, he confesses that he may have underestimated her "loathsome species". After a while, he jumps in the canal and swims away, but not before taking the Storm Amulet from Antonia.

Master of the Sea

Kalmaar, along with Gripe and a few other Merlopians walk across a dock, celebrating their victory, until Wu arrives and kicks Kalmaar. Kalmaar then orders his Merlopians to attack Wu. Kalmaar makes a futile attempt to leave, only to be kicked in the face by Misako and knocked down. Kalmaar grabs Misako with his tentacles. He then attempts to blast Misako with his trident, but being unable to, due to Wu interrupting him. Kalmaar then makes way on his mini-boat, and starts taunting the Ninja, and is very shocked by the Hydro Bounty appearing. He then faces Nya, still screaming that he stranded them on the Island of the Keepers. He then attempts to kill Nya, but is stopped by Benthomaar. Kalmaar then tries to persuade Benthomaar to team up with him, but this fails. Kalmaar then gets back into his mini-boat and glides away. When he sees that Nya is following him, he orders his troops to fire torpedoes. This causes an underwater explosion and allows Nya to circle above them and take the Storm Amulet from him before returning to the others. Unbeknownst to any of them, Kalmaar allowed her to make off with the fake amulet as he gets away with the real one.

The Calm Before the Storm

After Kalmaar awakens Wojira with the Storm and Wave Amulets, he takes control of her by using his trident then takes her to Ninjago City as his first act of destroying the surface world. Two days later, he and Wojira were able to get to Ninjago City and created a tsunami to flood the city.

Kalmaar continues to ride on Wojira and force her to wreck havoc across Ninjago City. When he notices Wu and the Ninja rescue civilians and fight back respectively, he tries to stop them. After damaging Jay's subcar and leaving him to drown in the flooded streets of the city, he is confronted by Nya and the two charge at each other.

He and Nya battle it out before he knocks Nya, only for her to grab onto the edge of Wojira's snout. Kalmaar attempts to kill Nya from there, but Nya jumps and escapes. Kalmaar and Wojira are now looking for Nya, when Kalmaar spots the Destiny's Bounty. Kalmaar also takes notice that the ninja are retreating. Kalmaar jumps on board the Bounty, only to find everyone gone. Kalmaar then hops on Wojira and sends a search party. Later, Kalmaar appears on a building, and is informed by Gripe that the Police Commissioner has been found. Kalmaar then busts into the Police Station and starts questioning the Commissioner, constantly threatening the Commissioner with his trident. He almost kills the Commissioner, but is stopped by Wojira crawling up the building. Kalmaar, and a few other Merlopians jump onto the roof. Kalmaar then jumps onto Wojira, and recognizes Nya right away. Kalmaar and Nya resume their battle.

The Turn of the Tide

During his reign and control over Wojira, he faces off against Nya. While fighting, he eventually ends up having to fight an enraged Jay due to the fact that he electrocuted Nya mid-battle. He soon kicks Jay off of Wojira’s head, and later fights Benthomarr, who subsequently broke his trident, ending his control over Wojira. Wojira then writhed around, threw Kalmaar into the air and then opened her enormous jaws to swallow him whole, killing him at last. 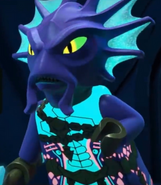