Member of the Barraki (formerly)

Leader of the League of Six Kingdoms (currently)

Leading the League of Six Kingdoms

Kalmah is one of the antagonists who appeared in the BIONICLE series, serving as one of the  main antagonists in the 2007 storyline and a minor anti-hero in the 2008 storyline. He is one of the Barraki, warlords whose goal was to overthrow the Great Spirit and rule the Matoran Universe before they were crushed by the alliance between the Order of Mata Nui, the Brotherhood of Makuta, and the Toa Mangai.

He was voiced by

Kalmah was one of the six warlords of the League of Six Kingdoms, ruling the northeastern region of the empire. Initially, Kalmah refused to join the League as he did't want them to dictate his actions. However, he was forced to join the empire when Takadox allied with Pridak.

Kalmah and his fellow Barraki were trapped in the Pit for thousands of years, until the Great Cataclysm destroyed their prison and freed them. Exposed to the Pit's mutagens, the Barraki were transformed into monstrous forms. Kalmah took command of an army of giant squid. He also discovered the Sea Squid, vampiric squid who could suck the life out of any living being. Kalmah tamed and bred the squid so that the Barraki could use them as ammunition for their squid launchers.

When the Mask of Life sank into the ocean below Voya Nui, Kalmah was informed of it by one of his sea squid. He met with Pridak, Ehlek, Carapar, Takadox, and Mantax to discuss the matter. The Barraki decided to split up to search for the mask.

While searching for the Mask of Life, Kalmah found Takadox sulking behind rocks. After interrogating him, Kalmah found that Takadox was spying on Mantax. Kalmah and Takadox followed Mantax to the remnants of the Pit, where they were trapped by the Zyglak. It looked like the three Barraki would be killed, but they were rescued by Nocturn.

When Kalmah heard of the arrival of six new Toa, he and the other Barraki went to confront them. Hahli insulted Kalmah, who attacked her in retaliation. Hahli was able to block his attack and knock Kalmah out.

The Barraki then took the Toa Mahri to their cave, where they held a meeting about what to do with the mask. It was decided that the Mask of Life would be given to Nocturn for safekeeping. While the other Barraki were delivering the mask, Kalmah and Carapar went to check on their prisoners. To their surprise, the Toa had escaped. Kalmah and Carapar went after them, coming across Jaller and Kongu. Kalmah managed to get the upper hand on Jaller, but he and Carapar were chased off when Kongu summoned a giant sea monster to protect them.

Kalmah and Carapar then learned that Nocturn and the Mask of Life were missing. Mantax was able to retrieve the mask and rendezvous with the Barraki at Razor Whale's Teeth. At the meeting, it was revealed that Takadox was the hidden traitor among the Barraki. The Barraki were then attacked by the Toa and Hydraxon. During the battle, the Toa stole the Mask of Life and escaped. The Barraki fought off Hydraxon and destroyed the Maxilos robot that was possessed by Makuta Teridax.

After Teridax's death at the hands of Mata Nui, Kalmah migrated to Spherus Magna. He was restored to his original form by the Mask of Life. 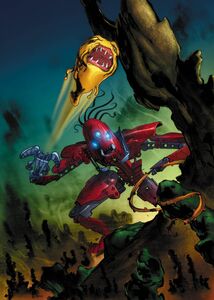 Kalmah as seen in the comics. 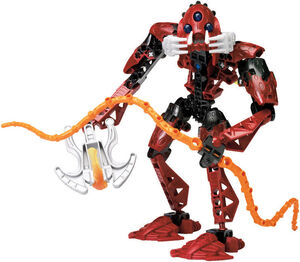 Kalmah in his set form. 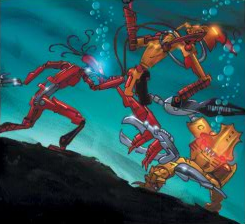 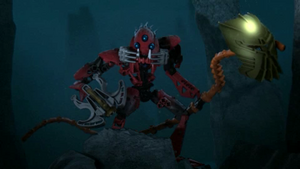 Kalmah attacks Takadox.
Add a photo to this gallery

Retrieved from "https://villains.fandom.com/wiki/Kalmah?oldid=3803874"
Community content is available under CC-BY-SA unless otherwise noted.