Mutated Insects
The Kamacuras are a species of giant praying mantises from the Godzilla series of movies that served as the secondary antagonists of Son of Godzilla and one Kamacura served as a supporting antagonist in Godzilla: Final Wars.

In the Kamacuras' first appearance, they are the secondary antagonists of the film. The Kamacuras were already the size of a full-grown human being living on Sollgel Island when a radioactive accident during a weather experiment mutated them to even larger proportions.

The three find Minya's egg and crack it open, revealing Minya. They attack him but his cries are answered by Godzilla, who comes and kills two Kamacuras, while the third flees.

The third eventually returns and attacks Saeko, but Minya intervenes and confronts the giant insect. Minya is quickly overpowered and just as the Kamacura is going to kill him, Godzilla saves him again and defeats the mantis. However, their battle awakens the giant spider Kumonga, who captures Minya and the Kamacura in webbing. Kumonga then injected poison into the mantis, killing it.

In this film, the Kamacuras first appeared attacking Godzilla, but Godzilla quickly kills two, the first by burning it with his atomic breath, and the second by pummeling it and then burning it. The third flees. Very shortly after, a Kamacura, possibly the third, appears again and chases the young boy Ichiro, who falls down a hole. The Kamacura is unable to chase Ichiro any further and leaves. Not only does this take place in the mind of Ichiro, but most of this is actually stock footage from Son of Godzilla.

A Kamacura appears living on Monster Island, living in peace with the other monsters.

A Kamacura was among the monsters brainwashed by the Xiliens. It attacked Paris, and clashes with a warship called the Ecalir, but is beamed away by the Xiliens to make it look like they saved the world by eliminating the kaiju. When they are found out, the monsters are sent again to finish the job. As Kamacura destroyed the rest of Paris, the Ecalir attempted once again to kill the Kamacura, but was destroyed by the mantis along with support from the Xilliens. When Godzilla arrives in Kanto while following the Gotengo, the Xiliens release Kamacura to battle him. Despite trying to camouflage into the hillside to attack from behind, Godzilla easily defeats the Kamacura by tossing it onto an electrical transmission tower, causing it to be impaled and die instantly. 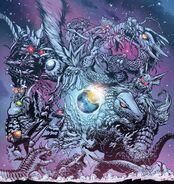