Aid General Orlov in his plan to detonate a warhead in a U.S. Air Force Base in West Germany for Soviet forces to conquer Western Europe in exchange for jewels stolen from the Kremlin (all failed).

Kamal Khan (Pashto: کمال خان) is one of the two main antagonists (along with General Orlov) of the 1983 James Bond film Octopussy.

He was portrayed by the late Louis Jourdan.

Khan is a suave exiled Afghan prince living in India in the Monsoon Palace. He has a penchant for fine food and liquor, priceless jewels, and atomic weaponry.

He associates with the power-crazed General Orlov in an attempt to unleash nuclear holocaust in Western Europe, by planning to detonate a nuclear bomb inside a US airbase, using Octopussy's Circus as a cover. The ensuing outrage at this "accident" will encourage NATO to abandon nuclear arms, and allow Orlov's armies to invade the West.

After Khan and Gobinda escape with the captive Octopussy, they climb aboard Khan's plane. Bond jumps onto the outside of the plane and defeats Gobinda in hand-to-hand combat while Khan makes the plane do dangerous flips and turns.

Bond detaches the fuel line in the plane's right engine, causing the plane to nosedive, leaping off with Octopussy just as Khan desperately tries to land. The runway is too short and the plane ends up going over a cliff. With only one working engine, the plane veers into the side of a cliff and explodes with Khan inside. 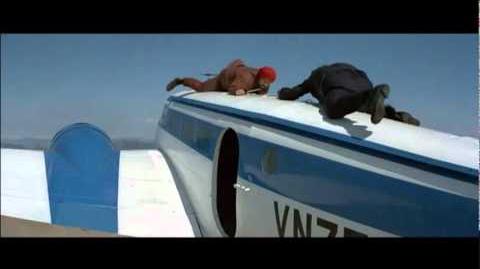