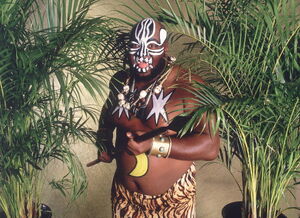 Kamala, also known as the "Ugandan Giant", is a wrestler who had several short runs in the World Wrestling Federation in the 1980s and 1990s. His very first began in 1984. As a heel, managed by a masked "handler" in safari clothing known as "Friday" (who was played by a variety of different people depending on where they were performing) and "Classy" Freddie Blassie. He would later come under the care of various other managers, but most notably his permanent handler Kim Chee (dressed as handler "Friday") would remain at his side. Kamala was portrayed as an untamed savage who could not form words and other heel managers would do the talking for him.

Kamala competed in a high-profile steel cage match, which he lost after André twice sat on his chest. Kamala also appeared in a segment of the WWF's Tuesday Night Titans, where he ate a live chicken on the air.

Kamala battled Hulk Hogan and Jake "The Snake" Roberts, the latter feud beginning after Roberts exposed Kamala's fear of snakes. He was then managed by Mr. Fuji and formed a tag team with Wild Samoan Sika, before leaving the WWF in late 1987.

He then wrestled for the Memphis-based United States Wrestling Association, feuding with Jerry Lawler and Koko B. Ware, and winning the USWA Unified World Heavyweight Championship four times. Kamala returned along with Kim Chee, and managed by Harvey Wippleman. Kamala turned face to take Reverend Slick as his manager. Slick set out to "humanize" Kamala, by teaching him to bowl. He was scheduled to compete in the 1993 Royal Rumble, but did not appear at the event. He also had a match scheduled against Bam Bam Bigelow at WrestleMania IX but it was canceled without explanation before the event began.

Kamala joined World Championship Wrestling (WCW). He was introduced to end Hogan's career. In his first WCW pay-per-view appearance, he defeated "Hacksaw" Jim Duggan at Bash at the Beach 1995. He lost in his second and final WCW PPV He was part of the "Dungeon of Doom" team. Kamala was scheduled to wrestle Randy Savage at Halloween Havoc 1995 butWCW was not interested in offering him a full-time contract. Due to this he was replaced by The Zodiac at the event and Kamala left the company.

After making sporadic appearances on the independent circuit for the next few years, Kamala participated in "The Gimmick Battle Royal" at WrestleMania X-Seven and was eliminated by Sgt. Slaughter. On July 26, 2004, he made a surprise return to World Wrestling Entertainment, participating in a Raw Diva Search segment on RAW, in which the female contestants were instructed to try to seduce him. Kamala faced Randy Orton on the August 11, 2005 edition of SmackDown! (once more accompanied by Kim Chee) but the match was interrupted by a message from The Undertaker to Orton, and ended in a no contest. Kamala appeared at the 2005 Taboo Tuesday event, as one of the choices for Eugene's tag team partner. He lost the fan vote to Jimmy "Superfly" Snuka, but came to the ring after the match to deliver a big splash to Tyson Tomko. On June 25, 2006, at Vengeance, he accompanied Eugene to the ring (along with Doink the Clown and Hacksaw Jim Duggan) to take on Umaga who had a similar gimmick to Kamala. Umaga quickly won the match, after which he attacked Eugene, Doink, and Duggan. Before Kamala and Umaga could fight, Umaga's manager, Armando Estrada, intervened. Kamala faced Umaga the following night on Raw and lost the match, marking his final televised appearance.

Retrieved from "https://villains.fandom.com/wiki/Kamala?oldid=2208732"
Community content is available under CC-BY-SA unless otherwise noted.