Get revenge on those who wronged him (succeeded).

Kaman Scott is the main antagonist of the Criminal Minds episode "Devil's Night". He is a serial killer who strikes on the three nights of Devil's Night and uses fire to get revenge on people who have wronged him.

He is portrayed by Leonard Roberts, who also played Forrest Gates in Buffy the Vampire Slayer and Nam-Ek in Smallville.

Kaman Scott was born in Detroit, Michigan and would often commit crimes such as vandalism and shoplifting. He tried to go straight after falling in love with Tracy Anderson, especially after she told him she was pregnant with his child. One night, Kaman was involved in a car accident with his former partner-in-crime, Tommy Proctor. Tommy walked away without a scratch, while Kaman suffered severe burns and fell into a coma. Fearing that Kaman wouldn't wake up, and she would have to raise the baby alone, Tracy left him. After waking up from his coma, Kaman was evicted from his apartment by his landlord, Tony Torell.

Wanting revenge, Kaman abducted Tommy on the first day of Devil's Night and burned him alive. In the next two days, he abducted two more people whom he felt had wronged him, and burned them alive as well. The next Devil's Night, he killed three more people as an act of revenge and went dormant again. At some point, possibly before starting his killings, he started working as a welder, and used his skills to make a cage for his victims.

On the first day of Devil's Night in 2010, Kaman abducts and burns Torell alive in an old engine factory. The BAU are finally called in to investigate the Devil's Night homicides.

With the FBI getting involved, Kaman starts to feel the pressure and gets sloppier in his abductions. He abducts Christopher Edwards, a contractor who fired him seven years earlier. After seeing the police roadblocks, decides to burn Edwards on an seemingly empty street. However, a car hits Edwards and Kaman is forced to flee.

Realizing that he is close to being caught, Kaman runs to a restaurant where Tracy's father Jay works and interrogates him to find out where Tracy is. Jay doesn't tell him where Tracy is, but Kaman is able to figure it out, and he sets the restaurant on fire.

The police arrive to the scene, and BAU Agent Aaron Hotchner is able to save Jay. Before Jay is taken away in an ambulance, Hotchner manages to get some information out of him that helps the rest of the BAU team figure out where Kaman is going.

Kaman shows up at Tracy's aunt and uncle's house and attacks them both. He ties them up and threatens to set them on fire, if they don't tell him where Tracy is. Tracy comes out and talks to Kaman and upon seeing that he has a son and really does have something to live for, surrenders. 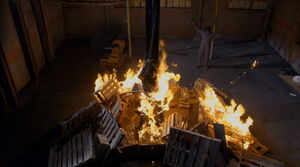 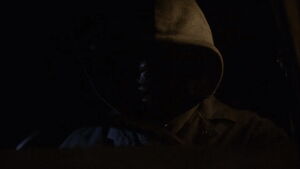 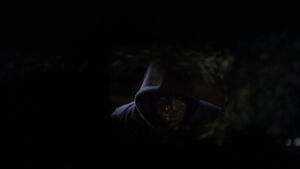 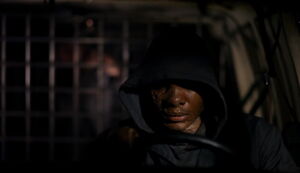 Kaman driving around with Chris Edwards in the back. 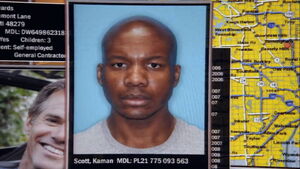 Kaman's mugshot and what he looked like before the accident. 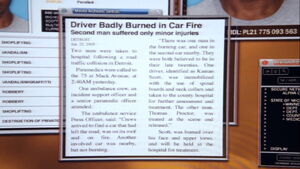 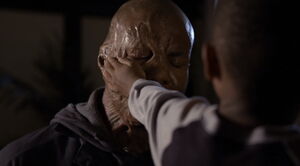