He was portrayed by the suit actor Eitoku and voiced by the singer, Mitsuru Matsuoka, who also played Katsumi Daido.

Kamen Rider 4 appears in a post-credits scene, where the Great Leader of Shocker overlooks him being operated on.

It is revealed that Kamen Rider 4 was created by Shocker using parts from the recovered History Modifying Machine, resulting in Drive and the other Riders being caught in a series of time loops.

By the fifth loop, Kamen Rider 4 was completed and sent out to confront the Riders. He attacked Shinnosuke in the Tridoron using the Sky Cyclone. Drive confronts 4 alongside Faiz and Zeronos, but 4 overpowers the three Riders and kills Shinnosuke as he is defending Faiz.

After the timeline resets once more and a sixth loop begins, Kamen Rider 4 confronts the three Riders once more when they arrive at a factory owned by Shocker. While Faiz and Zeronos fight the other Shocker forces, 4 battles Drive and has a more even fight with him than the last time, but Drive is still unable to overpower him. The loop then ends after Kiriko is killed.

In the final loop, Kamen Rider 4 faces off against Drive once more in the final battle. After a brutal fight, Kamen Rider 4 has his Sky Cyclones destroyed and his leg broken before Drive attempts to finish him off with a Formula Drop Kick. 4 attempts to deflect it with a Rider Punch but Drive manages to overpower him by increasing the output of the Shift Brace, overwhelming and destroying the Shocker Rider.

Kamen Rider 4 was resurrected as a demon as part of the Devil Rider Corps. He acted as an enforcer for the demons who controlled the future in 2071. When the future George Karizaki sent Ryunosuke Momose back in time with the Cyclotron Driver, the Devil Rider Corps were sent to attack George's laboratory, but were fought off by Touma Kamiyama, Rintaro Shindo, Yuri, Vice, Daiji Igarashi and Sakura Igarashi using the Clone Rider system. 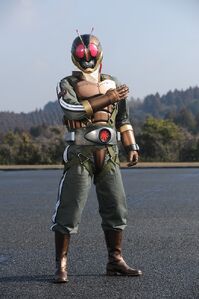 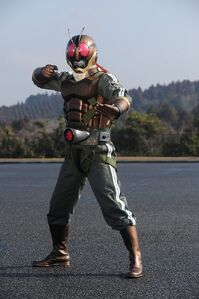 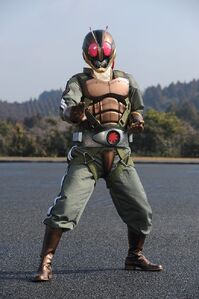