Manipulating history to his liking.

Erase the history of the Heisei Kamen Riders.

Deeming the Heisei era to be a "mess" due to the numerous conflicting Kamen Riders, SOUGO Tokiwa and the Quartzer sought to remake it into a more unified timeline with themselves as the Kamen Riders.

After Sougo was abducted along with several other children by Swartz, his alternate self bestowed time powers onto him so that he would be selected as king, beginning Sougo's journey into Oma Zi-O. By collecting the powers of the Heisei Kamen Riders, Sougo was secretly doing the Quartzer's bidding by unifying the conflicting worlds of the Heisei Kamen Riders into one timeline for the Quartzer's to destroy.

In order to ensure past Sougo Tokiwa would become Oma Zi-O in the future and unify all Rider worlds, the leader of the Quartzer supplied Woz with the Oma Advent Calendar and sent him back in time with the knowledge of future events to guide the flow of time to the Demon King's rise. This included bringing about the downfall of the Resistance that opposed Oma Zi-O and guiding past Sougo to become Oma Zi-O in the future.

After Sougo unlocked the power of GrandZi-O, the Quartzer leader sent Kagen and Jogen to the Sengoku Era to eliminate Krim Steinbelt's ancestor and thus prevent the creation of the Drive Driver, which would in turn negate the GrandZi-O Ridewatch, in order to arrange Sougo's meeting with Krim and bring about a scenario where Sougo would help Krim restore history so Krim and Gou would give him the Drive Ridewatch.

After Sougo receives the Drive Ridewatch from Krim Steinbelt and finishes collecting all the Ridewatches, Woz took all the Ridewatches and summoned the Quartzer's throne, announcing that Sougo Tokiwa would reign as king. As Sougo walks up the steps to the throne to claim the Ridewatches and take a seat on the throne, SOUGO appears with the other Quartzers standing on either side of him. Introducing the Quartzer as the "Wardens of History", SOUGO has the Quartzers force Geiz and Tsukuyomi to bow before him as he reveals to Sougo that Woz was a Quartzer all along and that he was really just a body double being used to gather the Ridewatches. As Sougo protests, SOUGO swiftly defeats him without transforming and has him imprisoned. With his alternate self out of the way, SOUGO commences his ultimate plan: to erase the history of the Heisei Kamen Riders and create a new Heisei era where the Quartzers take their place as Kamen Riders. Transforming into Kamen Rider Barlckxs, SOUGO summons the Dai Mazines and has them combine together to form a portal which he uses to suck up the World of Heisei and into his own world, thus bringing about a new era where he rules as king of time.

However, Sougo is freed by Tsukuyomi and Gou Shijima, and goes to confront Barlckxs to prevent him from erasing the Heisei Riders. Transforming into GrandZi-O, Sougo fights Barlckxs but is beaten back by Barlckxs' tremendous power. He summons the past Kamen Riders to help him but Barlckxs easily destroys them all. Sougo asks to know why he is trying to erase the Heisei era. Barlckxs declares the Heisei era to be a mess due to the conflicting stories and lore of each of the Heisei Kamen Riders, and that he seeks to erase it all and create a new Heisei era with a much more streamlined continuity between Kamen Riders. Barlckxs then defeats Zi-O and knocks him out of his transformation before tossing him up to be devoured by the portal. Before Sougo can be sucked in though, Oma Zi-O interferes to prevent SOUGO from altering the future and gives present Sougo the Oma Zi-O Ridewatch.

Combining the future power of Oma Zi-O with his own Zi-O Ridewatch, Sougo uses the Oma Ridewatch to transform into Kamen Rider Zi-O Oma Form and summon the past 19 Heisei Kamen Riders, along with Kamen Rider Brain, Zangetsu, the Goriders and G, to do battle with SOUGO and his army of Dai Mazines and Kasshins. Seeing Sougo become king, Woz defects from the Quartzer and returns to Sougo's side, tearing pages out from the Oma Advent Calendar and causing the portal to stop functioning as the Dai-Mazines detach. While Zi-O Oma Form fights Zamonas and the Dai Mazines, Barlckxs and Zonjis duel Woz and Geiz. While Woz has his back turned, Barlckxs stabs Woz with his Quarcane as punishment for his betrayal and kills him, leaving his dying body to be scooped up by Geiz. Barlckxs and Zonjis then turn their attention to the Heisei Riders. After the 20 Heisei Kamen Riders all assume their final forms and combine their powers to defeat Zonjis and Zamonas, Barlckxs grabs the J Ridewatch Zonjis dropped. Using the Black RX BioRider Ridewatch and the J Ridewatch, Barlckxs grows giant and invincible, fighting off all of the Kamen Riders with his tremendous power. However, refusing to give up, the 20 Heisei Kamen Riders all perform their Rider Kicks on Barlckxs. Barlckxs summons a rectangular shield to block their attacks, but the Riders all use their combined power to penetrate through the shield and destroy the Quartzer Leader, creating an engraving of a kanji in the shield that spells out "Heisei" as Barlckxs explodes. 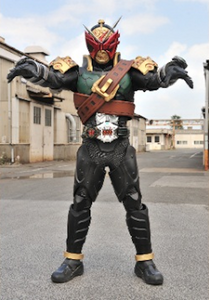 Retrieved from "https://villains.fandom.com/wiki/Kamen_Rider_Barlckxs?oldid=4101898"
Community content is available under CC-BY-SA unless otherwise noted.