Believing himself to be the most powerful Rider.

Rule over the rest of the Earth.

Kamen Rider Core is purely an energy-based Rider, he was created from the Sasori, Kani, and Ebi Core Medals, which appeared to house his consciousness, merging with the Memory Memory which held the memories of all of the older Showa Era Kamen Riders and the True Gaia Memory, thanks to the Pteradon Yummy gathering them.

Because of these memories being housed in him, Core possessed various traits from previous Riders. The main source of his power came from a crystallized form of Earth's energy. The crystal was destroyed by Double CycloneJokerXtreme's Bicker Charge Break and OOO's OOO Bash.

This, however, did not drain his powers completely, as Double and OOO had believed. Instead, it only removed some of his power, and in his fury he stopped (albeit briefly) OOO from assuming Tajadol Combo. However, this was only temporary, Kamen Rider Core was then slain at the hands of Kamen Rider Double CycloneJokerGoldXtreme's Golden Extreme & Kamen Rider OOO Tajadol Combo's Prominence Drop.

Being an amalgamation of the memories of all previous Riders and their battles, Core believed himself to be the most powerful Rider, and being for that matter, in existence.

He sought to use the power he had to rule over the rest of the Earth. He was arrogant, calling Double and OOO losers and worms. He responded with shock and fury when Double and OOO told him how he was nothing compared to true Kamen Riders, who protected the innocent at the cost of their own peaceful lives.

Kamen Rider Core appears as a boss in the videogame All Kamen Rider: Rider Generation 2.

As a monster powered by Earth's inner core, Kamen Rider Core has powers over it which gives him pyrokinetic powers, like burning anything that comes into physical contact or releasing a green energy beam from his mouth that can set a city on fire.

Core can turn his lower body into a motorcycle called the Bike State, reminiscent of Showa Era Rider Machines, to increase his speed. Core's Bike Mode also proved to be durable enough to smash through dense rocks as if they were nothing. 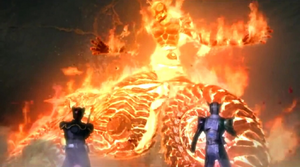 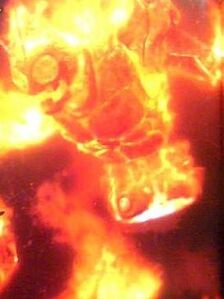