Kamen Rider Ginga is a Kamen Rider from space seeking to conquer the entire universe and a major antagonist in Kamen Rider Zi-O. He is one of the Kamen Riders who emerged from the timeline created due to Sougo and Geiz's meddling. He is extremely powerful, able to easily overpower Zi-O Trinity, and because of his immense strength, he believes he has the right to rule over everything in the universe.

He is voiced by Tomokazu Sugita, who also voiced Demushu in Kamen Rider Gaim and Dark Lugiel in Ultraman Ginga.

Kamen Rider Ginga emerged from a distortion caused by Zi-O and co.'s alterations to the timeline.

Kamen Rider Ginga arrived on Earth via a meteor during the Riders' fight against Another Kiva, crashing into a nearby hillside. Kamen Rider Ginga then emerged and attacked both the Kamen Riders and the Time Jackers with an energy blast, announcing that he will be the one to destroy the universe. Sougo, Geiz and Woz transform into Zi-O Trinity to face him, but Kamen Rider Ginga easily overpowers Zi-O Trinity with little effort.

Teaming up with the Time Jackers, Woz is able to incapacitate Ginga by blocking out the source of his power, the sun, forcing him into temporary hibernation. After Ginga awoke again, he returned to rampaging until he was confronted by Zi-O, Geiz and Woz again. Ginga attacked the three Riders but, rather than fusing into Zi-O Trinity again, the three instead all performed their Rider Kicks separately and with their combined power were able to defeat Ginga, forcing him to flee into space in a beam of light that left behind the Ginga Ridewatch.

Kamen Rider Ginga is an evil powerful alien warlord, who can stop at nothing until he destroys the Earth, including humans themselves. Suddenly, Ginga is very chaotically evil, hateful, and arrogant. He was responsible for distorting time and space. He bested the Kamen Riders and the Time Jackers, forcing them to retreat. Later, he would be led to a hasty downfall for good. 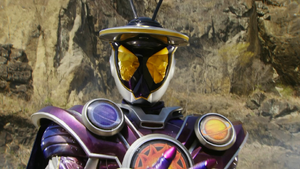 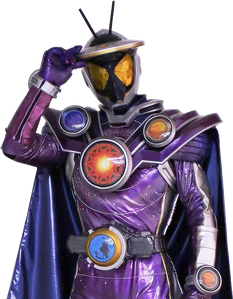 Retrieved from "https://villains.fandom.com/wiki/Kamen_Rider_Ginga?oldid=3677806"
Community content is available under CC-BY-SA unless otherwise noted.