Eliminate the last remaining Kamen Rider so that Shiro could ultimately win the Rider War and the coveted wish.

Enigmatic Assassin
Kamen Rider Odin is the central antagonist in Kamen Rider Ryuki. He is Shiro Kanzaki's personal representative in the Rider War, possessing incredible strength, the ability to teleport around the battlefield, and many powerful Advent Cards such as Time Vent and Survive Mugen. His Contract Monster is Goldphoenix, who possesses the highest Attack Points of any monster in the Rider War.

He appeared proclaiming himself as the "Final, 13th Rider". The identity of Kamen Rider Odin is unknown. When someone transformed using the Odin Advent Deck, they were turned into a mindless puppet controlled by Shiro Kanzaki. Odin had three purposes. He could interact with the real world in ways that Shiro Kanzaki - being part of the Mirror World - couldn't, such as using the Time Vent card to turn back the flow of time. He was also assigned to protect the life of Yui Kanzaki at all costs. And finally, he was Shiro Kanzaki's trump card in the Rider War, created to eliminate the last remaining Rider so that Shiro could ultimately win the Rider War and the coveted wish.

Odin appeared briefly in many episodes, his debut revealed him using the Time Vent card and had time reversed. Shinji was then the only person who appeared to feel the effect of the time change, and tried to alter the course of time which happened. Unfortunately Shiro told him that that cannot happen as the course of time altered in the past would directly affect the future (which obviously would affect the Rider War and its outcomes). Odin appeared in later episodes, fighting other Riders (which strangely appear only as Kamen Rider Ryuki and/or Kamen Rider Knight).

The first Kamen Rider Odin was a homeless man whom Shiro Kanzaki handed the Advent Deck to, turning him into a puppet. After turning into an embodiment for Kamen Rider Odin, he teleports himself to the four Riders, Ryuki, Kinght, Ouja and Zolda who were fighting at that time, joins the brawl.

He easily defeated them and use Time Vent card to fix the mistakes by teleporting 6 months into the past, unknowingly that Ryuki also snucked along who also took this opportunity to stop the Rider War. After Odin firstly appeared at the same spot (with the six month period is over), Ryuki knows where Odin teleports to and hits him with a Strike Vent. Odin asks how he knew and Shinji reveals that he left post-its over his computer at work and at the Cafe that told him to strike where there are golden feathers. However, much to Shinji's frustration, nothing has changed ever since from the past.

Ren is intercepted by Shiro who after being demanded by Ren to fight, sends Kamen Rider Odin to fight for him. Odin is even able to counter a Survive Final Vent by Knight Survive, knocks him out of Survival Mode and then throws exploding Feathers at him. Just as Odin is about to smash Ren's Deck, Ren quickly plunges his Lance into Odin's Deck, vanishing him into dusts.

The true identities of the Second Odin and Third Odin are unknown, but it can be assumed that they were similar to the first Odin - innocent people turned into dolls by the Odin Advent Deck.

Fearing that Shinji/Ryuki will always interfere with his plan, he sends the Second Odin to fight him who in turn uses the Survive form. Odin summons his Sword and they begin to fight again with Odin easily taking advantage. Ryuki activates a Shoot Vent but Odin quickly deflects it. He activates a Strange Vent Card which turns into a Steal Vent Card. With this, he's able to steal Odin's Weapon. However, Odin quickly uses a Steal Vent of his own to take it back. Knight joins in but tells Ryuki that he's only there to fight. Both of them ride their Contract Monsters (In Motorcycle Form) towards Odin but...

The gold Rider easily jumps over them and attacks them. However, a devastating Yui shrieks, provoking the trio Riders' awareness with Ryuki takes the opportunity and charges at Odin and holds him down to stop him from moving. Knight activates his Normal Final Vent and destroys Odin.

Ren Akiyama arrives at the Kanzaki Household and sees the third and final Odin in a mirror. Ren comments about how Shiro manages to recreate Odin over and over again. Shiro tells him that Odin is his representative in the Rider War as he has no physical form. Ren calls him a puppet and Shiro replies saying that Ren would not be able to beat Odin regardless. Ren transforms into Kamen Rider Knight and enters Mirror World. He immediately changes into Survive and attacks Odin.

Knight continues to fight Odin but is doing so unsuccessfully. He's knocked to the ground and Odin prepares to use his Final Vent. Knight gets up and tries to attack Odin. Meanwhile, Shiro finally realizes that even if he did restore her life, that Yui would continue to refuse it. Shiro screams in anger causing all the glass in the house to explode again. Because of this, Odin (unable to complete his Final Vent) begins to react to it negatively and fades away, informing Knight that he is the final rider. Knight, realizing that he is the Final Rider tries to reach for the wish he was promised.

Ironically, Odin doesn't appear in the movie Episode Final, though as one of the remaining surviving Riders.

Kamen Rider Odin made an appearance in the 13 Riders special amongst the Riders against Ryuki and Knight. After Ryuki was knocked to ground, Odin grabbed his Advent Deck and destroyed it. Odin appears later in one ending with the other remaining Riders who used their Final Vents on Shinji, then as Kamen Rider Knight Survive.

Odin appears in two Hero Saga stories which is Advent Calendar and World of If.

In the Advent Calendar, Odin didn't participate in the fight but his work is to grant the winner's wish. After the Shinichi Kido-possessed Ryuki (turned into Ryuga due to being tainted) win the Rider War, he appears and grants the winner's wish which is to revive all victims of the Rider War.

In the World of If, after Eri Ogawa died in the hospital, Ren Akiyama quits being a Kamen Rider while throwing away Knight's Advent Deck. While wandering at the streets, Shiro Kanzaki shows up and gives him an Advent Deck and turned him into Odin's puppet. Ouja, as the final Rider, stands before Odin. His wish is for the Rider War to continue for all eternity. While in the middle of the battle, Alternative Zero jumps in and join forces with Ouja in order to fight Odin. Ouja activates his Final Vent; Venoviper transforms into a bike and charges at Odin, spitting poison along the way. A moment before it his him, though, he activates his Time Vent and vanishes, then reappears on Venoviper's seat, behind Ouja and strikes him quickly.

Right before he dies, Asakura sees Odin's face, through the hole in his helmet melted through by Venoviper's poison, revealing Ren's face. The mask completely crumbles away and Ren comes back to his senses. He looks down at his body and realized what happened. With a full anger, he yells out the name of Shiro Kanzaki as he appears and laughing in glee. Now that Odin is the victor of the Rider Battle, and now he can finally grant Yui a new life. Ren notices that the Alternative Zero and has a weird feeling about him as he heads over and yanks out the deck. Turns out it was Yui all along. She revealed that she borrowed it from Kagawa to stop Shiro, and reaches out to him. But he has no body, and can't grasp her hand. Yui dies as Shiro failed to grant her a new life and mourning her death.

Kamen Rider Odin was part of a group of reinforcement riders led by Akira Date/Kamen Rider Birth to aid the primary riders in defeating the Rock Great Leader. All the Kamen Riders got on their bikes and performed the All Rider Break attack which destroyed the Great Leader.

The Second Odin appears as a Dark Rider in the video game Kamen Rider Battride War. He has the ability to move at blind speed which rise the battle difficulty. He also can summon gold feathers to attack the enemy. Odin also can attack using his Sword Vent and also can trick his opponent into battling his puppet. Though, Odin is weak at defense.

As a fighter, Odin was observant, methodical, silent, and usually only moved when using a card or attacking, otherwise relying heavily on his ability to teleport, and his opponent's brashness. Odin is mostly a melee fighter, though has been known to send a gust of exploding feathers while his opponent was vulnerable. Kamen Rider Femme can also use these abilities, but to a more limited degree. Interestingly, his teleportation ability and gust attacks do not require an Advent Card to use.

He is a balanced Rider, relying more on magic than physical ability or firearms, although he did possess melee weapons. Odin's lack of concern towards living left him fearless, which was his most intimidating factor against the other Riders. Aside from his ability to turn back time in conjunction with Kanzaki's abilities using Time Vent, Odin had the ability to traverse time and warp to any location he chose. His final vent, Eternal Chaos, involves Goldphoenix picking him up in its flaming talons and throwing him at his opponent. Even compared to Kamen Rider Knight and Ryuki in their Survive forms, Kamen Rider Odin is the most powerful of the 13 Riders. 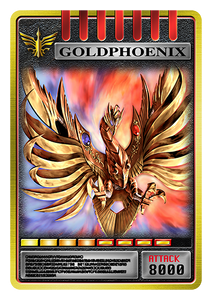 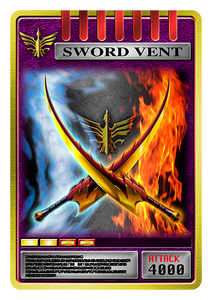 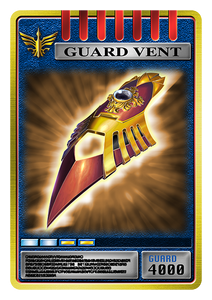 Guard Vent (AP: 4000): Conjures Gold Shield, a shield made from the Goldphoenix's tail 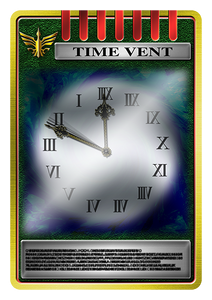 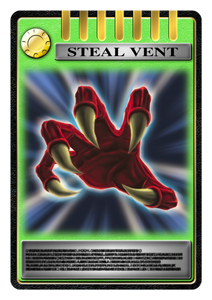 Steal Vent: Allows Odin to steal any weapon or defense object his opponent may have 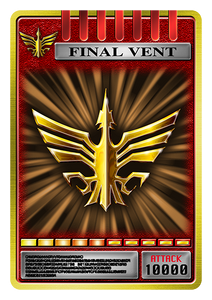 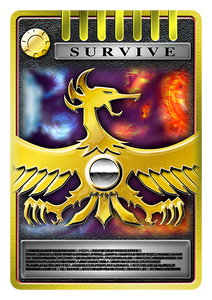 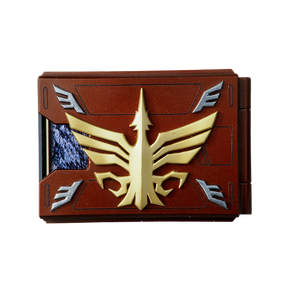 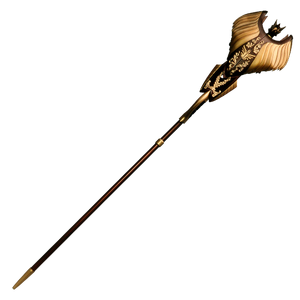 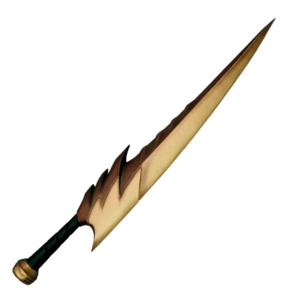 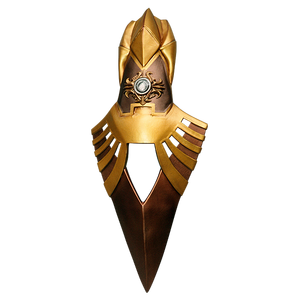