Kamos is a supporting antagonist in the Fall of the Trident campaign of the video game Age of Mythology. He is a minotaur and leader of a group of pirates called the Black Sails. He's also one of the two main henchmen of the main antagonist Gargarensis and a longtime nemesis of the main hero Arkantos.

He was voiced by Peter Lurie, who also played John Jack Daniel Torrance in The Grim Adventures of Billy & Mandy.

Kamos was born in Knossos 39 years before the events of Fall of the Trident. When he was a calf, he was kidnapped by an Egyptian fishing ship, and raised by the goddess Bast. Kamos harbors great anger for unknown reasons, using his background to lead Egyptian pirates in thievery and murder. His pirates are known as Black Sails, and they're recognizable from their ships' black sails that are adorned by a red minotaur skull. At some point, Kamos attempted to tame a Leviathan by hand-feeding it, losing his right hand. It was afterwards replaced with a khopesh.

Kamos has attacked Atlantean trade ships and the coasts of Atlantis itself multiple times, facing the renowned Atlantean admiral Arkantos many times. However, Kamos has always retreated to one of his many island strongholds before Arkantos can capture him. Arkantos' wife was killed during one of the Black Sails' raids, turning Kamos into Arkantos' personal enemy. There is also implied to be a sinister connection between Kamos and Theris, an Anubite bandit lord who was killed by Arkantos years ago.

At the beginning of Fall of the Trident, Kamos leads yet another raid on Atlantis. While Arkantos keeps the Black Sails at bay, Kamos steals the trident from a statue of Poseidon, the patron of Atlantis. The theft is noticed only after the pirates have retreated. Arkantos sets sail to pursue Kamos and retrieve the trident on his way to help with the Trojan War. Arkantos finds Kamos hiding on a Mediterranean island, south of Spain. The admiral proceeds to destroy the pirate's settlement and retake the trident. Cornered on a ledge over the sea, Kamos swears to one day mount Arkantos' head on his mast. He then jumps on the back of a Leviathan that transports him away.

At the end of the Trojan War, Gargarensis is informed by Kemsyt about Kamos's loss of the trident, and demands to speak with him. The cyclops' other main henchman Kemsyt informs Gargarensis that Kamos has returned after losing the trident. Later, Kamos travels with Gargarensis to Egypt aboard one of the minotaur pirate's ships after Arkantos foiled Gargarensis' attempt to open the Tartarus gate of Erebus. Discussing whatever or not Arkantos will continue to be a problem and if any of the Egyptian gods stand against them, Kamos swears that if Arkantos manages to escape Erebus, he won't escape Kamos again.

As the heroes attempt to leave the city of Abydos with one of the pieces of Osiris, they have to fight off both Kemsyt and Kamos' troops. Kamos keeps sending his pirate vessels to harass the heroes until they destroy the peninsula's lighthouse. Without the lighthouse, the pirate vessels cannot navigate through the rocky waters safely.

Arkantos and Ajax find the Black Sails' stronghold where Kamos is personally guarding the fourth piece of Osiris on Gargarensis' orders. With the help of the natives, the two heroes launch a surprise attack in the stronghold. Kamos is cornered by Arkantos on a cliff, and the Atlantean asks what Kamos spoke about hanging his head from the pirate's ship the last time. Defiant, Kamos states that Arkantos will still die someday, even if not by his own hand. He then lashes out to attack, but Arkantos raises his spear, impaling Kamos through the chest. Pushing himself from the spear, Kamos staggers and falls off the cliff, dying instantly as he lands on the rocks below.

Kamos is a hero unit who fights by slashing with his khopesh. He has the same Gore special attack as regular minotaur units, though more powerful. He can send human units and some of the myth units flying, but not other hero units. Being a minotaur, Kamos is much tougher than human soldiers, and stronger than most heroes.

Kamos is a minotaur with some of the characteristic features of the archetypical pirate, particularly his prosthetic arm. He is thus much larger and more powerful than most humans, though somewhat smaller than the average Minotaur (being 7'5" tall to the typical minotaur's 9'). 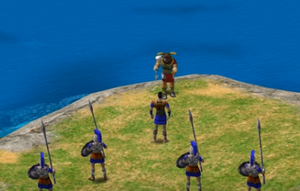 Kamos cornered by Arkantos in the beginning of the campaign. 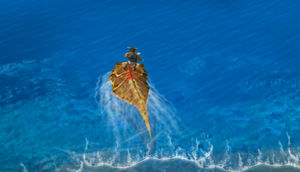 Kamos escaping on the back of a Leviathan. 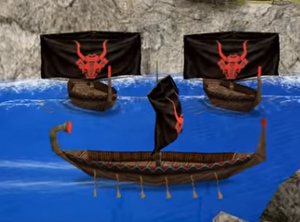 Some of Kamos' iconic pirate ships. 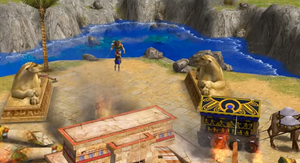 Kamos being cornered by Arkantos for the last time. 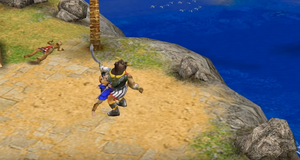 Kamos getting himself impaled by Arkantos. 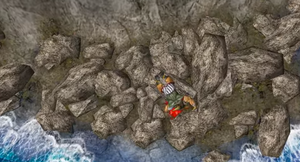 Kamos lying dead on the rocks.
Add a photo to this gallery

Retrieved from "https://villains.fandom.com/wiki/Kamos?oldid=4322275"
Community content is available under CC-BY-SA unless otherwise noted.