The Avatar of Mountains and Lakes

The ability to create Sky

Kanako Yasaka is the current deity of the Moriya shrine in the Touhou Project videogame series and the final boss of the tenth game, Mountain of Faith. Her pride, her fatal mistakes because of naïveness, using her powers for selfish means and her extreme methods to gather faith at everyone's else expense have made her worthy of the villain title and the cause of more than one dangerous incident. She has the power to create sky.

She defeated the original goddess Suwako Moriya in the great Suwa War and was the one to give Utsuho "Okuu" Reiuji her distinctive nuclear powers which she used to take over Gensokyo. She also tried to monopolize faith by shunning the Hakurei Shrine with help of her devout, Sanae Kochiya. The goddess was ultimately stopped by the heroines Reimu and Marisa.

Kanako has an elaborate red shirt with long white sleeves and a round mirror over the center of her chest. She wears a long black skirt with a red flower print hem. She has poofy intense blue hair and dark red eyes. Behind her, for decoration purposes, is a large twisting rope circle shimenawa with shide.

Kanako is an ambitious and persuasive woman who treats religion like a business, using whatever means bring her the most "profit" - that profit being faith. She has a natural presence that can seem intimidating or suspicious at times, but also reliable. Unusually for a god she has little respect for tradition - she demands little formality in her worship, and encourages scientific progress. It is somewhat strange for a deity to be knowledgeable about science.

She is also shown to be very friendly and hospitable towards humans, though as is the case with all deities, she may curse them if they are disrespectful. She also seems to be rather cantankerous, argumentative, short-tempered, and temperamental, but she is vulnerable to gifts. 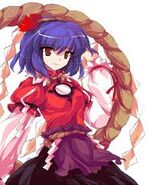 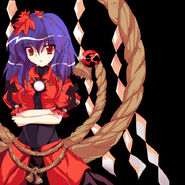 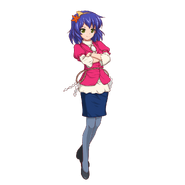 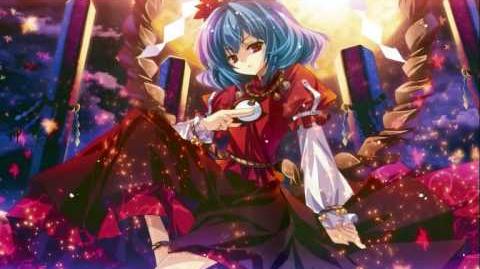 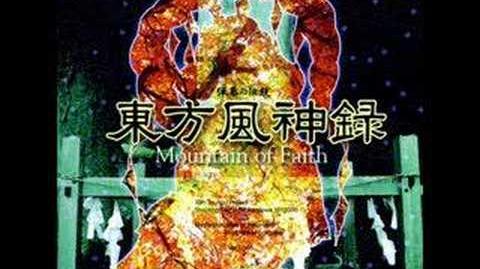 Retrieved from "https://villains.fandom.com/wiki/Kanako_Yasaka?oldid=3465741"
Community content is available under CC-BY-SA unless otherwise noted.