Get revenge on Ghost and kill him (formerly).

He was portrayed by the rapper 50 Cent, who is also the executive producer of the series.

Kanan is Ghost's former boss and mentor. He has been in prison for years because of a sketchy drug charge. He had once taken both Tommy and Ghost under his wing years ago and taught both of them everything they know. Even though he served as a advisor to Ghost's organization, he is secretly plotting against him and plans to return to the game in grand fashion.

Kanan first appears when his son Shawn comes to visit him in prison and the two catch up on everything that's been going on. During this time, Kanan hires a beautiful but deadly assassin known as Pink Sneakers to kill Ghost and his associates.

While Ghost is looking for the person that is killing off his crew, Kanan contacts him from prison and informs him that the RSK gang leader Rolla, who was a friend and protégé, is behind it, framing the gangster and causing Ghost to go assassinate him.

Sometime later, Kanan is visited by a lawyer with the news that he will soon be released from prison. Afterwards, Pink Sneakers pays Kanan a visit and he tell her that she wants Ghost dead before he gets out and that she needs to get new shoes.

Kanan is released from prison and visits Ghost, his family, and Tommy which surprises the latter. He later catches up to everything going on in the drug business. During this time, Kanan looks for Pink Sneakers, who failed to kill Ghost, and has one of her contacts named Chabo attempt to find her but fails. He kills him and later learns that Pink Sneakers is in hiding in Miami.

He orders his right-hand man Dre go to Miami and kill her before Ghost does. Kanan and Tommy meet up with the RSK gang and their new leader QDubs, which ends in Kanan killing him as the latter refused to work with him, Tommy, or Ruiz and his Soldado gang. Afterward, Kanan furthers his plot to take over the drug business and kill Ghost. After a meeting with Tommy, Dre and his crew, Kanan has Dre kill one the latter's men, Broc as he disliked him and thought he would be disloyal.

Later, He meets up with all the drug lords and gangs, including Serbian gang leader, Vladimir, Haitian gang leader Drifty, and Ruiz in order to meet up with Felipe Lobos and set up a new drug business with Kanan in charge and Lobos as their distributor once Ghost is dead. However, things change as Tommy and Lobos are arrested. Tommy is released while Lobos is still locked up and the drug lords agree to have Ghost killed. During this time, Kanan uses his son Shawn to kill Ghost.

However, Shawn fails and Ghost sends him away. Kanan is later confronted by his son, to whom he admits to using him and then shoots and kills him. Kanan has Dre get rid of Shawn's body and has a confrontation with Ghost at a warehouse and the two fight and have a bloody, fiery showdown. Ghost stabs Kanan and then burns the house down, thinking he's dead. However, it is likely that Kanan survives and it is discovered that someone broke out of the warehouse during the fire.

Kanan survives the fight with Ghost and goes into hiding in Washington D.C. at his cousin's house, but he is severely burnt and injured. After recovering, he helps robs a jewelry store and kills Dirt, who in on the heist after he opens the store's safe. He later plans revenge on Ghost once again and his cousin advises him to use Ghost's son to his advantage and then kill him.

He returns to New York City and goes to Dre's apartment and watches his daughter. When Dre returns from work at the club, he is shocked that Kanan is there and still alive. Kanan is angry that he is working with Ghost and blackmails him into working with him once again by threatening to kill his daughter. He is later seen spying on Ghost and Tommy. He later meets up with Dre, who promised to get him more information on what is going on with Ghost. Later after updated by Dre on Ghost's current event, he helps an old lady to her apartment (which was one of Ghost's old apartment) and kills her by smothering her to death.

While Kanan continues to get updates on Ghost's actions from Dre, He meets Ghost's son Tariq and introduces himself as Slim. Kanan later picks the boy up from school and the two bond. Kanan later threatens Dre about warning Ghost that Tariq was with him, reminding him that he chose himself. While Tariq watches TV at Kanan's apartment, Kanan moves behind him and tries to kill him but he stops, after Tariq revealed he resented Ghost for breaking up their family.

Thinking that he could use this to his advantage, Kanan decided to be like a father to him and slowly turn him against Ghost and he also starts to develop father like instincts towards Tariq. While Kanan is hanging out with Tariq, Jukebox later shows up to help. They tested his loyalty and Jukebox has him arrested by undercover cop Raymond Jones, where they try to force him to give up Kanan, but he stays silent and passes the test. While they are all hanging out his apartment and plan to take out Ghost, Kanan talks with his cousin and she advises him to kill Tariq, which he holds off on that. They later drug Tariq and then send a text from his phone to Tasha, showing a picture of his son and demanding a ransom.

Kanan still stays in hiding and he and Jukebox wait for Tasha to respond to their ransom demand for Tariq. Unfortunately for them, their meeting is interrupted by Dre who was looking for Tariq. Dre breaks the news to Kanan that due to Ghost being arrested, they won't be seeing any money from the St. Patricks that night. Dre also promises to pay Kanan with the money he gets from running the club since Ghost was incarcerated and left him in charge.

Satisfied, Kanan accepts the offer and no longer intending on holding Tariq hostage, Kanan wakes up Riq from his lean coma and tells him that his dad has been arrested.

After Tariq wakes up, he is shocked at the news of his father's arrest and asks Kanan what his father did. Kanan tells him whatever he did, “he did that shit” and the young gullible Tariq believes him.

Tariq goes back home to his worried family as Kanan takes joy on Ghost experiencing what he experienced in prison. Days past, with Kanan and Ray Ray turning Tariq to his side and using the teenager to rob some of the latter's wealthy friends. Kanan's reasons for this was to turn Tariq against his father just Ghost did with his own son Shawn.

Dre continues to pay Kanan but warns him to stay away from the teenager as Tommy and Tasha were getting suspicious and think of coming for him if they learn he was alive.

When Ghost is released from jail, Jukebox (realizing Ghost could access his money) seizes the opportunity and kidnaps Tariq to continues to carry on with their ransom plans to get money and kill both of them. Jukebox has Kanan track Ghost down and Kanan finally makes his move against Ghost, forcing St. Patrick into his car at gunpoint surprising him with his survival and telling him to hand over cash or Tariq will die. When Ghost protests that he just got out of jail and is a little short, Kanan is unimpressed. “Not having no money never stopped you from getting money before,” he reminds him. Ghost then decides to rob Tommy’s stash house with Kanan laughing that he'd rob his own friend and needs him as backup and an armed robbery in which one of Tommy's men dies.

As they drive to where Jukebox is holding Tariq, Ghost and Kanan have a heart-to-heart, or as close to one as these two men are capable of. “I loved you like a brother. I wasn’t going to kill you,” Ghost says, explaining his choice to take Kanan out of the game by sending him to prison. “So you just made a bad choice,” Kanan replies, stone cold as if he was dead then this wouldn't be happening. Kanan then tells Ghost that Jukebox has his son, which worries him. IT SHOULD. Then Kanan hands Ghost a gun and gives him a choice: Kill him now, or use the weapon to go in and they’ll get Tariq out together.

When the men get to the house, Jukebox quickly figures out she’s getting crossed, and she doesn’t like it. She pulls a gun on Tariq, who’s tied to a chair, and starts spilling secrets. “Tell him who you really are,” she commands Kanan, who does as she says, confessing that he’s a “no-good motherf–ker” who wanted to hurt Ghost, “so I used you.” Then, if poor Tariq isn’t traumatized enough, Kanan admits to killing Shawn, his own son and admits he'd do it again.

Juke is done with the truth-telling, so she goes to shoot Tariq, but Kanan takes her out with a round of bullets to the chest, killing his cousin. Ghost grabs his freaked-out son and hugs him, swaying back and forth. Kanan says he’ll see Tariq around, grabs the cash, and leaves.

Kanan texts Dre twice a few weeks after Tariq's kidnapping to talk business but Dre doesn't respond to Kanan's two text messages. Dre and Cristobal later send two assassins to kill Kanan. Later while Kanan is at his apartment, two assassins attack and try to kill him, but Kanan effortlessly overpowers and kills them. It is later revealed that the two assassins were members of the Hermanos Tianos, Cristobal's gang.

Kanan tracks down and confronts Tommy some time after killing the assassins. Kanan asks if he or Ghost sent the assassins and shows Tommy the assassins' dead bodies in his car trunk. Tommy denies it and tells Kanan the assassins were Hermanos Tianos because of their gang tattoos. Tommy tells Kanan Cristobal is the leader of the Hermanos Tianos and he is friends with Dre. They call a truce due to Kanan saving Tariq and Kanan leaves. Kanan forms a crew with the intention to get revenge on Dre.

Kanan then tells his men who to look out for after and is soon told about Raina's death. Kanan figures out that it was Ray Ray because Tariq had called him earlier asking him where he could find Ray Ray. He calls Tommy to let him know it was Ray-Ray who was responsible for it.

After Tariq kills Ray Ray, Kanan calls Tommy to tell him to let him speak with Ghost and they form an alliance. Kanan sits in the back seat of Tommy's car as the three men spot Dre with his new affiliation, they realize it was too risky to kill him since he was protected by the Jimenez Cartel. The three then drive off with the intention of gathering reinforcements and to carry out their plan for revenge another day. 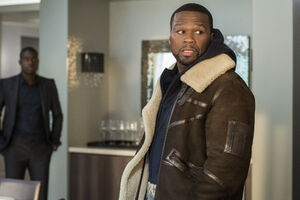 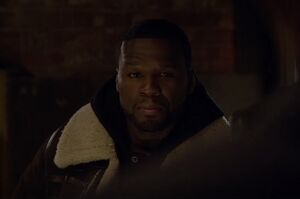 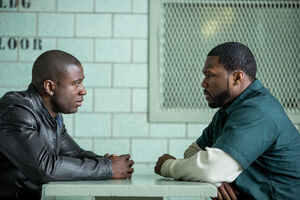 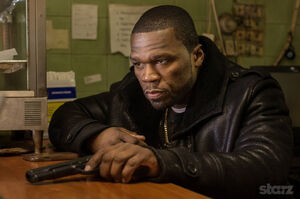 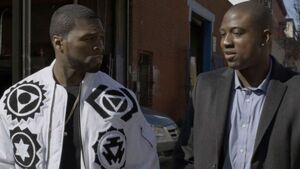 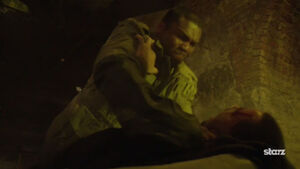 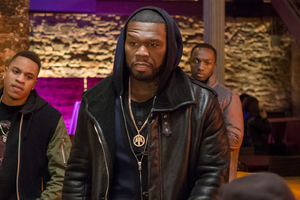 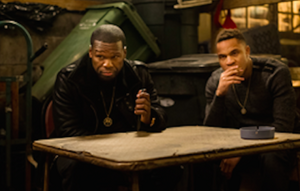 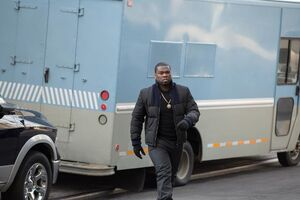 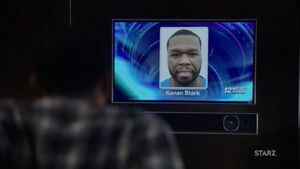 Retrieved from "https://villains.fandom.com/wiki/Kanan_Starks?oldid=4154456"
Community content is available under CC-BY-SA unless otherwise noted.