She is voiced by Yumi Shimura in the Japanese version, and by Cristina Valenzuela and Monica Rial in the English version.

She has sort of light jade-green hair that has a yellow heart with a rose attached. She wears a light orange dress with a darker orange in the middle. She has jade-green eyes.

She is sort of a comic relief villain who is always coming up with ways to steal every Rozen Maiden's artificial soul which is only shown in the form of a bright light that would correspond to the color dress it's maiden wears. Every artificial soul has a name as well. She may seem innocent but there's nothing saying that she won't pull out a handgun to achieve her goal. In fact she actually does this. But then it turns out the gun was only loaded with water instead of real bullets.

She can use a violin to create soundwave based attacks. Even when she can't use her fiddle she can still pluck a few strings. She can use a variety of different attacks using this violin.

Her artificial spirit is called Pizzicato. It is orange in color to match its owner's dress. 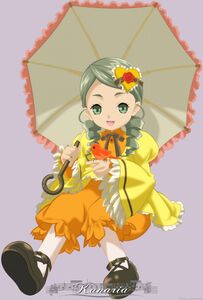 Retrieved from "https://villains.fandom.com/wiki/Kanaria?oldid=4079644"
Community content is available under CC-BY-SA unless otherwise noted.