Doting on his daughter Sonja.

Arrogant Dimwit
Kanbei is the Emperor of Yellow Comet and an antagonist in the game Advance Wars.

When the Orange Star military went across Yellow Comet to get to Blue Moon's forces, Kanbei assumed threat of invasion and declared war on them. After his Imperial forces were driven back, he consults his daughter Sonja, the head of Yellow Comet's intelligence department, for advice. Sonja asks him about what the conditions of the battle are, only to discover her father does not know. She then shares her intelligence about the current state of the Orange Star forces, advising him that good intel is the key to winning a fight.

Learning that the Orange Star force is not particularly large, Kanbei vows to crush them with superior numbers, not listening to his daughter when she tries to tell him anything else. His forces are then defeated again and he is forced to withdraw them.

Defeated once more, Kanbei again consults Sonja for advice. Sonja first advises Kanbei to construct more bases, at which point Kanbei stops listening and goes to fight Orange Star once more. After his Imperial forces are defeated yet again, Kanbei learns from Sonja that Orange Star had never intended to attack Yellow Comet and is scolded by her for not ever letting her finish what she was telling him.

Along with Sonja and his mentor Sensei, Kanbei fought to liberate Yellow Comet and Macro Land from Black Hole's grip.

While Kanbei himself does not appear in the campaign for Dual Strike, a clone of him created by Black Hole appears as an enemy for the Allied Nations COs in one of the later missions. 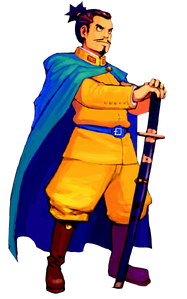 Kanbei in Advance Wars: Dual Strike
Add a photo to this gallery

Retrieved from "https://villains.fandom.com/wiki/Kanbei?oldid=3900738"
Community content is available under CC-BY-SA unless otherwise noted.