To kill "Killjoys" with Fondant Surprise

The Kandy Man is a major antagonist in the Doctor Who franchise.

He appears as one of the two main antagonists (alongside Helen A) in the season 25 story "The Happiness Patrol" and as the main antagonist of the Big Finish series "Ravenous 1". He was a robot with an outer shell made from candy and served Helen A on the planet Terra Alpha as a sadistic executioner, delighting in making torture and destruction with confectionery.

He was portrayed by David John Pope in "The Happiness Patrol" and Nicholas Rowe in "Ravenous 1".

On Terra Alpha the Kandy Man was responsible for killing "Killjoys" (people who were arrested for not being happy) by smothering them with boiling liquid candy known as Fondant Surprise. The deadly sweets were supposedly so delicious the human body couldn't cope and would overload their senses and kill them.

The Doctor returned to the Kandy Kitchen and sprayed water on the Kandy Man's feet freeing him before making him stop Fondant Surprise from being poured on a former member of the Happiness Patrol Susan Q. After this the Kandy Man tried to kill the Doctor but was once again stuck to the spot by him.

Later the Doctor returned again to the Kandy Kitchen along with his companion Ace to confront the Kandy Man forcing him to retreat to the pipes. He was later killed when Pipe People sent Fondant Surprise down the pipes causing the robot's outer shell to dissolve leaving nothing but his metal insides left which were discovered by his creator Gilbert M and Helen A's husband Joseph C.

The Kandy Man would later be reactivated, and would go onto become a mercenary working as an enforcer for various regimes. After his original body was eaten by the voracious Androgums, The Eleven, in the scientifically minded persona of The Seven, gave the Kandy Man a new, humanoid body made out of sugar spun. to be added 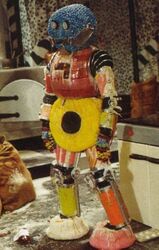 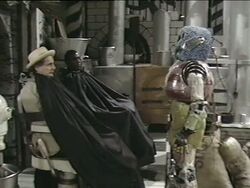 The Kandy Man with the Seventh Doctor and Earl Sigma. 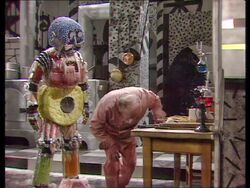 The Kandy Man and his creator and assistant Gilbert M. 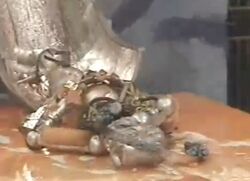