Supreme Leader of the Brotherhood of Nod

Studying Tiberium and spreading it throughout the world.

Ascend and achieve divinity alongside his followers (succeeded).

Dominate the globe (formerly).
Destroy the GDI (formerly).
Use the Soviets to cause chaos in Europe (Command & Conquer: Red Alert).
Lure the Scrins to Earth so he can obtain their technology (succeeded).
Complete the Tiberium Control Network with help from the GDI to stop the spread of Tiberium and use it to finally "ascend" (succeeded).

He was portrayed by Joe Kucan.

Kane's origins are blurred at best but his followers believe he is related to the biblical Cain and many of them see him as a holy figure, which only adds to his threat. Alas, Kane has noble goals, which is to achieve Ascension. Ascension is a portal to what Kane believes is a utopia-like place; during the events of Command & Conquer 4, Kane and the Brotherhood managed to achieve Ascension.

Using his immense charisma and oratory ability, Kane formed the Brotherhood of Nod by exploiting the disenfranchised peoples of many third world nations and rallying them to his cause, depicting himself as a "savior" and developing a fanatical cult of personality around himself. Kane and the Brotherhood remained relatively underground until a meteorite carrying Tiberium crashed on Earth in Italy. Kane immediately set about obtaining the resource and having his scientists in the brotherhood research and experiment with the resource. Through harnessing the unnatural power of Tiberium, Kane and his followers were able to greatly uplift Nod's military to be on equal footing with the rest of the world.

Once their military had been sufficiently advanced, Kane and the brotherhood began a campaign to dominate the world, triggering the First Tiberium War between the Brotherhood of Nod and the Global Defense Initiative. The GDI, a task force formed by the United Nations to contain Tiberium's spread, fought against Nod to prevent them from dominating the planet.

After a three-day siege on the Temple of Nod, the GDI converged on Kane's location. Recognizing he was about to lose, Kane calmly emerged from his command center and stood in the main hall of his temple as the GDI fired an ion cannon at it, leveling it and seemingly killing Kane in the process. Kane's fate was never confirmed however and rumors that he had survived continued to circulate.

Kane would re-emerge several decades later in the year 2030 to re-assume leadership of the fractured Brotherhood and wage war against the GDI once more. After supporting the Western Hemisphere Brotherhood in toppling the GDI-backed leader of the Eastern Hemisphere Brotherhood, Hassan, Kane united the brotherhood under him and revealed himself to be alive to his followers, beginning a second campaign for dominance of the planet, beginning the Second Tiberium War.

Though appearing perfectly fine in broadcasts, in fact half of Kane's face had been scarred and he wore a metallic mask to cover it up. Kane's research into Tiberium was aided by the emergence of the Forgotten, a third faction comprised of people who had been mutated by Tiberium. Kane manipulated the faction into aiding the Brotherhood's research into Tiberium, though the Forgotten realized when it was all too late that the Brotherhood was only using them and did not truly intend to preserve the world. With the research gained from the Forgotten, the Brotherhood of Nod was able to design the World Altering Missile, which was intended to increase the spread of Tiberium so Nod could harvest it. However, the launch of the missile was foiled by the GDI and Kane himself was personally slain by Michael McNeil.

With the Brotherhood having built itself back up into a global superpower once more, Kane re-emerged in 2047 to put forth his plans. He began by having the Brotherhood launch an attack against the GDI's A-SAT space defense systems, commencing the Third Tiberian War and triggering an immediate response from the GDI. After pushing back the Nod forces, the GDI fired an Ion Cannon at Nod's Temple Prime, obliterating it and unintentionally detonating the liquid Tiberium the Brotherhood had been developing into a bomb. The explosion of liquid Tiberium drew a third faction into the Tiberium War, the alien race known as the Scrin, who harvested Tiberium. The liquid Tiberium being blown up and attracting the Scrin to the planet was in fact all part of Kane's plan, as he sought to get his hands on the Scrin's technology.

After his seeming death in the obliteration of the temple, his second-in-command Kilian Qatar took charge of the Brotherhood and allied with the GDI to fight the Scrin. However, Kane later resurfaced and, angered at the pact Qatar had made with the GDI against the Scrin, had her executed for treason before having Nod resume its war against both the GDI and the Scrin.

Following his second apparent death, Kane was placed in a tube to regenerate by CABAL. Upon his emergence from his healing process, Kane found that the Brotherhood had been usurped by Brother Marcion of the Black Hand, who had killed Kane's second-in-command, the acting leader of the Brotherhood, Anton Slavik and taken over, framing himself as the new messiah of the Brotherhood. Seeking to retake his Brotherhood, Kane slowly built up power from the shadows, creating a new AI from the shards of CABAL called LEGION, before making his move. After capturing Marcion, Kane was able to bring him back into his fold and, deciding to remain in the shadows until fully ready to put his plans into motion, had Marcion remain nominally in power as a figurehead and puppet in order to draw attention away from himself.

Soon after, Kane discovered that one of his other top subordinates, Alexa Kovacs, was plotting to destroy LEGION out of fear it would go rampant like CABAL once had. Alexa succeeded in uploading a virus to LEGION before committing suicide, but LEGION was eventually able to recover from the damage it inflicted by 2052.

Deeming the majority of humans unworthy of the "Ascension" he had promised, Kane had LEGION awaken the Marked of Cain to serve as the new fighting force of the Brotherhood. The Marked of Kane were sent to take back the Tacitus supercomputer from the GDI, which had grown unstable due to their experiments on it and were successful in their mission Kane subsequently had Tacitus merge with LEGION and LEGION activate Kane's Tower, bringing Kane's prophecy of Ascension to fulfillment.

However, Kane's decision ally with the GDI proved controversial within parts of the Brotherhood. Dismayed with Kane's decision, numerous members of the Brotherhood broke off and formed the Nod Separatists under the leadership of Gideon to continue opposing GDI. Gideon and the Separatists waged a guerrilla war to disrupt the creation of the Tiberium Control Network, leading Kane to call for his head. Gideon's forces were eventually defeated by the Brotherhood and Gideon was captured and set up to be executed.

On the other side, Colonel Louise James of the GDI remained hostile towards the Brotherhood and sought to continue her aggression against Nod. She attempted to stop Kane from activating the TCN but failed and was killed by Kane. With the TCN fully activated, Kane used it to open a portal to finally "ascend", bidding the Commander a final farewell as he stepped through the portal before it closed, never being seen again.

Following Kane's disappearance, the Tiberium Control Network was used to contain Tiberium's spread. Despite Kane having vanished, many still believed he would return. A civilian on the street was interviewed about it and said "Kane's gone? Yeah, right."

Kane is alluded to be the true mastermind behind the events of the game, which takes place in an alternate timeline, posing as an advisor to Joseph Stalin while influencing him to cause disorder in Europe in order to advance his own secretive agenda. After the end of the conflict, Kane disappeared without a trace, with no indicators to his whereabouts besides some minor clues uncovered by the CIA.

Kane and Nod possess an alien computer known as the Tacitus, the pinnacle of humanity’s knowledge of Tiberium, and Kane uses it to weaponize Tiberium in various forms, such as the laser cannon used in Nod’s iconic Obelisk of Light.

Kane’s remarkable intelligence could be the result of an event happening after the Firestorm Crisis, which saw the defeat of CABAL after the results of the Second Tiberium War. CABAL had placed Kane in a medical tube to recover, where it tried to merge with Kane, but was defeated, creating a new kind of intelligence. Kane also used parts of CABAL to create a new AI, named LEGION.

Kane himself believes he is a prophet, and debatable he has qualities of a prophet, including that he wants to liberate the third world from the Imperialist oppressors of the GDI. He strictly believes Capitalism causes Imperialism and Fascism, which is followed by oppressing the third world for the betterment of a few people... Something he shows great disgust for. Though he is not a Communist even if he shares some of their beliefs.

If Kane speaks the truth about his arrival on earth (unknown years BC, but far before the rise of Egyptians) then it would seem Kane teaches people how to write, speak and read. Educating them and granting humanity knowledge. This can be quite possible as Kane never seems to age. It is confirmed that he has lived over 100 years without changing at all. Ironically, during World War 2 (revised timeline), he was a secret advisor to Soviet dictator Joseph Stalin. Kane has also been "killed" a couple of times during the Tiberium wars but comes back as healthy as ever.

Despite this father like act towards humanity, he has an extremely dark side... Kane is willing to experiment, mutate and go as far as outright commit terrorist attacks to achieve his goals. He himself seems to believe he is doing the right thing, and his followers seem to believe this too. Between some of the Tiberium wars, the world is more like a "cold war" stage between GDI and Nod. Most of the time they are equally powerful holding at least 40% each of the planet. Other times Nod has been shown to own almost the entire planet, this confirms that many people (especially in the third world) follow and glorify Kane.

Kane is extremely dedicated to his cause and his followers. Often putting himself in the center as the prophet. He does not seem to do this for attention, because Kane himself believes he is the prophet and thus it would make sense for him to be in the centre. Kane is the body, thought, and mind of the brotherhood. And that is why he needs to be in the center.

Among fans of Command and Conquer, several popular theories have risen attempting to explain who or what Kane really is, and several of the most common has become somewhat accepted by the fan community. 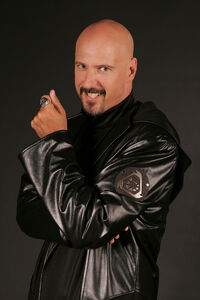 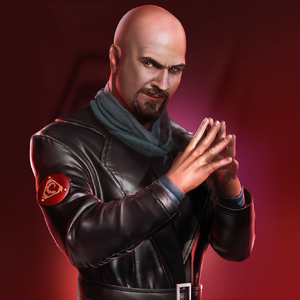 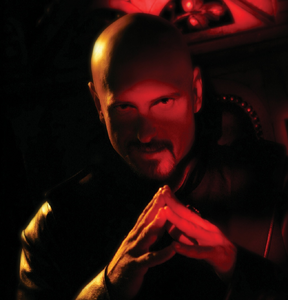 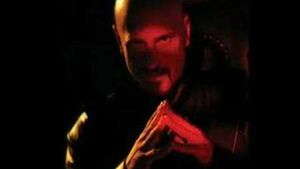 Kane's Speech Remastered
Add a photo to this gallery

Retrieved from "https://villains.fandom.com/wiki/Kane_(Command_%26_Conquer)?oldid=4157295"
Community content is available under CC-BY-SA unless otherwise noted.