Destroy the United States with nuclear weapons as revenge for the deaths of his parents.
Make North Korea earn respect.
Kill Secret Service Agent Michael Banning and President Asher.
Take over the White House (all failed).Assassinate Prime Minister Tae-Woo.
Enter the White House with the South Korean disguise (both succeeded).

Kang Yeonsak is the main antagonist in the 2013 live action film Olympus Has Fallen. He is the leader of a group of North Korean soldiers, hackers, and servants who aim to make North Korea (and to a lesser extent, himself as well) earn the respect of everyone worldwide by killing or intimidating them.

While most of the film centers on Kang working to destroy the United States, his true target is South Korea. The plan involves that destroying the country would cripple military support for South Korea, making it easier for his home country North Korea to invade their bordered neighbor. This is also demonstrated when Kang executed South Korean Prime Minister Lee Tae-Woo before the American politicians. U.S. Army General Edward Clegg revealed that Kang's mother was killed when he was a child, which drove him to insanity and seeking revenge on America.

As a child born on August 12, 1976, Kang's father was executed for crimes against North Korea. He and his mother were brought across the Korean Demilitarized Zone, but while they were crossing the border, Kang's mother was killed by an American landmine. Then, Kang founded a terrorist paramilitary organization called the Koreans for United Freedom.

He and his group brought uranium enrichment technology from Pakistan to Pyongyang in 2002. Then, Kang and his group were responsible for the 2004 bombing of the British Embassy in Seoul and were involved in a hostage crisis in Seoul in 2007. He kept himself under the radar to avoid being photographed or identified by any Western Intelligence agency.

Then, he blended into the South Korean government and poses himself as a chief of security and primary aide to South Korean Prime Minister Lee Tae-Woo.

About thirty-six years later on July 6, 2013, Kang still disguised himself as the head of security and aide for South Korean Prime Minister Lee. To ensure a reunified Korea, he and former Secret Service agent, Dave Forbes, take President Benjamin Asher, Secretary of Defense Ruth McMillan, and Chairman of the Joint Chiefs of Staff Admiral Joe Hoenig, hostage in the underground Presidential Emergency Operations Center in the East Wing of the White House. 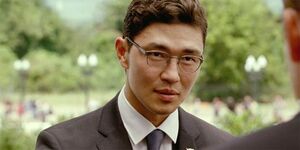 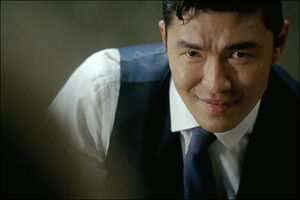 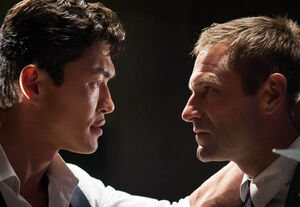 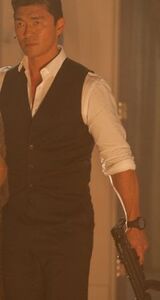 Kang after being stabbed in the head with his own knife.