Kang and Kodos are antagonists in the long-running animated comedy television series The Simpsons. They are extraterrestrial aliens who frequently appear in the Treehouse of Horror series as occasional antagonists and commentators on the events of the episodes. They are from planet Rigel 7.

Kang and Kodos are green alien-like creatures. They come from the distant planet of Rigel 7. They possess a state of the art spaceship, from which they observe life on Earth. At one point, they got bored with watching a game of Baseball and sped it up to the point of accidentally destroying the entire Universe by sucking up all matter including the Earth and God into a massive black hole. They despise the Simpson family, along with all the other residents of Springfield, and eventually humanity. Sometimes such as in the comics, Kodos is shown as female, but in the first appearance, she is similar to Kang (despite the latter saying that Kodos is his sister).

In their first appearance, Kang and Kodos take the Simpsons aboard their spaceship with the alleged intent of making them comfortable. However, a suspicious Lisa uncovers a book about "serving man" (a reference to the classic Twilight Zone episode "To Serve Man"), only to be repeatedly corrected by blowing off dust from the cover, revealing it to just apparently be a cookbook of human foods, rather than of humans.

Angered, Kang and Kodos dump the Simpsons back at their house, declaring that they now hate them and would have treated them like kings if Lisa hadn't regarded them with suspicion.

If they are veracious and truthful, this could explain their resentment towards the Simpson family (and humanity) from that point on. Of course, Kang and Kodos are also shown to be extremely manipulative and treacherous, thus is unknown as to whether or not this would be so. In several following Treehouse of Horror segments, Kang and Kodos are shown plotting world domination and attempting to pull it off.

In "Lisa's Nightmare" of "Treehouse of Horror II", Kang and Kodos invade the Earth after Lisa wishes for world peace, thus leaving Earth susceptible to attack and conquering, until Kang and Kodos and the other Rigellians are driven away by Ned's wish to repel them. In a brief scene in "Treehouse of Horror VI", the two are shown attempting to hitch a ride to "Earth Capital", getting no luck.

Their most notable conquest occurs in "Treehouse of Horror VII" segment "Citizen Kang" wherein they forcefully abduct Homer and inquire as to who his world leader is. Homer informs them of the then-upcoming election between Bill Clinton and Bob Dole, leading the two to abduct the candidates and impersonate them.

Homer manages to expose the two, but Kang and Kodos exploit the citizens' patriotic right of voting to manipulate them into voting Kang into office. The segment ends with the entire world enslaved to the Rigelians. "Treehouse of Horror IX" reveals an unusual (and naturally non-canon) truth in that Kang is Maggie's true father, having inseminated Marge during an experiment (with a specialized ray gun apparently).

He attempts to reclaim his daughter, only to be countered by the Simpsons. In revenge, Kang and Kodos set out to kill all the leaders in Washington, which the Simpsons (darkly, humorously) encourage. A later attempt at world domination is seen in "Treehouse of Horror XVIII" segment "E.T., Go Home" where Bart encounters and befriends Kodos, who is only using Bart to get information regarding the planet's weaknesses.

Nevertheless, Bart attempts to save Kodos's life, only to then be threatened as Kodos summons up a portal using a device made from ordinary objects. The portal brings in Kang and several Rigellians armed to conquer. Fortunately, they are stopped by the military that guns down all of them except Kodos who is smothered by Homer on a dissection/vivisection table.

In the introduction of "Treehouse of Horror XV", Kang and Kodos are shown preparing the Simpsons in a dinner for their boss. In a teaser for "Treehouse of Horror XXIII", they devour Krusty the Klown in a manner akin to Lady and Tramp eating spaghetti. The motif of the Season 14 DVD boxset for the series involves Kang and Kodos hosting a Halloween party at Burns' estate while attempting to kill the guests. The DVD's booklet has several thinly-hidden signs of this as well, such as "R.I.P" being altered to "R.S.V.P." and claiming that several human-eating slips (such as "meat" and "having you for dinner") are just "typos".

Kang and Kodos appear as bosses in the game that the player must defeat in order to progress. They fight with their standard ray guns.

Kang and Kodos serve as the main antagonists in the video-game "The Simpsons: Hit & Run". In the game, they are revealed to be the creators of an intergalactic reality TV show called Foolish Earthlings, focusing on the antics of the residents of Springfield. With the show's ratings plummeting, Kang and Kodos devise a scheme involving the distribution of a new and improved Buzz Cola, which is actually designed to drive it's consumers insane; after the townspeople have descended into madness, they will distribute free laser guns in the hopes of destroying Springfield and ensure huge ratings for their show.

In the end of Level 2, Bart mysteriously disappears in a bright light after helping Professor Frink with his latest invention. Lisa eventually finds him in Level 3 after destroying several government cars looking for him, but discovers that his mind has been completely erased due to his disappearance. This causes Marge to ask about crop circles in Level 4, where Grampa explains something about an alien radio with an antenna. Marge makes the connection between the crop circles and Buzz Cola, and destroys several trucks carrying the beverages. Apu follows one in Level 5, collecting several crates along the way.

Eventually, Snake Jailbird tells him that the Cola trucks are registered at the Museum. Apu and Bart make their way there, and witness Kang and Kodos devising a scheme to sell laser guns in Squidport and drive everyone in Springfield insane. Bart foils their plan in Level 6 with help from Professor Frink and Krusty the Clown by retrieving a laser gun and destroying all of the laser gun stands scattered across Squidport. After Bart destroys the laser gun stands set up throughout Squidport, he and Homer travel to the Duff Brewery to confront them, but arrive just in time to see them fly off in their spaceship.

Before they leave, however, Kang and Kodos reveal that they have already distributed Buzz Cola into Springfield's water supply, causing the dead to rise from the grave and attack the town, which will, in turn, raise their show's ratings. In Level 7, Homer sets out to stop the duo from taking over Springfield. Homer collects supplies to help Springfield survive the zombie apocalypse, and makes his way to the school, where Comic Book Guy explains that the spaceship is using a tractor beam to suck up and send trespassers to their doom, and explains that the nearby black car is a probe for the aliens.

Homer uses a Zombie Car, and follows the probe to the Nuclear Power Plant. He then comes across Professor Frink, who reveals that their weakness is nuclear waste. After sending four barrels of waste into their ship's tractor beam, Homer destroys the ship, killing Kang and Kodos in the process. Much to their confusion, they both end up in Earth Heaven following their deaths, and lament that despite that, their show has become a huge success (with Homer becoming a celebrity among the show's viewers.) The two are then forced to sit through the game's credits, much to their displeasure.

Serving as the main antagonists of the game, Kang and Kodos use their technology to begin a raid on earth, leading several Rigelians to attack Springfield's citizens. In addition, they also bring up Treehouse of Horror villains, such as the dolphins of King Snorky and the rampaging Lard Lad statue, to fight. Although defeated, the aliens nevertheless continue causing destruction, which is finally resolved when the Simpsons get God to fix everything. 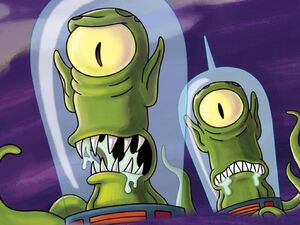 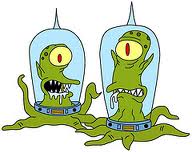 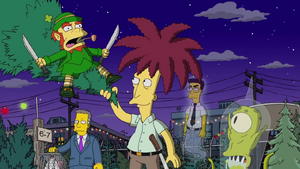 Kang in Treehouse of Horror XXVII 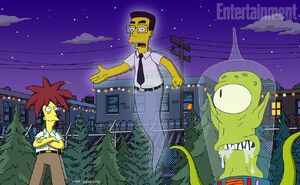 Retrieved from "https://villains.fandom.com/wiki/Kang_and_Kodos?oldid=2866567"
Community content is available under CC-BY-SA unless otherwise noted.