The history of the time-traveling supervillain known as Kang the Conqueror is a complex one. He began as Nathanial Richards, hundreds of years after the mainstream Marvel Universe takes place. The technology in his day was extremely advanced, giving him time traveling capabilities.

Humiliated at his defeat, Nathanial crafted a new persona for himself as Kang the Conqueror. He then proceeded to completely take over his world, as well as several other alien worlds, including the Shi'ar. Kang then went back in time to get his revenge on the Avengers who had defeated him. He met them in direct combat, but was once again defeated.

Shortly after, he decided to use trickery to beat them, making a robot version of Spider-Man to catch them off guard. Kang then defeated the Avengers, but not before the real Spider-Man came, destroying his robot duplicate and freeing his fellow superheroes. Kang then retreated back to his own time, to conquer and plan more before his next return.

Kang possesses a genius-level intellect, and is a master strategist and scientist. His technology is far more powerful and advanced than that of Iron Man or Doctor Doom, and has so many capabilities.

Kang the Conqueror appears in the Marvel Cinematic Universe, making his debut as the main antagonist of the TV series, Loki and will return to make his feature film debut in Ant-Man and the Wasp: Quantumania. He is portrayed by Jonathan Majors.

Kang serves as the main antagonist of the first season and the mastermind behind the Emerald Rain Project. In "Conqueror Kang" He is voiced by Jiro Saito in Japanese and by Steve Blum in English dub, the latter who also voiced Amon and Starscream.

In Avengers Assemble, Kang has a story arc in Ultron Revolution which is meant to set up the Civil War arc, but this ends up being a retcon. Here, Kang has taken over Earth in the 3000s and it's implied that he conquered the whole universe, since he said "In the future, there are no worlds left for me to conquer.". Kang realizes that AIM managed to make a portal to the future to steal from him, leading to the Avengers finding his dystopia. The Avengers find out that rebels are fighting him, and Rogers manages to fight Kang and strand him in the Jurassic. Kang's empire falls, so to take it back he finds his way to the present to join the Cabal, led by Loki. He manages to brainwash Falcon into serving him for many years but this turns out to be in order to reverse a world ending anomaly. Kang is never seen again, but it is implied that he is plotting to make a new empire in the future.

Kang serves as the main antagonist and a playable character in Lego Marvel Superheroes 2, voiced by Peter Serafinowicz. Kang travels across space and time to collect areas of different realms to build his city-base, Chronopolis, along with gathering heroes from those eras, including the Avengers.

Once Chronopolis was formed, there were energy barriers separating the realms, in which Kang had to open portals to help his villainous cohorts travel in between them. The source of the dimensional barriers was the Nexus of Realities.

Kang arrives in a local swamp, where he appears before Thor, Captain Marvel and She-hulk after they defeated the Man-Thing, and reveals to them a local swamp tree as the Nexus of Realities and Man-Thing as its guardian. Kang then throws a bomb at the tree, destroying it and lowering the energy barriers, thus allowing his forces to invade and travel through the other realms of Chronopolis with ease.

Throughout the progress of the game, Kang is at his citadel, where he is observing Chronopolis and admiring his plan in action. Kang's bride, Rovana, slyly urges him to stop his plan of conquest, but Kang strongly opposed her, prompting the latter to contact Cosmo to aid the Avengers.

Once Cosmo arrived, he helps the heroes emit an EMP signal from Knowhere that lowered Kang's Citadel's defense systems. Captain Marvel then orders the Nova Corp to attack the Citadel, but Kang's ship suddenly arrives and wipes out the entire Nova Corp. Spider-Man, Iron Man, and Star-Lord invade the Damocles and face Kang there, only to discover him as a hologram. Kang then causes his ship to crash and dispatches Korvac to assure the heroes' demise, though the heroes soon manage to escape from the ship after they defeated Korvac.

The heroes head over to Kang's Citadel and finally make their way towards Kang. In the final battle, Kang challenges Captain America as a giant hologram to face him while he terrorizes Chronopolis by using his ship as a massive sword. Once Captain America creates a giant projection of himself, he takes Kang head-on and defeats him, forcing him out of his hologram simulator. However, Kang still refuses to give up, as he now plans to use his Forever Crystal to reset time to prevent the heroes' victory from happening. However, he soon discovers that Rovanna has now sided with the heroes and secretly aided them while she takes his crystal away from him. Rovanna feels ashamed of herself for her betrayal, as she revealed her feelings for Kang. Kang tries to manipulate Rovanna into handing over his crystal, but Rovanna now stands up to Kang and uses the Forever Crystal to transform him into an infant. 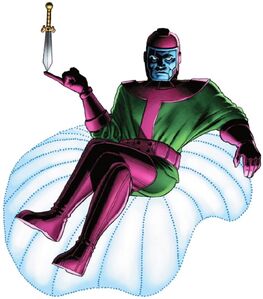 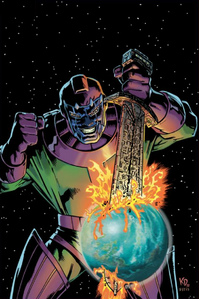 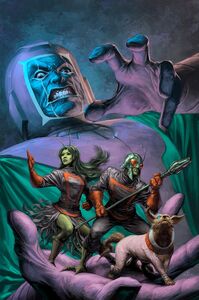 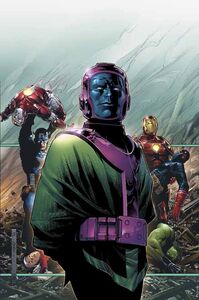 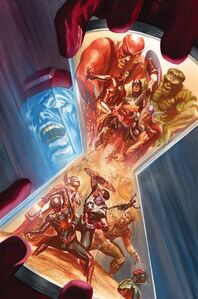 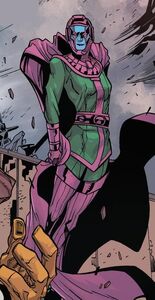 Kang in the Marvel Ultimate version of the comics. 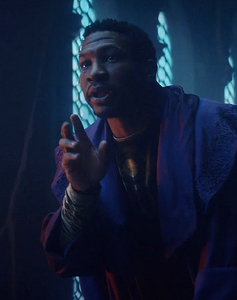 Jonathan Majors as "He Who Remains" in Loki. 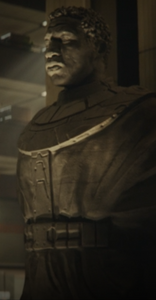 The statue of "He Who Remains'" variant, Kang the Conqueror in Loki. 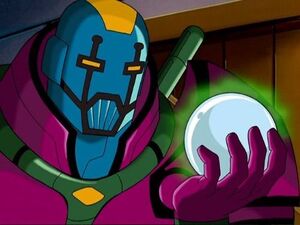 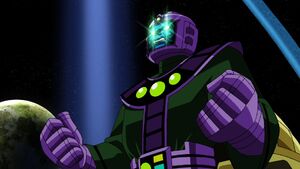 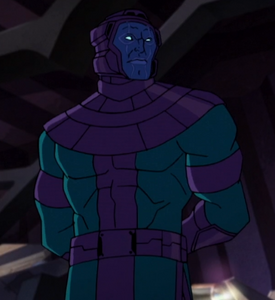 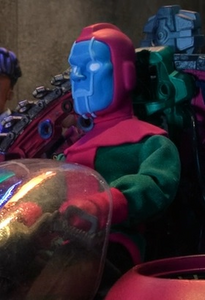 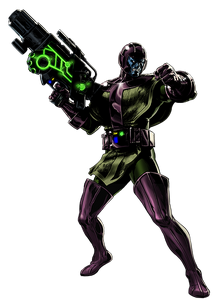 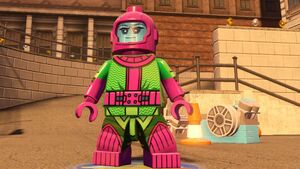 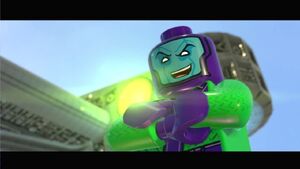 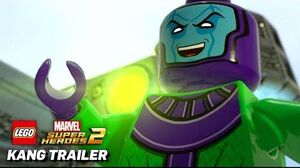 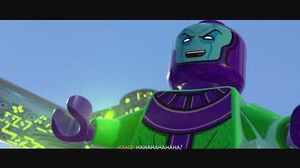 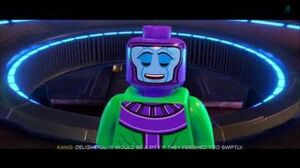