Kanjar-Ro is a smug alien supervillain and an antagonist in DC Comics, being a classic antagonist of the Justice League, as well as a recurring foe of Green Lantern and Adam Strange. He first appeared in Justice League of America #3 (February 1961) in a story entitled "The Slave Ship of Space" and was created by Gardner Fox and Mike Sekowsky.

Kanjar Ro is the self-proclaimed dictator of the planet Dhor in the Antares star system. Dhor is constantly at war with three other Antarean worlds: Alstair ruled by the plant-like Queen Hyathis, Mosteel ruled by the metal-skinned Kromm, and Llarr ruled by the lizard-like Emperor Sayyar. In his first story, he blackmails the Justice League with his Gamma Gong, and uses them to battle the other three monarchs by threatening to leave all humanity in a paralyzed state, to only be released if all three monarchs spoke Kanjar Ro's name at the same time. The League is able to defeat all three monarchs, and also defeat him, despite him taking away the monarchs' voices with his energi-rod (the League had previously recorded their voices so humanity was freed). The JLA imprisons all four monarchs on a small planet around which Green Lantern creates a power ring barrier.

Ro escapes after the four villains make a crack in the barrier with their thought waves, but leaves the other three behind. Ro makes several attempts to conquer Rann, prompting the League to team-up with Adam Strange. He first uses radiation from Rann's Triple-Star to become three times as powerful as Superman and nearly defeats the JLA, but Adam defeats him with his own Dhorite Energi-rod (like Superman is weakened by Kryptonite, Kanjar is vulnerable to Dhorite) and imprisons Ro in a prison with bars of Dhorite. For some reason the yellow radiation he released means Adam cannot stay on Rann for more than a year. While the people of the planet Rann are distracted, Kanjar Ro creates a duplicate of himself from his own aura and leaves it in his place. He then uses the auras of the Flash, Wonder Woman, Green Lantern, the Atom, and Aquaman to create doubles to draw the other members of the Justice League into various traps which Kanjar Ro has devised. The real members of the JLA are able to spot the duplicates as they do not have the same weaknesses or personalities as the real JLA members. Kanjor Ro's duplicate, upset at being left behind, reveals the real Ro's plan to the JLA, who return the camouflaged Earth back to its proper location and re-imprison the real Ro.

After the Crisis On Infinite Earths, Kanjar-Ro was reintroduced in the HawKworld miniseries as conspirator bureaucrat in the Thanagarian Ministry of Alien Affairs. This was originally intended to take place prior to the classic JLA #3, but it is later revealed to occur in the modern continuity. Kanjar's pre-Crisis history still exists, as his Gamma Gong is kept in the Justice League Watchtower's trophy room as a tongue in cheek reference.

Kanjar Ro appears in Trinity, having disguised himself as the cosmic villain Despero, in order to take his place in a ritual that takes the positions of "keystones of the universe" from Superman, Batman, and Wonder Woman. Although the ritual is successful, granting Morgaine le Fey and Enigma great power, Kanjar gains nothing, due to his deception. Revealed as a fake, Kanjar flees Morgaine and Enigma, but is confronted by an angry Despero. He barters the location of the imprisoned Crime Syndicate of America in exchange for leniency; after this, he is ignored when he demands vengeance against Morgaine, and is taken to Krona's polar base, from where he radios for the heroes to save himself from the destruction Krona prepares for Earth. In the end, as the Green Lanterns take custody of Despero's massive alien armada, he reveals he has copied Krona's files and notes and is ready to sell them to the highest bidder. He is last seen ready to sneak away from the fleet en route to the prison planet Takron-Galtos.

Kanjar-Ro is later seen in the Green Lantern Corps prison cells on planet Oa, and is present during a mass breakout. Unwilling to be killed by the rioting prisoners, The cowardly Kanjar bargains with Kyle Rayner, offering to help quell the riot in exchange for leniency on his sentence. This pact later saves Kanjar's life. The Guardians had ordered the Alpha Lanterns to kill all the escaped prisoners, and Kyle is able to convince the Guardians to spare Kanjar by citing his assistance during the riot.

After presumably being released from Oa, Kanjar Ro returns to Dhor and resumes his rule of the planet just as Starro the Conqueror begins his latest conquest. Vril Dox erects a forcefield barrier, stopping the spread of Starro's invasion, but also trapping a number of planets with the Star Conqueror, Dhor and Kanjar Ro included. Kanjar Ro is seen telling Dox he "will consider" Dox's request for his assistance in stopping Starro. After ending their communication, several members of Vril Dox's R.E.B.E.L.S. team speculate that Kanjar Ro is more likely to cut a deal with Starro to save himself rather than throw in with Dox. However, Kanjar Ro seeks the R.E.B.E.L.S.' help when Starro's horde begin their invasion of Dhor, and is denied by the Dominator Xylon. When Kanjar tries to use his gamma gong against the horde, Starro's general Smite shatters it to pieces. As Smite is about to kill Kanjar, Adam Strange, who had just heeded Dox's call for help, teleports himself and Kanjar away to the R.E.B.E.L.S.' temporary base. It is revealed that Dox had originally sent Strange to retrieve the gamma gong, not its inventor, who Dox described as a "dithering idiot." Nevertheless, Kanjar Ro is currently a member of the R.E.B.E.L.S. team.

Despite claiming to be a fearsome villain, Kanjar-Ro is mostly out of his league against the Justice League and the Green Lanterns, being only slightly stronger than the average human. Because of this, he relies on his strategic mind and on his two weapons, the Gamma Gong and the Energi-Rod. When the Gamma Gong rings, it can paralyze the entire population of a planet. With the Energi-Rod, Kanjar can shoot laser blasts, create holographic copies of others and mimic telepathic communications. The rod can also create energy restraints strong enough to hold the members of the Justice League, including Superman.

Kanjar-Ro in the DC Animated Universe. 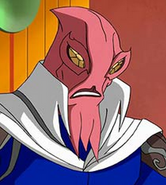 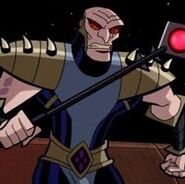 Kanjar-Ro in Batman: The Brave and the Bold.