Aside from Ed, Edd and Eddy their lives revolve around doing what girls at their ages do.

They are a trio of sisters who live in the trailer park in the outer portions of Peach Creek and are the most infamous inhabitants of the cul-de-sac. They strike fear into the hearts of all the kids and are the fears of the Eds, the latter of which they have huge crushes on and constantly seek after whenever they appear in an episode. They are also the Eds' Archenemies.

Each of them have a crush on the Eds (blonde May being into soft-headed Ed, blue-haired Marie being into intelligent Edd/Double D, and redhead Lee being into irascible Eddy) and are the cruel, merciless, sadistic, and unkind bullies of Peach Creek, attacking everyone in the cul-de-sac as well as the school they attend to no end.

The origins of the Kankers are convoluted. While they are definitively sisters and all live together, they appear to have three different fathers but only one mother. This seems to suggest that they are actually half-sisters, sharing a mother but each having a different father, which would explain the lack of physical resemblance between them. They are also the archenemies of the Eds.

They were introduced in "Nagged to Ed". They live in the "Park n' Flush" Trailer Park. Although they are obsessed with the Eds, they still torment, tease, and torture them, although usually in an exaggerated "lovey-dovey" way. However, it didn't help that the Eds were particularly demanding of them in said first appearance, though the Kankers' response still counts as Disproportionate Retribution especially as the series went on.

Many episodes conclude with the Eds encountering unwanted kisses from them or being sexually harassed by them. While all three sisters apparently love all the Eds, May prefers Ed, Marie prefers Edd, and Lee prefers Eddy, though Eddy seems to be the most tormented of the three. For obvious reasons, the majority of the cul-de-sac seem to fear them. The Kankers' idea of a vacation is a trip with their trailer to Eddy's house. On other occasions, they have shown incredible strength and brutality, such as when they literally caused the cul-de-sac to break apart when searching for their lost ship-in-a-bottle (taken by a sleepwalking Ed), rendering it into a scene out of a post-apocalyptic film.

However, Rolf managed to be unaffected by this as he hid when he saw his farm animals sensing the coming danger. The Kankers are essentially the equals of the Eds, who cycle through feelings of love and hate for them. Sometimes, they become manically possessive towards the Eds; other times, they will simply yearn for romance; and sometimes they simply abuse them. At first, the Kankers appeared to be kind-hearted, performing domestic services for the Eds such as cooking and washing clothes. However, when the Eds began to push their luck, the Kankers felt rejected and felt the compulsion to torment the Eds ever since.

The lives of the Kanker sisters apparently revolves around activities such as painting their toenails, stylizing their hair, and reading such literature as Hub Cap Digest. Their trailer holds a large amount of nautical-themed items, such as "Fish Bowl 2", a stuffed swordfish, an anchor, a diver's helmet, and a ship in a bottle, which is a prized possession. These sharply contrast with advertisements for car parts, a perfume of their own design called "Krankshaft No.5," and a penchant for wrestling and abusing each other (especially May by Lee and Marie).

The Kanker sisters act as the secondary antagonists and later anti-heroes in the film. During the film, the Kankers first appear when Jimmy and Sarah try to seek out the Eds with the hopes of watching them get beaten. The Kankers start tormenting Jimmy and then Sarah, who tries to protect Jimmy until he reveals the other cul-de-sac residents' intent to hunt down the Eds. Determined to save their "boyfriends", the Kankers force Jimmy and Sarah to cart them along the path earlier taken by the Eds. Thanks to Sarah's ingenuity, she and Jimmy manage to escape the Kanker sisters, leaving the three to relentlessly pursue them.

Along the way, the Kankers capture Kevin, Nazz, and Rolf in an attempt to "save" the Eds but they didn't manage to capture Jonny as he was in the bus full of other people. Once they find the Eds at the trailer of Eddy's brother, they prepare to assault the Eds once more until they're cut off by the appearance of Eddy's brother. Like the other kids, the Kanker Sisters are horrified by Eddy's Brother's abusive treatment of Eddy, with May and Marie holding back an enraged Lee. After Eddy's brother's defeat by Ed unhinging the screen door of the trailer, the Kankers are last seen dragging Eddy's brother's unconscious body into the trailer with amorous intents, likely intending to sexually harass him.

Lee is the oldest of the sisters and is the most dominant and imperative of the trio. She is also the most aggressive, the most ruthless and gets angry very easily. She often tells her sisters what to do, where to go and plays the role of leader. She is very dangerous when she gets angry because she won't think rationally. She likes Eddy, who just like her gets angry very easily, albeit not as dangerously as her.

Marie is the middle of the sisters and is considered to be the smartest. Unlike Lee, Marie thinks more often and tries to think about the next move instead of acting on impulse. However, this doesn't change the fact that she easily gets mad when something really upsets her. She can also be very jealous, especially when a girl flirts with Edd, e.g. Nazz. She has the shortest hair which has a unique blue color. She likes Edd, who, apart from the intellect, is her complete opposite.

May is the youngest of the sisters and is a "stereotypical dumb blonde". May is very cheerful, but also naive and not very smart. She is also the "nicest" and most individualistic of the sisters, but when something upsets her she can fall into a big frenzy. Despite her stupidity, May has extensive knowledge in the field of chemistry. She likes Ed, who like her is not very smart and extremely playful. Unlike her older sisters, May really likes Ed for who he is, not the idea of tormenting him, as shown when she wanted to give him a valentine for Valentine's Day of her own free will, and when he turned it down, she was devastated and cried all alone. 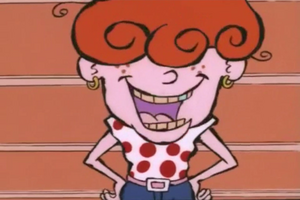 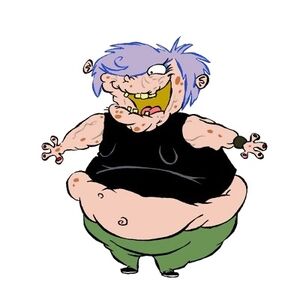 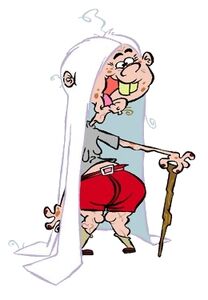 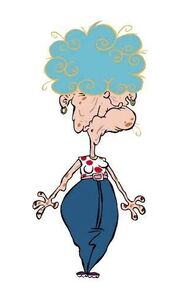 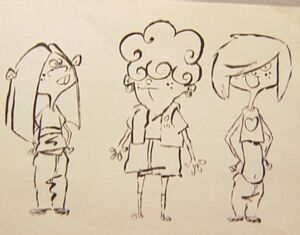 The original design of the Kanker sisters.

The Kankers playing Spin the Bottle.

The Kanker sisters in a promo for the show.