NOTE: This article is about the incarnation of Kano (2021) from the Mortal Kombat (2021). The mainstream version can be found here: Kano.

Kill the Reptile.
Help Sonya Blade and Cole Young find the temple of Raiden, for the large price of money.
Free his Arcana.
Close the force field at Raiden's Temple for Outworld warriors (all succceded).
Kill Sonya Blade (failed).

Kano is a major antagonist in the 2021 Mortal Kombat live-action movie. He is an obnoxious mercenary who is one of the most wanted criminals in the world and an arms dealer of the Black Dragon. He is one of the remaining champions of the Earthrealm with the Dragon's mark in his body.

He is portrayed by Josh Lawson.

Kano became a mercenary and leader of the Black Dragon. In an unknown period of time, he murdered a man with a dragon mark on his body that passed over to him. This man was wanted by Sonya Blade. Sonya arrested Kano and took him to her base where he was held.

When MMA fighter Cole Young, who has the dragon mark on his body, came to Sonya's hideout because Sonya's friend Jax told him to go there. During the conversation, Kano insults Cole and Sonya several times, causing Sonya to hit him. However, an assassin who was ordered by Shang Tsung to kill Cole Young showed up. Using invisibility, he managed to defeat Cole, Sonya and cut Kano's face. Kano managed to break the handcuffs when Reptile's saliva flew over the handcuffs. Kano stabbed a flare into Reptile to see him, then began to fight him, and managed to kill him by ripping his heart out.

After Sonya promised to give Kano money, he agreed to get Sonya and Cole to Raiden's temple. Kano enlisted the help of a friend who can fly a plane. After landing on the desert, Kano uses his GPS to reach Raiden's Temple, but due to his laziness, he decides to rest, which causes Sonya to take the GPS and give's this to Cole. Kano starts accosting Sonya, claiming that she is jealous of his dragon mark and she can take it from him if she kills him. Kano attacks Sonya, but she doesn't kill him and lets him go.

After a long journey, Liu Kang finds them, and Kano begins to approach him with a knife, which causes Liu to shoot him with fireball in self-defense. Liu begins to say that they are not enemies and will lead them to Raiden's temple, Kano, surprised by his abilities, asks him if he will get superpowers just like him, then Liu tells him that it will take time and leads them to the temple.

Liu Kang leads them to Raiden himself, who criticizes the warriors' abilities, then Kano calls him Gandalf and asks him "what is his fortune cookie" and is struck by Raiden who says that Kano is weak and arrogant. Raiden agrees to let the warriors train. However, Sub-Zero finds their whereabouts and attacks Liu Kang who is assisted by Kung Lao. After a short fight, Shang Tsung shows up with Mileena and Sub-Zero to kill the warriors of Earthrealm. However, they are hindered by Raiden who creates a force field preventing the Outworld warriors from entering the temple.

After that, training begins to Earthrealm warriors get their Arcana. Kung Lao fights Cole Young and defeats him, and Kano fights Liu Kang who effortlessly defeated him. In the evening, the warriors sit down to dinner, in which Kano rudely tells Kung Lao to pass him a egg roll and Kung eats it. The angry Kano starts insulting him, and Liu asks him why he wants to harm the person he can survive and calls him a young aggressive bunny, which makes Kano more angry.

Kano then starts asking them if they know who they are, then replies that he is wanted in 45 countries for things they can't imagine, then things get worse and Kano releases his Arcana which is a laser from his eye. Kano's surprise turns to joy and he asks Kung Lao if it was Arcana, and Kung Lao looks pleased. Kano enjoys his power and tells Liu Kang that it is better than his fireballs and calls him "pussy".

The next day, Kano battles Cole Young as part of training and defeats him. Raiden asks Cole for a talk in which he explains to him that he thought Cole would be able to help them because he is a descendant of Hanzo Hasashi, but says that he was wrong and creates a portal for Cole to his home. At the same time, Shang Tsung introduces Nitara to Mileena, Reiko and Kabal, and tells them that they need a way to break through the force field. Kabal replies that he can help, then explains that there is a Kano in the temple that he know's with and that he can be bribed. Then Prince Goro comes in to help Shang Tsung defeat the forces of the Earthrealm.

Kano notices Kabal as he walks by the force field. He goes to the force field and talks to him and is bribed with the money the Kabal has promised to give Kano, if he disables the force field, Kano agrees to it. He disables them by his laser eye, and the warriors of the Outworld enter the temple. The Outworld Warriors interrupt the training of the Earthrealm warriors, and then Kano also comes. The fight begins between Liu Kang and Kabal, Mileena and Sonya, Reiko and Jax and Nitara and Kung Lao.

When Mileena defeats Sonya, she is attacked by Kano who throws her under the rubble of the temple. After the death of Kung Lao at the hands of Shang Tsung and saving the Earthrealm warriors by Raiden from the death, Cole Young (who managed to activate his Arcana by killing Goro), decides to defeat Outworld warriors and asks Raiden if he can send anyone anywhere, to which Raiden answers yes. Liu Kang is going to defeat Kabal, Cole Young to defeat Mileena, Jax to defeat Reiko and Sonya to defeat Kano.

Kano is teleported to Sonya's hideout, who is already waiting for him there. Kano steps in and is stabbed in the leg and Sonya throws a knife in the back. The two fight each other, Sonya throws acetone at Kano's eye so he can't use his laser. Kano throws her out the window and begins to choke her, however Sonya takes the garden gnome and stabs Kano's eye with the tip of the gnome's hat, killing him. After this Kano's dragon mark passes to Sonya, who frees her Arcana and goes to help Liu Kang and Cole Young in a fight. 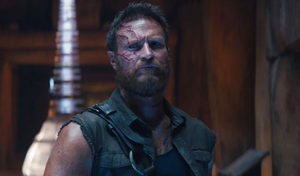