Immortal Assassin
Kanto is an antagonist in the Superman media. He is a "New God" of the Apokolips world, and the loyal main assassin of Darkseid. Both his appearance and personality are modeled after where he spent his exile; the Italian Renaissance.

Real name Iluthin, Kanto is one of Darkseid's most powerful assassins. He was sent to Earth by Darkseid to supply greedy criminals Apokolipitan weapons. Mannheim was suspicious about Kanto giving them free weapons. Kanto introduced his boss to Mannheim when the latter followed him to Apokolips.

In the comics, he often wears the clothing and personality of a nobility-bound medieval European assassin.

A student at Granny Goodness' orphanage, Kanto is accused by Kanto 13 and others of stealing Darkseid's weapons and is punished accordingly. He is exiled to Earth during the planet's Renaissance era. Once there, he trains under Italian teachers and even falls in love with a woman named Claudia. Kanto 13 tracks Iluthin to Earth and ends the life of Claudia at their wedding, leading the two to battle until Kanto 13 falls, and is taken out by Darkseid for failing his mission. This leads Kanto returning to Apokolips to serve Darkseid.

In the Amalgam universe, Kanto surprisingly had the same name when he served under Thanoseid. But his origin in this case had aspects of Validus, when it was revealed that he was the time-lost son of the Steve Trevor/Frank Castle fusion and the Amalgam version of Princess Diana, who in Amalgam lost out on being Wonder Woman to her adopted sister, Ororo Munroe, normally Storm. Thanoseid had raised him not only as an assassin but as a trap, hoping to one day trick his parents into killing him. This effort failed, and this version of Kanto indicated he might join his parents' side one day.

Being a "New God", Kanto was a few different superpowers. One of these powers included immortality. This means that he can never die of age, but he may still be killed in other ways. He was also granted the power of telekinetic resistance.

Kanto is also a trained assassin and is a master of swordsmanship. He picked up some of these hands-on forms of combat during his time in exile.

Kanto appeared in Superman: The Animated Series again serving Darkseid. He was seen teaming up and helping Bruno Mannheim. He appears in eight episodes, and is voiced by Michael York.

Kanto appeared in Justice League Unlimited siding with the forces of Virman Vundabar during the civil war on Apokolips against Granny Goodness.

Kanto appeared in the Teen Titans Go! series. He makes a comic appearance only.

Kanto made an appearance in the Lego DC Universe as a playable character. 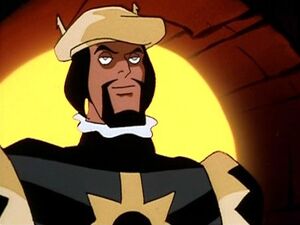 Kanto in Superman: The Animated Series. 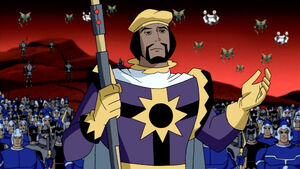 Kanto in the Lego DC Universe.