Agent of the Perseus spy network
Member of the Warsaw Pact

The daughter of one of the most feared Yakuza bosses in Kobe, Kaori would have to prove herself by becoming a prolific cat burglar in an attempt to join the criminal underworld. Wanting to prove herself, Kaori would become a member of the Perseus Spy Network and assisted Vikhor "Stitch" Kuzmin in uploading the numbers broadcast to activate his sleeper agents.

She is voiced by Erika Ishii and Akemi Look [1].

Kaori Tanaka was born on December 12th, 1956 in Kobe, Japan to one of the most feared Yakuza bosses in her country, and also had two unnamed brothers as well. Kaori grew wanting to join the Yakuza, and knew at an early age that she would have to earn the respect of her father and the criminal underworld. Reaching the age of fifteen, Kaori had earned the respect of every boss in Kobe, but she still wasn't allowed to join the Yakuza due to her gender. Though equally frustrated by this, Kaori refused to give up and became more driven to prove herself to the Yakuza. While her brothers played politics, Kaori went through training in martial arts by her bodyguard, and became an expert hacker by speaking with hacker groups in Japan.

Becoming one of Kobe's most prolific cat burglar, Kaori would target tech companies that were on the rise, breaching their security systems that they thought were unbreachable. Though successful in the criminal underworld as a cyber criminal, Kaori's ambition and growing tension with her family pushed her to want to achieve more. Due to her talent, she gained the attention of Perseus, a rogue Soviet agent who held disdain for the United States influencing his country. It's assumed that Perseus was able to impress Kaori with his spy network, and she decided to join his cause.

In 1984, Kitsune was assigned to fellow Perseus agent Vikhor "Stitch" Kuzmin, who wanted to brainwash American soldiers and have them act as sleeper agents. After getting the American satellites removed by Owethu "Jackal" Mabuza, Stitch assigned Kitsune to infilitrated a NATO station in West Berlin to upload Nikita Dragovich's numbers broadcast. While it was uploading, Kitsune was confronted by CIA operatives under the command of Frank Woods, but most of the operatives were brainwashed by the broadcast and turned on each other. Amidst the confusion, Kitsune watched Woods escape with operative Stryker as she left on a helicopter with the brainwashed soldiers. 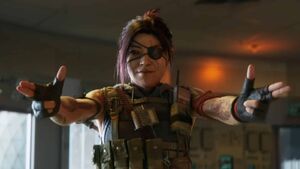 "Bang... Bang..." Kitsune as the broadcast is launched.

Kitsune confronted by Woods and his team as they are brainwashed.