Trying to take over Skylands with her son (later by her self).

Complete her plans her own way and not Kaos'.

Kaossandra, more commonly known as Kaos' Mom, is the mistress of darkness, the mother of Kaos, and the central antagonist of Skylanders: SWAP Force, and a major character of Skylanders Academy. She aids her son in his latest plan to take over Skylands until his first defeat, after which she decides to rule Skylands for herself.

She was voiced by Christine Baranski in the video game series, who also played Amelia von Butch in Scooby-Doo! in Where's My Mummy? and Chef in Trolls and by Catherine O'Hara, who also played Ludmilla in Bartok the Magnificiant.

100 years ago, Kaossandra launched an attack on the Cloudbreak Islands where the Ancient Elementals were performing their ritual that would restore magic throughout Skylands. The SWAP Force Skylanders repelled the attack but got caught in the volcanic eruption that banished them to earth. Despite Kaossandra's failed attempt, her plan turned out to be successful as the Skylanders were banished from Skylands, leaving Cloudbreak Islands unprotected for many years.

Years later, Kaossandra appeared on Kaos' magical television, fooling her son to be a grim reaper. After a few funny moments, she scolded Kaos for making his plan draw too much attention, but Kaos didn't take her advice and rudely switched the television off. When Kao's planned on evilizing the Ancient Terrasquid, Kaossandra contacted him and questioned about his plan on dealing with the Skylanders, to which Kaos responds by sending his Fire Viper of Doom after the heroes.

Kao's Mom later came to Kaos' Kastle in-person to help her son in his plan, also bringing a few friends, including the evil puppeteer, Mesmeralda. After the Skylanders defeated Kaos and kept him tied up by ropes, Kaossandra interrupted the volcano celebration and kidnapped Tessa, and also rescued Kaos. The Skylanders, Flynn, and Sharpfin embarked on a mission to save Tessa, infiltrating Kaos' Fortress before confronting the mother of all evil herself. Just before her battle, she appeared revealing herself as a true dark Portal Master and that her power knows no equal to Kaos. She was soon defeated by the Skylanders when her own dark magic rebounded off Kaos' mirror, and the force of that power pulled and trapped her within the said mirror. Kaossandra soon called Kaos for his assistance and soon discovered that Kaos went on to the Cloudbreak Volcano to proceed with his own evil plan. Despite being betrayed, Kaos' Mom praised her son for his treacherous nature. It is unknown whether or not she will escape and make a return.

In Skylanders Superchargers, despite still being trapped in a mirror, Kaos's Mom is able to send her son books of advice, much to his annoyance.

Kaossandra has proven to be more ruthless, cunning, loathsome, and villainous than her son, and she did not share Kaos' overwhelming arrogance, thus making her the smarter of the two. Although she shares the same cruelty and hatred towards the Skylanders did, she was smart enough not to underestimate them, while being confronted by the Skylanders she even spoke to them in a safe and somewhat motherly tone of voice. In the end, she proved to be selfish, prideful, and egotistical, stealing the Skylands from Kaos right under his nose and claiming herself "a true Dark Portal Master" in contradiction to her son. She has also shown to frequently enjoy putting down Kaos but in the end, he proved himself to be more evil by leaving her to the mercy of the Skylanders, something which she praised him for. She seems to have a positive attitude towards her villainy, as evidenced by her quote; "Oh, lighten up, Kaos! What's the point in being so deliciously evil if you can't enjoy it? You know, when I attacked the Cloudbreak Islands, I did it with an evil smile on my face!". 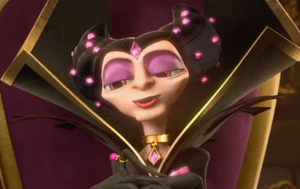 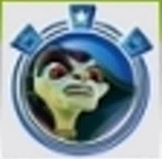 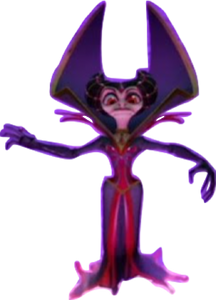 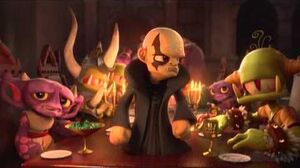 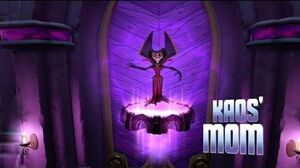